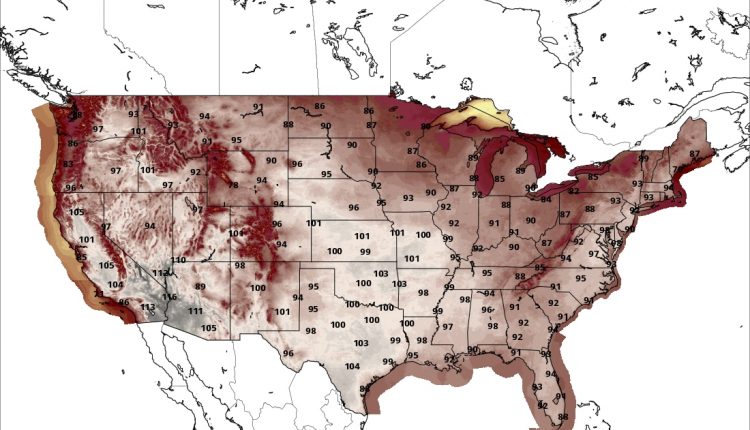 US heat wave: 100 million under alerts from Phoenix to Boston

More than 100 million people in the Lower 48 states are under heat alerts on Thursday amid relentlessly sweltering temperatures that have soared as high as 115 degrees in recent days.

About 60 million Americans in at least 16 states are set to experience triple-digit highs Thursday; an additional half-dozen states could see the mercury reach the upper 90s.

Excessive-heat warnings or heat advisories cover several regions, including California’s Central Valley; Las Vegas to Phoenix in the Southwest; San Antonio to Birmingham, Ala., in the South; and Myrtle Beach, SC, to Boston along the East Coast.

In Texas and Oklahoma, where many places are enduring one of their hottest summers on record, highs well above 100 degrees are expected for the foreseeable future. Both states made it to 115 degrees Tuesday, and while temperatures are comparatively lower Thursday, they will still be dangerous for vulnerable groups.

Major cities in the Northeast will experience highs near 95 degrees Thursday and will feel 5 to 10 degrees hotter with suffocating humidity levels. Even more-intense heat is forecast this weekend: Washington could reach 100 for the first time since 2016.

DC Mayor Muriel E. Bowser has declared a heat emergency in the city until Monday.

The US heat wave, which has set at least 60 records, peaked this week as a historic bout of exceptional temperatures killed more than 1,000 people in Europe. Britain set a record-high temperature Tuesday as several stations exceeded 40 degrees Celsius (104 degrees Fahrenheit) for the first time ever.

While summertime is bound to be hot, the trend toward increasingly severe and long-duration heat events bears the fingerprint of human-induced climate change.

So far this week, 60 daily high temperature records have been tied/broken as dangerous heat enveloped much of the nation. Some notable records include all-time highs being tied in Salt Lake City, UT and Abilene, TX. More records are likely to be set over the next week. pic.twitter.com/uI1JeHIwcW

The nation’s most intense heat Thursday is focused in the Southwest. The National Weather Service warned of a “high risk of heat related illness” in Las Vegas, where highs are forecast to top 110 degrees through Friday.

⚠️ It’s going to be a hot next couple days for Las Vegas but much of southern Nevada and northwest Arizona.

The Weather Service also warned of “dangerously hot conditions” in Phoenix, where highs are predicted to reach 110 to 115 degrees. The city is also under a pollution advisory because of high levels of noxious ground-level ozone.

Highs could top 120 degrees in Death Valley, Calif., through Saturday.

Heat waves are getting hotter and more frequent. Here’s how to prepare.

Heat in Texas and Oklahoma

The heat in Texas and the Southern Plains has been unforgiving this summer, with San Antonio, Austin and Houston enduring their highest temperatures on record. There’s little sign of relief.

On Tuesday, every one of the Oklahoma Mesonet’s 120 weather stations logged a high temperature at or above 103 degrees for the first time. The Mesonet has been operational since the mid-1990s, meaning the period of record is limited. Regardless, the heat was blistering.

At least 24 Mesonet sites set their all-time record highs yesterday according to preliminary data. There are a few newer stations in there, but plenty to show this day matches up heat-wise with any in the Mesonet temperature era, dating back to 1997! #okwx #okmesonet pic.twitter.com/uVSPIyqYVx

Oklahoma City spiked to 100 degrees Wednesday and has reached the century mark for five straight days. When it hit 110 on Tuesday, it was only the second such instance since 2012. High temperatures there are forecast to remain in the high 90s or low 100s for the next week, at least.

Mangum, Okla., jumped to 115 on Tuesday, as did Wichita Falls, Tex. While sweltering, those temperatures were still shy of the 120-degree reading at Altus in southwest Oklahoma on Aug. 12, 1936. That’s the all-time state record.

About a dozen small wildfires cropped up in Oklahoma’s Red River Valley and north-central Texas, the largest of which is in Somervell County just southwest of the Dallas-Fort Worth metroplex. The Chalk Mountain Fire has torched 6,339 acres since its ignition around 2:30 pm Monday. It is only 10 percent contained.

Attempted calculation showing departure from average number of hours with at least 100°F heat index so far this year. All heat index reports are considered (ie when less than air temp). X’s denote stations with max values ​​this year vs 1973-2021. pic.twitter.com/SlFabOUm31

Dallas, Austin, San Antonio and Tulsa will remain at or above 100 degrees for at least the next week, while areas farther to the south and east — Houston, Little Rock or Shreveport, La. — will be in the upper 90s. Those subtly lower air temperatures will be offset by greater humidity wafting in from the Gulf of Mexico, contributing toward heat index values ​​in the 105-to-110-degree range.

Much of the zone from Louisiana and Arkansas to Georgia is experiencing one of its 10 hottest summers, and temperatures will remain sweltering there through early next week. Highs are forecast to range from 90 to 100, but oppressive humidity levels will create the feeling of 100 to 110.

We have an excessive heat warning in effect for our western counties through 7 pm tonight as heat index values ​​will reach near 110 degrees. A heat advisory in effect for all but the far eastern counties through 7 pm tonight where heat index values ​​will range from 105-108 degrees. pic.twitter.com/AXiP6KCOZq

Birmingham, Ala., is under a heat advisory Thursday, with temperatures projected to peak around 95 degrees. Western Alabama may see highs in the upper 90s. While daytime highs haven’t been particularly impressive there from a records standpoint, the overnight lows have been.

“We had a low temperature of 79 degrees yesterday [Wednesday] morning,” said Jason Holmes, a meteorologist at the Weather Service office in Birmingham. “Having the nighttime low temperatures like that — it’s hard for your body since you don’t cool down.”

What does extreme heat do to the human body?

Heat in the Mid-Atlantic and Northeast

Hot and humid conditions are expected today. Scattered showers and thunderstorms will develop this afternoon, mainly south of Washington, DC. A strong to severe storm with damaging winds is possible. pic.twitter.com/XSmE4p1YZA

The Mid-Atlantic and the Northeast had been largely spared the heat and humidity this summer, but that is rapidly changing.

Temperatures are forecast to reach the 90s from Richmond to Boston on Thursday, with heat index values ​​in the triple digits.

While humidity will ease some on Friday behind a weak cold front, oppressive mugginess returns over the weekend.

Instigating the heat is a ridge of high pressure known as a “heat dome,” which is centered over the Southwest but is flexing at times as far east as the Mid-Atlantic.

Beneath these heat domes, the air sinks, clearing out cloud cover while allowing the sun to beat down relentlessly. Atop the heat dome is the jet stream, marking the southern periphery of cooler weather.

Over the weekend, the jet stream will take a dip toward the north-central United States and Great Lakes, ushering in cooler air in those areas. However, as that cooler air arrives, strong-to-severe thunderstorms may erupt Saturday.

Weekend Events for Prescott Valley and Beyond for July 22, 23, and 24