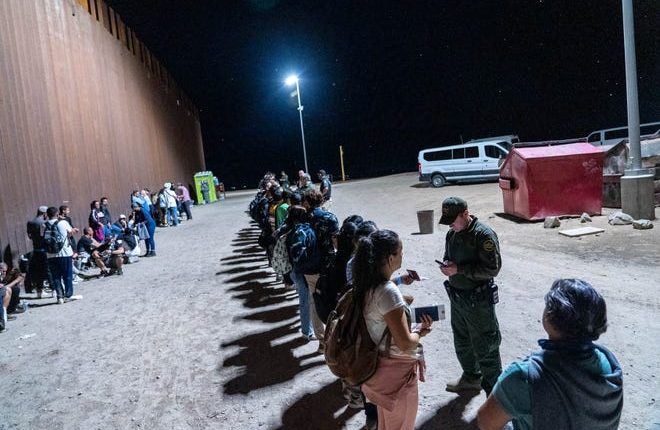 Encounters along the US-Mexico border surpassed 2 million for the first time in one year, according to recently released US Customs and Border Protection data.

There have been more than 2.1 million arrests along the border so far in the fiscal year 2022, which ends on Sept. 30, largely exceeding last year’s number of more than 1.7 million arrests, according to CBP.

The number of encounters at the border increased slightly from July to August, with a total of 203,598 encounters recorded last month. Twenty-two percent of the encounters in August involved people who had at least one prior encounter in the prior 12 months, CBP said.

The Border Patrol’s Tucson Sector saw more than a 10% increase in encounters, going from 17,709 encounters in July to 19,574 in August. So far this fiscal year, the sector has recorded 238,820 encounters.

The Yuma Sector saw a decrease in encounters of less than 1% from July to August, according to CBP. The sector has seen 284,078 encounters so far this fiscal year.

Migrants from Venezuela, Cuba, and Nicaragua accounted for more than one-third of unique nationwide encounters in August, which doesn’t include people who had a previous encounter in the past 12 months, per CBP. The number of migrants from those countries is up 175% from August 2021.

“Failing communist regimes in Venezuela, Nicaragua, and Cuba are driving a new wave of migration across the Western Hemisphere, including the recent increase in encounters at the southwest US border,” CBP Commissioner Chris Magnus said in a written statement.

“Our dedicated teams of skilled agents continue to work around the clock to secure our border and safely and humanely process and vet every individual encountered, but those fleeing repressive regimes pose significant challenges for processing and removal,” he said.

Strained relations with those three countries make it more difficult for officials to send people back. In August, the number of migrants encountered along the southern border from Venezuela, Cuba, and Nicaragua was nearly the same as the number of migrants from Mexico, El Salvador, Guatemala and Honduras, according to CBP.

The number of migrants from Mexico, El Salvador, Guatemala and Honduras decreased for the third straight month and is down 43% from August 2021, according to CBP.