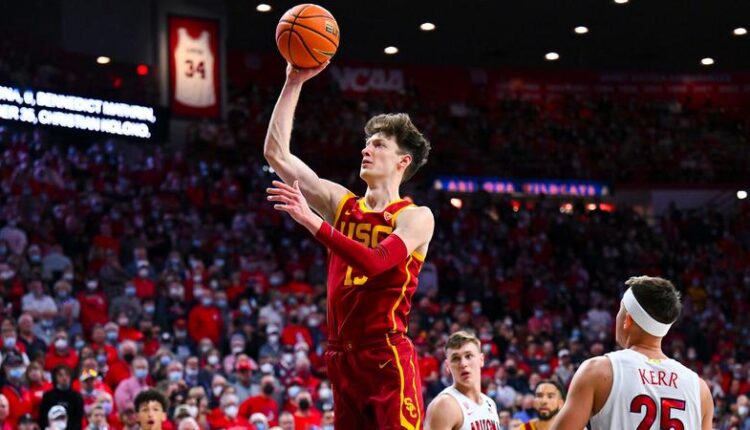 Leading scorer Boogie Ellis had 11 points on 2-of-11 shooting with four turnovers.

Wildcats coach Tommy Lloyd changed up his starting lineup in hopes of shaking up Arizona’s struggling offense and unproductive bench.

The Wildcats (16-3, 5-3 Pac-12) had a much better flow with Cedric Henderson Jr. starting and Pelle Larsson coming off the bench, racing to a 15-point halftime lead.

Arizona bogged down a bit in the second half, but shot 48% from the floor and 12 for 24 from 3 after failing to eclipse 38% in four of its last five games. Larsson had 15 of Arizona’s 21 bench points.

USC played one of its best all-around games in a 71-56 win over Utah on Saturday.

Against Arizona, coach Andy Enfield used 11 players in the first half, trying to find a combination that worked. Vincent Iwuchkwu played 15 minutes in the effort and scored his first four points of his career.

USC had trouble stopping Tubelis and Oumar Ballo in the early post while struggling with Arizona’s offensive movement through most of the first half.

The Trojans were disjointed offensively from the opening tip, struggling with turnovers and getting shots to fall. USC shot 11 of 34 and had nine first-half turnovers.

The Trojans tried to cut into the lead in the second half, but Arizona had an answer each time.

USC scored the first six points of the first half to get within nine. Henderson followed with consecutive 3-pointers.

USC has the length to match up with Arizona, but not the heft. The beefier Wildcats scored 30 points in the paint and made it tough for the Trojans to get into any kind of offensive rhythm.

Arizona had good offensive flow with its new-look lineup in the first half and an answer every time USC tried to make a run. The Wildcats were solid at the defensive end all night to beat the Trojans for the 11th time the past 12 games in Tucson.

USC: At Arizona State on Saturday.