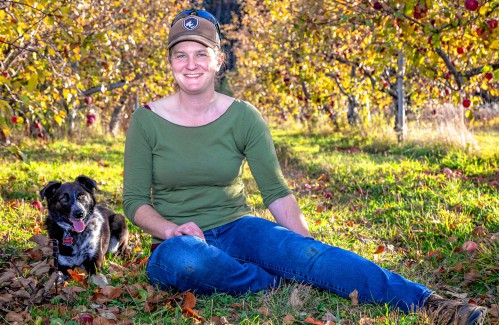 At Phoenix Fruit Farm in Belchertown, owner Elly Vaughan re-imagines how a medium-sized orchard like hers – one of hundreds in the hills of western Massachusetts – can sustain itself and contribute to a thriving local community.

The metaphor of a phoenix with its rebirth symbolism goes well with the history of this farm. But as the phoenix of myth rises from the ashes as a young version of its former self, Phoenix Fruit Farm becomes something new and different under Vaughan’s leadership. As the world changes around us, she sees how businesses like hers also have to adapt.

When Vaughan bought the farm in 2015, it was on nearly 50 acres of land with hundreds of mostly apple trees and a handful of buildings, many of which were well past their prime. “Most of the trees were falling and the orchard hadn’t been replanted much in 20 years,” she says.

“It used to be set up around a medium-sized wholesaler,” she says. But since more and more cheap apples were being grown elsewhere, “many orchards like this one either became larger and more mechanized or went under in the late 1990s”.

To breathe new life into the farm, Vaughan drew on her years of experience managing farms in the Valley and her new perspectives in farming around the world. The work in front of her: replacing aging trees with young cattle while rethinking what they grow and how to connect people to their food. When developing a new business model, two strategies have prevailed: diversification and direct customer loyalty.

Up in the hills off Sabin Street, the orchards of Phoenix Fruit Farm are being overtaken. Over half of the old apple trees, which once numbered over 4,000, have been removed. These are being replaced by a growing variety of new trees and vegetable crops.

When switching to direct sales, the majority of this premium finds its way to customers in the farm’s own shop, at local farmers’ markets or when customers come to pick apples and peaches themselves. Vaughan hopes to add self-picking strawberries, pumpkins and cut flowers soon to give customers more opportunities to visit them throughout the season.

She also hopes to make more value-added products. “Right now we have three articles; an apple butter, a peach habanero salsa and our signature Phoenix Breath Peach Hot Sauce, ”she explains. These products are a great outlet for imperfect products that are not sold as a whole.

Many of the changes Vaughan made turned out to be more complex than expected. The Phoenix Fruit Farm Country Store, built on Mill Valley Road in 2019, could get the cake.

“I built the store because I needed a point of sale for my apples, but now it’s almost a completely different unit,” says Vaughan with a laugh. As more products have been added to attract more visitors, it has become a comprehensive local grocery store that is now open all year round. They sell everything Phoenix Fruit Farm grows and manufactures, along with ready-made meals, housewares, and dozens of other local products – meat, dairy, eggs, produce, and more.

The store’s foray into convenience foods began with Vaughan’s fixation on making cider donuts. When it became clear that the equipment needed wasn’t going to warrant just making donuts, “I decided to do anything to make ready-made meals – sandwiches, muffins, side dishes, cold salads, pies, quiches, and all that stuff,” says Vaughan . “And it has grown into one of the largest sales categories in the business.”

As Vaughan establishes itself as a permanent year-round grocery store, Vaughan has recognized the role of the country store in providing access to groceries in this area. “We accept SNAP (the state’s Supplemental Nutrition Assistance Program) and HIP (the state’s Healthy Incentives Program, which offers instant discounts on SNAP benefits spent on local products),” she explains, “which is what people in these programs do gives the opportunity to access high-quality food and local products from all over the valley. “

In this way, Phoenix Fruit Farm supports the community and a strong local food economy. But Vaughan also thinks bigger and further into the future.

“Much of the work done to build and maintain local food systems is ignored by broader society,” she says. “It’s quiet work that is done every day by farmers and people who take it upon themselves to get involved.”

“Small farms that sell direct are one of the most efficient ways to get quality food into the community,” continues Vaughan, “and I think not enough is being done to compensate farmers for the work.”

Vaughan has received some support for the conversion of the store and orchard through competitive public grants. Some farmers look down on receiving subsidies, she says, but in her eyes: “It’s not about us, here and now. It’s about using all the tools we have to make sure we leave a farm that someone else can keep working when we’re gone. “

“In the long run, I think it’s a smart move by the state to invest in local farms this way. The things I used these grants for [building renovations, a new well, land rehabilitation, etc.], they are not just investments in my farm, but in this arable land for future generations of farmers. “

Phoenix Fruit Farm’s products and specialties are sold in their daily country store in Belchertown. They can also be found at Belchertown Farmers Market (open October 3, 10 am-2pm) and Farmers Market in Forest Park in Springfield (Tuesdays 12:30 pm-6pm through October).

Meanwhile, the orchard on Sabin Street is open for self-picking on Saturdays and Sundays from 10:00 a.m. to 5:00 p.m. through October 17th, except in bad weather (customers can call 413-213-1414 to see the orchard open to confirm). Cash, credit, and SNAP are accepted methods of payment.

Jacob Nelson is Xoordinator for Xocommunication for CISA (Community Involved in Sustaining Agriculture). To learn more about local farms and to choose your own options in your area, visit buylocalfood.org/find-it-locally.