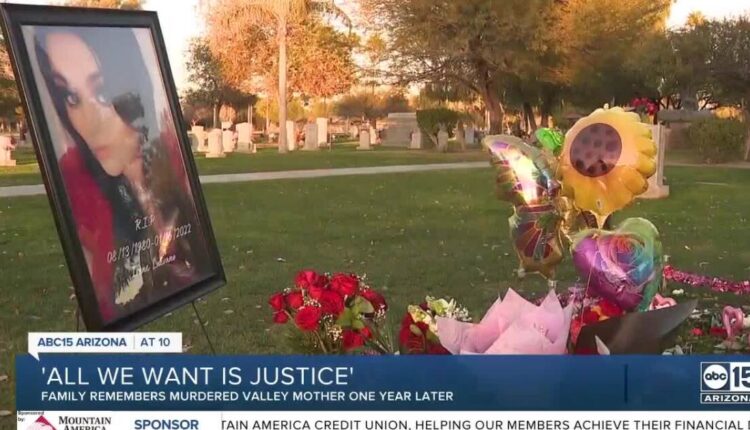 It’s been one year since a Phoenix mother was found dead in a remote part of La Paz County and her boyfriend arrested for murder.

“It hurts and I miss her so much… for my grandkids that were left behind, and my daughters that are suffering a lot for her,” says Arlene Luevano, Irene’s mother.

37-year-old Irene Luevano has been gone for a year but, the pain from what happened to her is still fresh.

“It’s all we want, is just justice for my daughter,” says Irene’s mother.

There were roses covering Irene’s resting spot on Wednesday, a show of everlasting love from her family.

“It’s hard for me to accept that my sister is no longer here with me. She was my everything,” says Victoria Luevano, Irene’s younger sister.

“Sometimes, I come and I sit right there next to her and I’m just like, I still can’t believe that my sister’s buried there… just because she got her life taken away,” says Sandra Mercado, Irene’s older sister.

The family last heard from Irene in the early morning hours of January 16, 2022.

She had made a terrifying call to them, saying she had been stabbed in the neck by her boyfriend.

ABC15 followed the family at that time in their search for Irene across the Valley. But, on the 5th day, police made the discovery of her body in a rural area of ​​La Paz County, it’s a place the family visits often.

“We put out solar nights for her, she has crossed her and we talk to her, you know, because we feel that she’s there with us,” says Sandra.

Irene’s boyfriend, George Lara, has been sitting behind bars since then. He’s accused of stabbing the mother and leaving her in the desert to die.

Irene leaves behind a tight-knit family. She has six children and two grandchildren. Irene’s mother knows she is in a better place and that is the one and the only thing that brings her peace.

Wondering when Flagstaff waste services will catch up after snow delays? Here’s the latest.