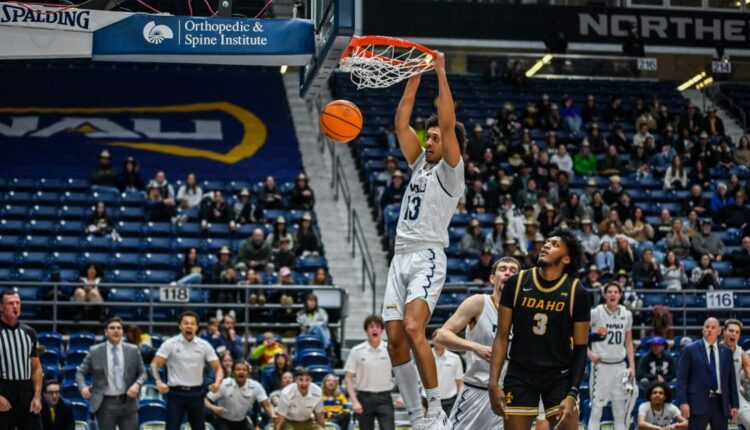 Idaho scored the most points of any opponent in the Lumberjacks’ last seven games, defeating Northern Arizona 88-83 in the Walkup Skydome. Northern Arizona dropped its fourth consecutive game, and the defeat moved its record to 5-15 (1-6 Big Sky).

The Vandals were the beneficiaries of efficient scoring outputs from forward Isaac Jobes and guard Diviant’e Moffitt, who scored 30 and 25 points, respectively. Northern Arizona guard Jalen Cone scored 22 in his return after missing a pair of games due to illness, but the Lumberjacks couldn’t keep up in the end of Idaho’s offensive output.

“Unfortunately, same story. The last four games we’ve gotten off to tough starts and I think it has a lot to do with our defense. We have to defend better,” Northern Arizona coach Shane Burcar said. “For them to shoot 60% in the first half — and we’re chasing. We scored the ball pretty good in both halves — and to give up 47 points in the first half and chasing the whole time, you’re not going to have success doing that consistently.”

Northern Arizona put together a decent offensive night, with 83 points marking the most of the Lumberjacks have scored against a Division 1 opponent this season in a game that didn’t go to overtime. Northern Arizona’s only better performance against a DI foe came in a 106-101 overtime loss to Southern Utah on Dec. 17

Along with Cone’s 22, Northern Arizona got 12 points from Xavier Fuller and 11 from both Carson Towt and Trent McLaughlin. Most of that scoring effort came in the second half, as the Lumberjacks battled back from a 15-point deficit late in the first half. However, the vandals scored from all over the floor. They finished the contest with a shooting percentage of 56.6%.

After trailing 47-46 at halftime, the Lumberjacks steadily creeped back into the game. The trimmed the lead slightly over the first 10 minutes of the second half. Keith Haymon scored eight points, including a pair of 3-pointers, within the span of a few minutes of play. Finally, with 7:13 left to play, the Lumberjacks stole the ball and Cone passed out to Fuller in transition. Fuller dunk the ball and gave the Lumberjacks a one-point lead, their first of the contest.

The advantage changed several times from there in the final few minutes. After a few lead changes, Idaho’s Jones hit a layup and drew a foul. His ensuing free throw put the Vandals up a point, and they held on by hitting a few key free throws in the final seconds to pull away.

“I definitely felt like we had the momentum going our way,” Cone said. “Keith hit some big 3s, and we had some steals — (Xavier) with the fastbreak dunk — and I thought we had some good momentum going. At the end of the game we have to keep that going.”

While ultimately encouraged by the team’s offense, Burcar said some of the hot shooting was necessary just to keep up with the Vandals. He said, moving forward, that the players simply need to execute the defensive game plan better.

“As a coach you try to encourage and be positive, but it comes to a point in time where the job has to get done by the young men,” Burcar said.

The Lumberjacks will host Eastern Washington Saturday at the Walkup Skydome.

Northern Arizona’s Nik Mains secured an offensive rebound and hit a layup in the second half that would have been just a routine play at any other point of his career. However, the basket pushed him over 1,000 points in his Lumberjacks career. Mains became just the 31st men’s player in Northern Arizona history to reach that mark.

“When you start talking about our program, I think you have to start with Nik Mains,” Burcar said.

He added: “When you look back at his career, there’s going to be something to be said about it. As we move the program forward, Nik’s a big part of our success and our future success.”