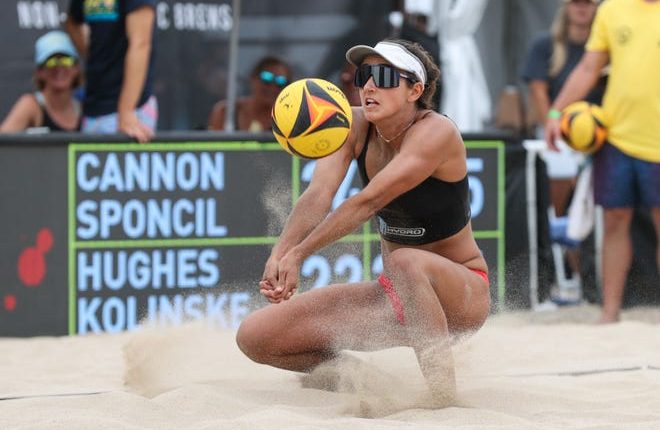 People love stories about pro athletes winning a championship in their hometown.

Sarah Sponcil, a Phoenix native and Veritas Preparatory Academy alum, will look to continue her successful pro beach volleyball season during her homecoming this weekend when she competes in the inaugural season-ending men’s and women’s AVP Phoenix Championships at the Footprint Center.

This will be the first AVP Tour event in the Valley since 2009, which she attended as a child.

“I’m just so excited to go back to Phoenix, just to go back and see everyone that I’ve ever played volleyball with. I think a lot of people are going to show up and support,” Sponcil said.

“That’s where it all started for me. There’s a lot of memories back home and just to see the people that helped me get to where I am today is just a special moment, a fairy tale ending or cherry on top to win the whole thing.”

Sponcil and Cannon, both 26, have been successful through seven AVP Pro Beach Volleyball Tour tournaments this season. That includes their win at the Hermosa Beach Open in July and high placements in the AVP Gold Series events in Atlanta for second-place in August, and two third-place finishes, in Manhattan Beach in August and Chicago earlier this month.

Part of her success this season is attributed to an alternative form of training away from the sand by wearing cleats during her workouts at Exos in Phoenix during the winter off-season. Exos is a facility where many pro athletes, including NFL players train.

It’s natural to believe most pro beach volleyball players enjoy wearing sandals. But Sponcil doesn’t like them, which is ironic for someone who makes a living competing in the sand.

That’s partially because Sponcil played soccer before she became a beach volleyball champion at the high school and college levels and competed in the 2020 Tokyo Olympics.

Sponcil said training in cleats for three months on grass and AstroTruf improved her speed.

“I think it really helps me with just speed work and just directional movement,” Sponcil said about training in cleats at Exos. “It was kind of interesting because I’ve never really worked on how to run properly and how to explode a certain way. …

“It’s just kind of crazy the technology that goes into each individual how their body moves and how they’re getting stronger.”

From indoor courts to the sand

There aren’t many pro beach volleyball players who were raised in the desert. Sponcil began playing indoor volleyball when she was six and picked up beach volleyball as an eight-year-old at Victory Lanes Sports Park complex in Glendale.

She joined a beach volleyball club soon after and developed her talent so quickly as she won many matches as she competed in older age-group divisions.

As an eighth grader, Sponcil and her father began commuting to southern California to compete in its larger, competitive beach volleyball scene.

That helped her become one of Arizona’s most decorated high school volleyball players ever.

She was a four-year indoor volleyball varsity player who earned All-American in each of her final three years at Veritas in Phoenix. She led the Falcons to three consecutive state titles in 2010 though 2012, a runner-up finish in 2013, was selected as the Small School Player of the Year between her sophomore through senior seasons. She also was named Gatorade Arizona Player of the Year twice during her final two years.

Sponcil moved to Los Angeles for college, where her accolades continued.

After she played her first three years on Loyola Marymount’s indoor volleyball team, and earned the 2016 West Coast Conference Defensive Player of the Year. Sponcil transferred to UCLA for her final year of indoor eligibility in 2017, and then switched to beach volleyball, winning two straight national championships in 2018 and 2019 when she was in graduate school. Those are the only two women’s beach volleyball titles in school history, and she earned First Team All-Conference honors at UCLA.

In 2018, she partnered with Kelly Cheng (neé Claes) from UCLA’s crosstown Pac-12 rival USC and entered the AVP Tour when they were both fifth-year seniors. They won two consecutive FIVB World Tour titles in 2021 and qualified for the Tokyo Summer Olympics.

Sponcil and Cheng eventually ended their partnership, and Sponcil reunited with Cannon earlier this year.

Sponcil said that ‘it felt back to normal and just clicked” when she partnered with Cannon once more. Their goal is to play in the 2024 Paris Olympics after winning a title in Phoenix.

“We’re great friends off the court as well and I think that’s extremely important in a partnership. The biggest thing is I want to see her succeed as she wants to see me succeed,” Sponcil said about Cannon.

“There’s a lot of trust and a lot of love, and I think when that’s in place the wins are great, the losses are less painful when you just love the person so much and want what’s best for her and for the team in general. ”