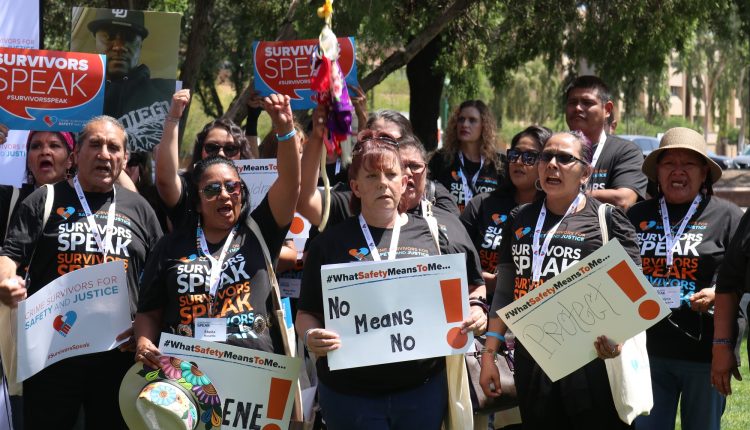 Dozens of victim advocates bowed their heads in the late Monday morning heat, remembering the friends and family members lost to violent crime; some murmured names aloud, others were overcome with grief. They stood just outside the State Capitol, welcoming the start of National Crime Victims’ Rights Week by calling on legislators to better support victims across the state.

Gaxiola lost her 14-year-old daughter to gun violence, and since then has been involved in advocacy work. She said her daughter’s killer was a victim of trauma and insufficient resources — both of which can be remedied by targeted legislative action that helps break the cycle of victimization, she said.

Alliance for Safety and Justice, a criminal justice reform organization of which Crime Survivors for Safety and Justice is a part of, drafted House Bill 2594, which is currently awaiting debate by the full Senate. It establishes a fund for trauma recovery centers that don’t yet exist in Arizona but in other states provide services like mental health care and legal assistance to crime victims and their families. The bill’s sponsor, GOP Rep. Ben Toma, said that defining centers in state statute lays the groundwork for their future operation.

“You cannot have safety in every community without first addressing the trauma and grief that has touched so many of your lives,” the Peoria Republican said to the group of victim advocates and crime survivors gathered around him on Monday.

Sen. Sine Kerr, R-Liberty, lobbied for revisions to the victim compensation fund. It provides victims financial assistance when their mental health, economic circumstances or physical health have been directly impacted by a crime. Currently, the fund depends on criminal and court fees, which Kerr said are too unstable and inconsistent. Her House Bill 2132 seeks to solve this problem by appropriating a one-time funding allocation of $10 million dollars and setting aside $2 million in future grants from the state general fund. It, too, is pending approval from the Senate.

“We need consistent, stable, reliable funding that ensures victims get the help they need when they need it,” Kerr said.

John Bauters, the Arizona state director for the Alliance for Safety and Justice, pointed out that looming insolvency isn’t the only thing his organization hopes to rectify in the victim compensation fund. The organization worked with the Arizona Criminal Justice Commission to draft the bill increasing its funding.

The catch, Bauters said, is eligibility: Victims must file a police report within 72 hours of a crime to access the fund and make their claims within 2 years. Those time frames are difficult for victims reeling from trauma to meet, he said, and they often put off reporting in favor of trying to continue their lives as usual.

One recent victory celebrated at the inaugural event was the passage of House Bill 2604, signed into law by Gov. Doug Ducey last Friday. The measure extends the length of orders of protection from one year to two. For Celina Jyoti, who escaped domestic violence with her children, this was a particular triumph.

“My children and I are still on the road to recovery after years of physical and mental abuse from my ex-husband, “she said in an emailed statement from Crime Survivors for Safety and Justice. “Arizona lawmakers must continue to support communities most harmed by violence by making sure that we have access to trauma recovery services and the resources that we need to heal.”

The main goals of the Alliance for Safety and Justice, Bauters said, are to move the conversation about the criminal justice system from punitive to healing action, and to connect policymakers with the realities that so many Arizonans face. In the end, legislation that improves outcomes for crime survivors is imperative and necessary.

“Being a supporter of a crime survivor is a non-partisan issue,” he said.