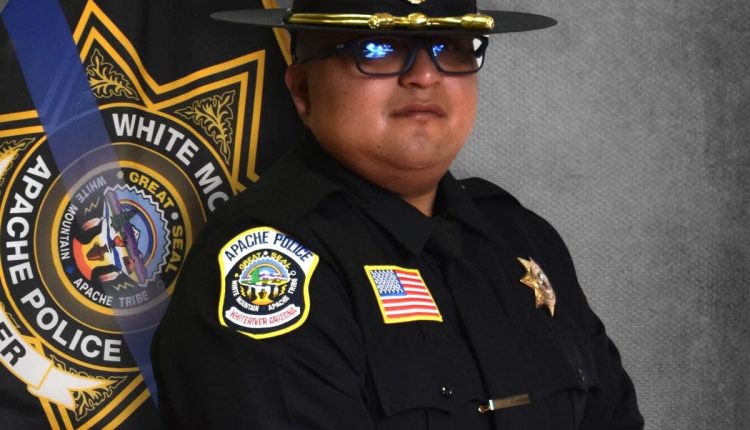 Vigil for fallen police officer to be held in Whiteriver

A candlelight vigil will be held Monday night for Adrian Lopez Sr., a White Mountain Apache Police officer who was shot and killed during a traffic stop on tribal land Thursday evening.

The shooting marked the state’s first line of duty death so far this year.

During a “gun battle” with the suspect after the traffic stop, another White Mountain Apache police officer was injured and remained hospitalized in the Phoenix area with injuries that were non-life-threatening as of Friday afternoon, according to officials. He was identified as 29-year-old Lonnie Thompson.

The suspect, identified as 25-year-old Kevin Dwight Nashio, was killed during the shootout, officials said.

The Federal Bureau of Investigation is investigating the shooting. Tribal officials are working with Navajo County Sheriff’s Office to provide updates to the public about the shooting.

The candlelight vigil will be held on Monday, June 6 at 6 pm in front of the White Mountain Apache Police Department building in Whiteriver.

A large photo of Lopez in his police uniform was featured throughout a news conference on Friday at the Hon-Dah Resort and Casino in Pinetop.

He had only begun working for the White Mountain Apache Police Department in January, according to Navajo County Sheriff’s Office Chief Deputy Brian Swanty. Previously, Lopez worked for the Bureau of Indian Affairs from March 2021 to December 2021.

A Jan. 18 Facebook post from the Police Department said he was “a lateral transfer” from the Wind River Reservation in Crowheart, Wyoming.

Lopez was shot and killed by Nashio during the altercation, Swanty said. Whether Nashio used his own weapon or Lopez’s weapon was still being investigated, according to Swanty.

Nashio then stole Lopez’s vehicle and led other White Mountain Apache police officers on an approximately 40-mile chase through “very rugged and rural areas” of the Fort Apache Indian Reservation, Swanty said. There was “a rolling gun battle” between Nashio and the officers during the chase, Swanty said.

He leaves behind a wife and child, according to Swanty.

This article originally appeared on Arizona Republic: Vigil for Officer Adrian Lopez Sr. to be held in Whiteriver