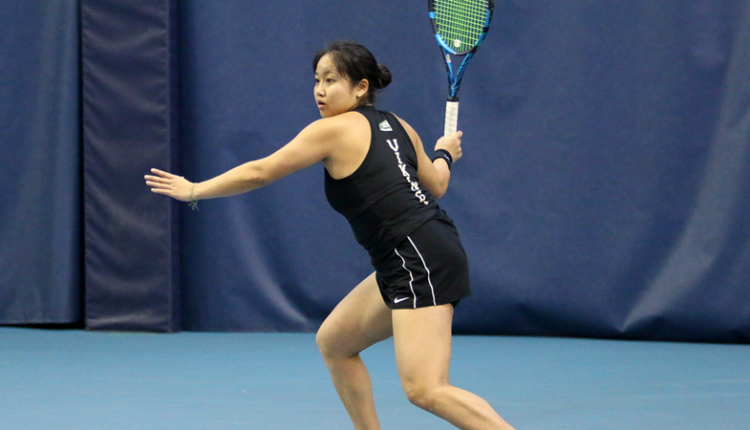 FLAGSTAFF, Ariz. – Despite a pair of singles wins, the Portland State women’s tennis team dropped its regular-season finale, 5-2, to Northern Arizona on Saturday.

The Vikings finished the regular season 8-11 overall and 3-5 in conference play. The Lumberjacks improved to 9-7 overall and 7-1 in Big Sky action.

“This has been a heck of a regular season,” head coach Kyle Russell said. “There were so many ups and downs but the one constant was how this team stuck together and kept working.”

Having two of the best doubles teams in the conference, the Vikings challenged the NAU lineup. The Lumberjacks clinched the opening point with a 6-4 win at No. 3 and a 7-5 victory at flight two. Tied at 6-6, Nika Beukers and Capu Sanoner’s match went unfinished at the No. 1 position.

“Capu took the court at about 50% and almost got us the doubles point today. It was very tough on her to have to stop her singles match,” Russell said. “I was really impressed with Mako and Emily for winning the last two matches so we could walk away on a good note.”

The Vikings will await the results of several conference matches over the next week to find out where they land in the final Big Sky standings. The top six teams will advance to the Big Sky Championship Tournament. The event will be held in Phoenix, Ariz., from April 28-30.