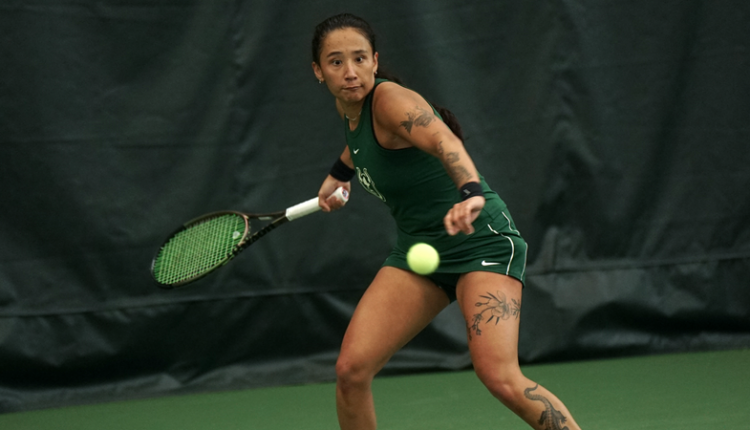 The Vikings enter the dual with an 8-10 overall record and a 3-4 mark in Big Sky play. The Lumberjacks are 8-7 overall and 6-1 in conference play.

PSU achieved a crucial conference victory on Sunday, April 10, over Eastern Washington to keep their postseason hopes alive. They are currently ranked fourth in the Big Sky standings at 3-4. As several duals around the conference remain on the schedule, the Vikings will need to finish in the top six of the standings to qualify for the Big Sky Championship Tournament. The event will be held in Phoenix, Ariz., from April 28-30.

On Sunday, Capu Sanoner, Nika Beukers, Makoto Ohara and Emily Rees all won singles matches as the Vikings rolled to a 5-2 victory over EWU.

In addition to earning two Big Sky Women’s Player of the Week honors this season, Sanoner arrives in Arizona riding a three-match win streak in singles after topping a trio of conference opponents in their last three matches.

With 35 wins, the Vikings have two of the top three doubles teams in the conference at Sanoner/Beukers and Rees/Hernandez Coronado. Sanoner and Beukers lead the Big Sky at No. 1 doubles with an 11-2 record on the year and are undefeated against conference foes. Hernandez Coronado and Rees own a 12-2 overall record, ranking first in the Big Sky at the two spot, with eight wins.

Sanoner has won 25 No. 1 doubles matches in her career, one win shy of tying the program’s record for individual wins at No. 1 doubles. Also on the cusp of history is her partner, Beukers. A win on Saturday would mark Beukers’ 16th of the season, making her the program’s single-season record holder for overall doubles wins. Currently, she sits tied for the lead with 15.

The back-to-back Big Sky Champion Lumberjacks are 8-7 this season and 6-1 in Big Sky competition. The only conference loss came against Weber State 3-4 on Feb. 25. A win away from the Wildcats, NAU sits second in the standings going into the weekend. Sophomore Gina Dittmann leads the Big Sky in singles wins with 12.

Portland State has recorded just one win over NAU in program history as they trail the all-time series 1-21. A Viking’s win over NAU on Saturday would be their first since 2014. Their most recent meeting was the semifinals of the 2021 Big Sky Championship Tournament, in which the Lumberjacks came out on top (4-0).