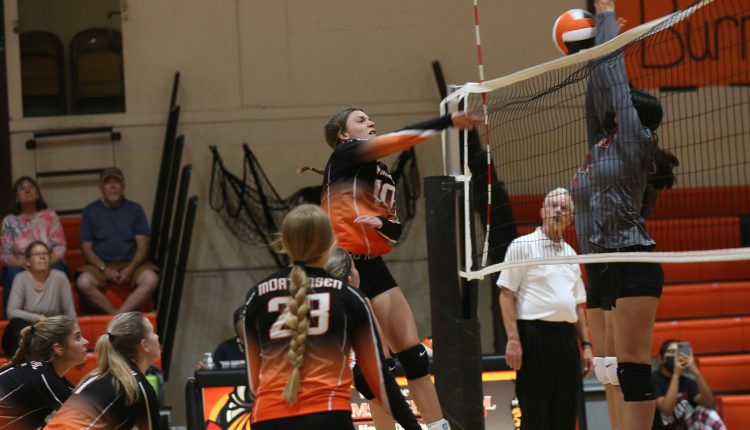 WILLIAMS, Ariz. — Last week was a busy one for Vikings volleyball Coach Connie Stevens’ squad. The team played nine matches, including six at a tournament in Flagstaff Sept. 9-10.

“We were the only 1A school at the tournament,” Stevens said. “We placed fourth in the gold bracket, against 3A and 4A schools.”

The Vikings fist faced Coconino High School Saturday. In a hard fought contest, Williams came out on top with scores of 26-24 and 26-25, in a timed match.

In their final match of the day, the Vikings fell to the eventual tournament winner, Estrella, 14-25 and 19-25.

“Estrella was amazing,” Stevens said. “One of a larger school’s advantage is that they have a deeper bench. We only had seven players, and some of them have 13 or 14.”

The final match of the tournament was against Flagstaff in a single game to 30. The Vikings lost 15-30, which earned them a fourth place tournament finish.

In other action, the Vikings traveled to Grand Canyon, where both varsity and junior varsity played a double header. In the opening junior varsity match, the squad defeated the Phantoms 25-18 and 25-20. The varsity also won its opener, 25-7, 25-8 and 25-16.

The top server for varsity was Rory Stevens with 11 points, followed by Kai Mortensen with 10. Shaelee Echeverria had 22 kills and eight blocks, and Mortensen tallied five kills.

“She’s rocking,” Stevens said of Echeverria. “As of last week, she was leading the state in blocks and kills.”

Both Williams teams came out on top against St. Michael Sept. 8.

“The scores weren’t indicative of the quality of the match,” Stevens said. “St. Michael was scrappy, and played good volleyball. Again, Echeverria had an impressive 17 kills and seven blocks. Mortensen also tallied eight kills, Riley McNelly had six blocks and Stevens had 28 assists.

Newborns Get Routine Heel Blood Tests, but Should States Keep Those Samples?