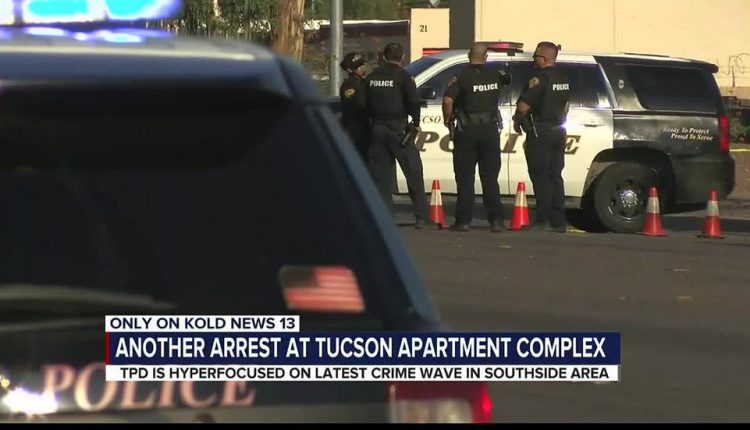 TUCSON, Ariz. (KOLD News 13) – For the third time in less than a month, Tucson police were called to the Westlake Village Apartments on Ajo Way.

36-year-old Jerome Encinas is now sitting in jail after an hours-long standoff.

He’s no stranger to police with an extensive criminal past in Santa Cruz and Pima counties.

Our search of court records shows he’s a felon with an outstanding warrant and a prohibited possessor.

Encinas pleaded guilty to aggravated assault with a weapon, in a case dating back to 2015.

And now he’s sitting in jail on a charge of attempted murder.

Officers headed to Westlake Village Apartments looking for him as a suspect in a recent shooting about 4 miles away.

Tucson police say Encinas barricaded himself inside an apartment as officers moved in.

We wanted to know why there have been multiple killings at that apartment complex.

At least two people, a man and a woman, had been killed in less than a month.

Crime has spiked in the entire area.

“We have seen a rise in calls for service and high profile incidents that have happened such as a homicide on Ajo Way and Holiday Isle,” Magos said.

So now TPD’s Southside Division is hyper-focused on this latest crime wave in that area.

“This basically takes patrol officers and takes them into that area, not just in their vehicles but also on foot to get out and interact and really open that line of communication with the community members to really hear them out and really see the quality of life issues they’re seeing,” Magos said.

He says it really is a community effort and not something TPD can take on itself.

“So we are working with other city departments such as code enforcement and identify other additional city community resources that can help out,” he said.

When asked why TPD wouldn’t go in an shut down the apartment complex, he replied, “We’d have to take into account this is a neighborhood, these are community members, it’s not that easy.”

He says TPD is working with the apartment complex.

KOLD reached out to them as well to see what’s being done to keep tenants safe, but haven’t received a response.

Tucson Police is urging people to call 88-CRIME if they see any suspicious activity in the area.