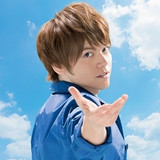 Voice actor Yuma Uchida (Megumi Fushiguro in JUJUTSU KAISEN) announced that his first solo concert at Nippon Budokan, titled “YUMA UCHIDA LIVE 2022 ‘Gratz! / your world, our world’ @ Nippon Budokan -2DAYS-,” will be held on November 12 and 13, 2022. The news was revealed at his fan club event “Beside YU ‘1st’ Fanclub Event ~Nice to meet YU~” held at Nakano Sun Plaza in Tokyo on May 29.

While working as a popular anime voice actor, Uchida made his solo singer debut in May 2018 and has released nine singles, two original albums, and two live Blu-rays. Nippon Budokan, the internationally famous sport arena has been used by many well-known artists, such as The Beatles, Bob Dylan, Cheap Trick, Deep Purple, Queen, and The Rolling Stones. It will be the largest venue for him in his solo singing career. His fan club members can make advance reservations for tickets until on June 30.

He says on Twitter, “To be able to stand in Budokan, a dream place for an artist…! I’m really happy. Let’s make the happiest day of the year together! I’m waiting for you!”

A special movie that was screened at the fan club event, celebrating the fourth anniversary of his solo singer career, is also available on YouTube.

Phoenix Mercury to take on the Chicago Sky Tuesday