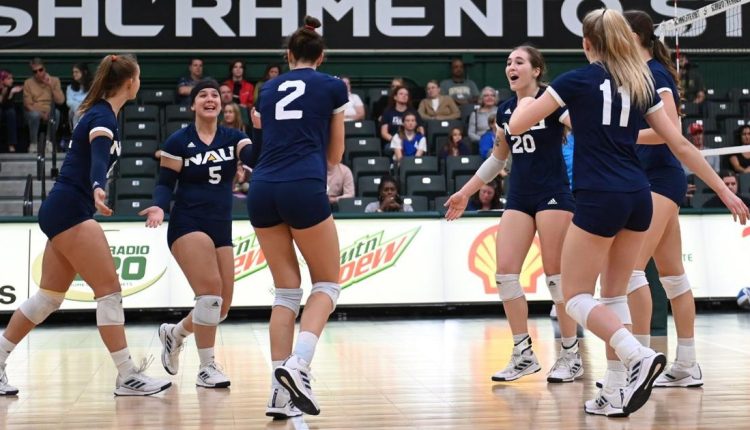 For the final time during the 2022 season, the Northern Arizona volleyball team will play in the Rolle Activity Center in a pair of matches against Weber State and Idaho State.

The Lumberjacks host the Weber State Wildcats for a Thursday match before facing off against the Bengals for the first time this season on Saturday. The Lumberjacks will honor seniors Kate Hatch and Jasmine West prior to their final home matches.

Northern Arizona, currently sitting at 3-16 overall with a 2-10 mark in the Big Sky Conference standings, looks to snap a four-match losing skid and is coming off a 3-0 road loss Saturday to Northern Colorado

Weber State currently sits in second place in the conference standings with a 9-3 record (15-8 overall). Idaho State is on a hot streak, having won three straight with a 5-7 mark in Big Sky action and 13-12 overall.

The Lumberjacks and the Wildcats have faced off once this season in Ogden, Utah, on Sept. 24, as Northern Arizona lost 3-1. Kacee Moore paced the Lumberjacks with 11 kills, and Millie O’Ketter (27) and Kate Hatch (16) posted double-digit digs. Jordan Cherniss served up four aces, and Jordan Elder hit .500 (7-1-12) in the match.

The Bengals as of press time are coming off wins over Weber State, Eastern Washington and Idaho. The team sits at the bottom of the conference with a .180 hitting percentage and average 11.67 kills per set, and it will go up against one of the more tougher defenses in the Big Sky. Emrie Satuala ranks fourth in the Big Sky with a clip of .330 and second with 1.17 blocks per set, while Sadie Bluth leads the team in kills per set with 3.04.

Following the final home stretch, Northern Arizona will play on the road one last time during the regular season. The Lumberjacks look to avenge a 3-1 loss earlier in the season to Idaho on Nov. 17. The final regular-season contest comes on Nov. 19 at Eastern Washington. The Lumberjacks beat the Eagles in five sets on Oct. 20 at home.

For the second week of competition in a row, Northern Arizona received Western Athletic Conference Diver of the Week accolades courtesy of Grace Wesche putting on a show in New Mexico.

Wesche started the weekend off with a second-place finish on the 1-meter board, closing out the event with a score of 262.95. The true freshman then placed third in the 3m with a final score of 277.35.

Northern Arizona will host the Lumberjack Diving Invite next week in Flagstaff on Thursday.