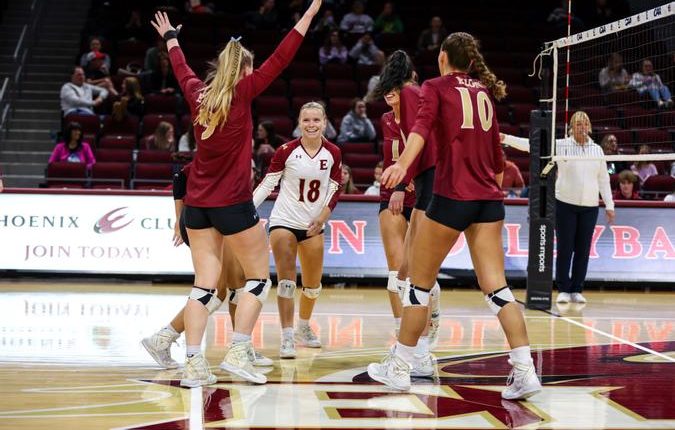 HAMPTON, Va. – The Elon University volleyball team delivered its most efficient offensive performance of the year on Sunday, as the Phoenix defeated Hampton 3-0 to extend its winning streak to three matches.

Elon finished the match with a season-best hitting percentage of .317, as the Phoenix offense had 41 kills and just nine errors. This was the first time Elon hit better than .300 in a match since the team registered a .446 hitting percentage on Nov. 6, 2021, against Hofstra.

“We played a very low error match today, but we were still very aggressive in both serving and attacking,” head coach Mary Tendler said. “It allowed us to stay in rhythm early and sustain that throughout the match. Both Leah and Clara did a great job of mixing up their shots and taking some big swings. We’ll look to keep this momentum going on the road next weekend. ”

With the victory, Elon clinched a spot in the Colonial Athletic Association Tournament, which Towson will host on Nov. 17-19. The win also improves Elon’s record to 7-5 in CAA matches and 10-12 overall. The drops defeat Hampton to 3-14 overall and 0-14 in the CAA.

The Phoenix travels east to Wilmington for its two road matches of the season against UNCW. Saturday’s contest is set to begin at 4 pm while Sunday’s match will start at 2 pm

Here’s What We Love About The Hyundai Tucson N Line