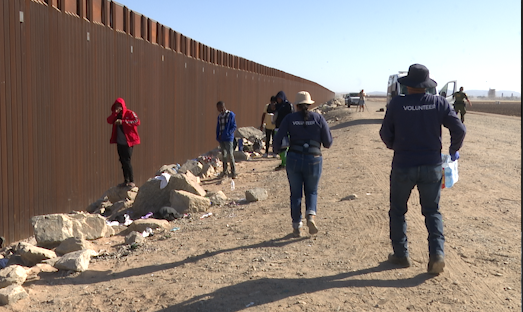 YUMA, Arizona (Border Report) — Nathalie Hernandez can be heard saying, “Bienvenidos,” as she offers water, bananas, apples, oranges and even pastries to migrants who come across what’s known as the “Yuma Gap,” an opening in the border barrier that allows fairly easy access into the US

Hernandez says she comes out almost every day to help the migrants.

On this day, she brought out her father and cousin to help her pass out the water and snacks.

“I try to normalize it as much as I can, I welcome them into a new space,” said Hernandez. “We want to make sure they have their most immediate needs water and food.”

Many more asylum seekers are border bound whether Title 42 is in place or not, migrant says

Hernandez told Border Report she and fellow volunteers also bring other items to keep the migrants warm and dry.

“Sometimes, we bring blankets for warmth; it can get really cold here,” she said. “We bring clean socks because sometimes they cross the dam and their shoes and socks get wet, so we just try to make sure we have everything they need that I would provide to a neighbor,”

Nathalie Hernandez is a volunteer with the California-Arizona Humanitarian Coalition. (Salvador Rivera/Border Report)

Hernandez has been volunteering in this area for about a year, the last five months with a group called the California-Arizona Humanitarian Coalition.

“I always felt I needed to do my part being able to provide care for folks that are in need,” she said “For me, it’s just a reward being able to help folks, everyone should take a day to come out here.”

Hernandez and the other volunteers also spend part of their day cleaning the area picking up trash and debris such as banana peels and plastic bottles.

“We want to make sure they have a clean place to come to. We don’t want them to pick up bacteria from previous people that have crossed …,” she said. “We also look at (the) environmental impact of it all, we want to keep this land as pristine as possible.”

Title 42 has no bearing on decision to cross border, Venezuelan asylum-seeker says

Some have predicted an influx of migrants had Title 42 been allowed to wind down.

President Joe Biden announced the order would go away on May 23.

But more than 20 states — Texas, Arizona and Missouri among them — filed a lawsuit to keep Title 42 in place saying they were not prepared to handle large numbers of migrants coming north of the border and settling in their communities. 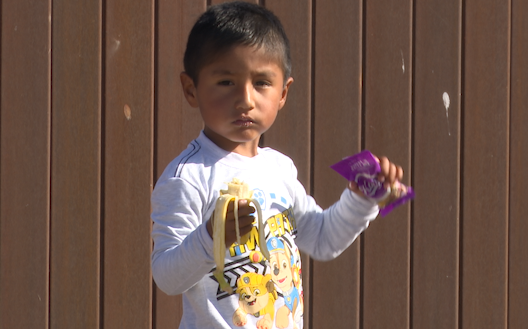 Little boy received a bag of trail mix and a banana from volunteer Nathalie Hernandez with the California-Arizona Humanitarian Coalition. (Salvador Rivera/Border Report)

A judge in Louisiana on Friday issued a preliminary injunction, likely keeping the policy in place as it makes its way through the courts.

Should Title 42 lapse, some believe an even larger number of migrants will make their way north of the border.

For the month of April, US Customs and Border Protection reported a 4 percent drop in apprehensions in the Yuma Sector when compared to March.

Title 42: What you need to know

However, CBP agents are reporting a rise in encounters this month, with up to 1,500 per day.

Hernandez doesn’t agree with the figures.

“Those are their numbers, just from what I’m seeing in the need for food and water, it’s about 200 to 700 a day using supplies that we bring,” she said.

No matter if and when Title 42 goes away, Hernandez says she’ll be here to welcome migrants.

“We’re just ready for anything, if there are a lot of folks that are going to be coming through, we’re ready for it,” said Hernandez.