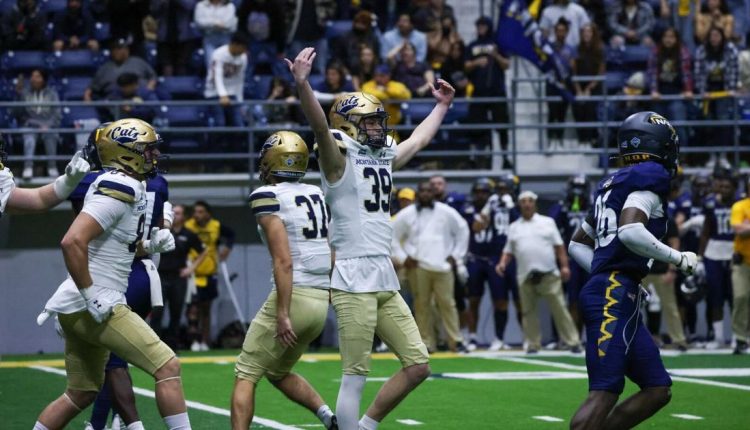 FLAGSTAFF, Ariz. — A football game that looked like it could end in disaster was saved by a couple of young Montanans.

With less than a minute left in Montana State’s barn burner at Northern Arizona, MSU’s Tommy Mellott scrambled right and fired a perfect pass to Taco Dowler. The 64-yard toss from the Butte native to the Billings West graduate transported MSU from a third down and 10 at its own 18-yard line to a first down at NAU’s 18.

Four plays after that game-changing pass, Blake Glessner made a 24-yard field goal as time expired. The No. 3-ranked Bobcats (8-1, 6-0 Big Sky) overcame a career day from NAU’s RJ Martinez and escaped the Walkup Skydome with a 41-38 win over the Lumberjacks (3-6, 2-4).

“We got away with a win here,” said MSU head coach Brent Vigen, adding, “Plenty of things that I know we’ll look at on film and probably cringe at, but ultimately, you win by three or win by 30, it’s the same result. So we’ll take the win, get on the plane and go home.”

Blake Glessner wins this thriller at the buzzer with this 24-yard field goal. #MTscores pic.twitter.com/FUmDwBWTFS

The Cats capitalized with a four-play drive that ended in a touchdown on a 3-yard pass from Tommy Mellott to fullback RJ Fitzgerald.

Another Martinez lost fumble, this time forced on a sack by Callahan O’Reilly, resulted in a 30-yard field goal from Glessner and a 17-0 MSU lead.

NAU began its comeback with 34-yard TD on a screen pass from Martinez to Coleman Owen with 1:12 left in the first.

Grebe sacked Martinez for the second time, and this one forced a turnover on downs. But MSU went three and out on the following drive, with Mellott missing a long pass on third down.

Incomplete deep balls down the sideline became a theme for MSU’s offense the rest of the first half. The ball sailed a little more than Mellott was accustomed to, perhaps due to Flagstaff’s 7,000-foot elevation or him “just getting pumped up,” he said.

“We’ve got to make those plays. That’s part of our offense,” Vigen said. “Typically, we’ve made more than we haven’t, and that wasn’t the case today.”

NAU took advantage of another poor MSU drive and cut the deficit to 17-14 on a 48-yard pass from Martinez to Hendrix Johnson with 4:55 left in the first half.

The Lumberjacks went ahead on a play that started with Martinez tossing left to Xander Warner, who then threw it right back to where it came. Martinez’s 7-yard receiving TD put NAU up 21-17 with 30 seconds left in the half.

MSU looked like it might regain control to start the first half, when it retook the lead on a 7-yard Mellott TD run and forced a three-and-out on the ensuing drive.

NAU then forced a punt and scored on a 5-yard Martinez rushing TD on third down with 3:15 left in the third quarter to complete the TD trifecta (passing, receiving and rushing).

NAU drove into MSU territory again but didn’t execute any big plays and needed a couple fourth-down conversions to stay alive. The 15-play, 47-yard drive ended with a 46-yard field goal from Collin Robbins with 1:05 left to tie it up at 38-38.

Before the heroics from Mellott and Dowler, overtime looked like MSU’s best-case scenario. The Cats lined up on third down with the 48 static seconds on the clock. An incompletion could’ve resulted in a punt to a team that had two timeouts and a passing offense that had its way all day.

“I’m sure everybody thought that it probably was going to be over; ‘Let’s just set up for overtime,’” said MSU safety Jeffrey Manning Jr. “Then our offense just went out there and won the game for us.”

Montana State safety Jeffrey Manning Jr. talks to reporters after the Bobcats’ 41-38 win over Northern Arizona on Saturday, Nov. 5, 2022 at the Walkup Skydome in Flagstaff, Ariz.

Mellott rolled right and held onto the ball until he was a step from the sideline and two defenders were feet away. The sophomore has made some good, clutch throws in his 11 college starts, but it’s hard to think of a better one than the 64-yard strike to Dowler.

“I saw it cleanly,” Mellott said, adding, “It was a good throw, didn’t overthrow him on that one, and he made a play for me. It was exciting.”

Montana State quarterback Tommy Mellott talks to reporters after the Bobcats’ 41-38 win over Northern Arizona on Saturday, Nov. 5, 2022 at the Walkup Skydome in Flagstaff, Ariz.

Dowler nearly outran the last defender, but Morgan Vest caught the true freshman with 37 seconds on the clock.

“(Mellott) threw a perfect ball to me, and it just landed in my hands,” Dowler told MSU Athletics, adding, “It was flickering in and out of the lights up there. Once I got it, I just tried to run. Didn’t run fast enough, but I tried.”

The TD-saving tackle from Morgan Vest ended up benefitting the Cats. They would’ve liked to score on the subsequent runs from Elijah Elliott and Mellott, but they were able to set up an “easy” 24-yard kick, as Glessner described it, with two seconds left. The sophomore calmly drilled the walk-off after NAU tried to ice him with two timeouts.

“Them icing me made me a lot more comfortable out there, for sure,” Glessner said. “It kind of let me get my swing in and go through my routines.”

Montana State kicker Blake Glessner talks to reporters after the Bobcats’ 41-38 win over Northern Arizona on Saturday, Nov. 5, 2022 at the Walkup Skydome in Flagstaff, Ariz.

Mellott completed 13 of 29 passes for 179 yards and a TD while rushing for a game-high 119 yards and three scores on 19 carries. Elliott added 92 yards on 16 attempts, Garrett Coon had 58 on 10 tries and Willie Patterson caught three passes for 41 yards.

Martinez finished with 452 passing yards, the most MSU has allowed since Eastern Washington’s Gage Gubrud threw for 520 in a 41-17 win at Bobcat Stadium in Oct. 22, 2016. Cooper Kupp was Gubrud’s top target that day, and Owen did a good impression of the now-NFL star with 196 yards on 10 receptions Saturday.

“We got after (Martinez) pressure-wise at times. Ultimately, we didn’t hold up real well in man-to-man,” Vigen said. “We knew he was good at putting the ball where it would need to be put, and (he did) a good job of getting the ball in the zones and playing with house money, I guess.”

Surrendering a 17-point lead and 452 yards might stick with the Cats as much as the win. But like they did in their 43-38 win over Weber State on Oct. 22, they lived by their “won’t be beat” mantra.

“It’s one thing to say, ‘Won’t be beat.’ It’s another thing to go out there and display it,” Manning said. “This was one of those games where we had to show that we won’t be beat by any means necessary.”