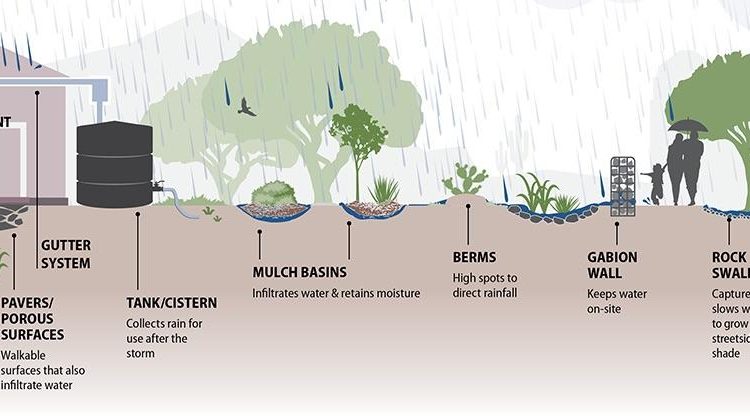 So water harvesting seemed like a good idea in 2010.

It could still be the case, but a revision to Tucson’s commercial water use ordinance is up for review during Tuesday’s city council study session.

Enforcement and compliance with the law has apparently become a mess.

Water use is a way for properties to capture rainfall and convert it to irrigation. Municipal staff ensure compliance with the commercial requirements during the construction phase, after complaints and through follow-up checks with counters.

But it turned out that random inspections showed that nine out of 12 projects deviated significantly from their grading schedules after the projects were completed, and 40 percent failed to meet specifications even during construction. That may be because the current approval process is particularly difficult to track across multiple plans.

Very few commercial properties use Tucson water meters, but they are allowed to use residential meters, which the city does not track.

Also, the required annual reports demonstrating compliance with the regulation are simply not produced – only five reports were produced by owners in 2021.

As such, city officials will ask the City Council to bring back commercial water-use ordinance revisions for a vote during a study session Tuesday afternoon.

The council will also consider its plans for transport planning, which will likely include the city’s continued participation in the regional transport authority’s program after the current 20-year mandate expires in 2026.

The city has a number of issues with developing the plan and would like changes that smaller jurisdictions oppose, in part because the city wants more power and flexibility within the RTA management cadre.

At the same time, the council wants to increase the city’s five-year vehicle tax by half a cent again with an election in May. To get a ballot for this ballot, the council would need to do so by February 1st.

The sales tax vote will feed into the RTA’s trash talk.

During the study session, the council will also be updated on the contamination of water supplies with polyfluoroalkyl substances, also known as PFAS.

Contamination of Tucson’s groundwater by this industrial chemical has forced the city to close 25 wells as clean-up efforts are underway.

Time has also been scheduled to receive an update on Tucson’s “electric car roadmap.”

Most of the Council agenda items for this week will take place during the afternoon study session, apart from one item that is scheduled for the agenda of the regular Council meeting: Raising the Living Wage Regulation.

Both amounts are below the current municipal minimum wage. That’s why the city government is asking for the numbers to be raised to $15 an hour with health insurance and $16.50 without health insurance. After that, wages would be adjusted for inflation.

Amphi and the ‘Rona

One thing that catches the eye of the trained eye when looking at the agenda of the Amphitheater Unified School District Governing Board executive is a coronavirus policy executive meeting item.

The board will seek legal advice on the conditions and containment measures of the pandemic. Now that could be all, including a lawsuit related to districts’ coronavirus protocols. It’s confidential. So the public doesn’t know.

But it could also be a policy change that would no doubt brighten the animal spirits of the Northwest Side. The county is currently requiring masks for students, teachers and staff.

Could that change? Could be. The superintendent’s update may contain a clue about the impact of COVID-19 on the school district if the Omicron variant strikes.

The board will also vote to authorize more than $200,000 in out-of-state travel for district staff and student travel for an unspecified amount. Business travel can excite people, but a lot of it seems to be for professional growth.

The board will also vote to continue a pilot program to buy back up to 10 days of teacher leave each academic year. The teacher would then be able to roll over the remaining three days to future years.

The Sahuarita City Council will vote on how to proceed with a new round of bonds to pay for work to be done in the Rancho Sahuarita community amenities district.

The council (which acts as the district’s facilities management committee) decides whether to spend $18 million on these improvements, which will be repaid by the owners moving into the district after the expansion.

The CFD was created in 2012 to enable the city to manage growth and ensure that growth pays dividends.

The council will also vote on replacing council member Melissa Hicks, who is retiring. Hicks was first elected to the council in 2011. In 2016, she retired as Captain of the Green Valley Fire Department.

The Tanque Verde School District Board of Directors will meet Wednesday and no agenda has been released.

The Marana Unified School District board of directors will meet Thursday, but no agenda has yet been released.

These meetings are midweek, so check back.

The Tucson and Vail school district boards of directors will hold meetings Tuesday, but no agendas were released as of 5 p.m. Friday, when the last of the late office workers went home for the weekend. So they will post them on Monday, giving district residents just one day to read the agenda and make arrangements for virtual attendance.

As long as the agendas are released by Monday afternoon, they would comply with state law requiring 24-hour notification of what board members will discuss during a public meeting.

How come you can’t be like the other jurisdictions give their constituents a full weekend with their agenda? There have long been (intentionally passive voice) some bodies/councils that delay the release of their agendas to limit the excitement and confusion of people who show up.

I’m just saying… you will never get into Harvard that way and it will go on your permanent record.