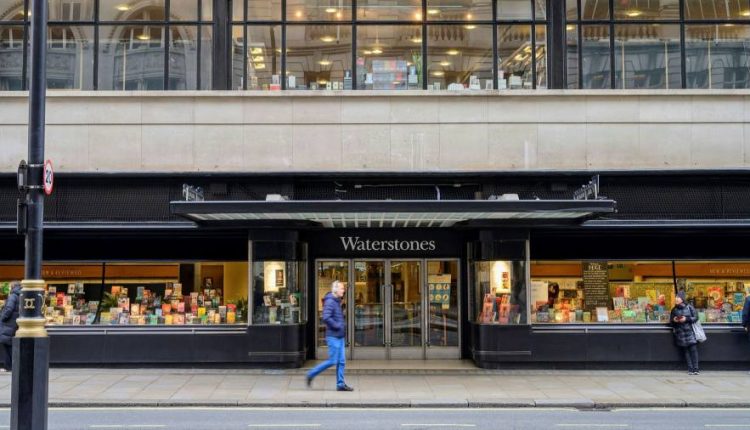 At the outset of the pandemic, James Daunt instructed managers at US chain Barnes & Noble to take every book off their shelves, “weed out the rubbish”, make each section flow and put their stores back together again.

The overhaul is a strategy that the managing director of Waterstones, the chain’s owner, has deployed many times over the past decade. It is one he may well turn to again at Blackwell’s, the 143-year-old bookseller acquired by the UK retailer last month, backed by its hedge fund owner Elliott Advisors.

The takeover adds the UK’s largest independent chain to a portfolio including Barnes & Noble, Foyles and Hatchards. It also shores up Waterstones’ position as a custodian of struggling book chains, with Daunt at the head of both the British retailer and Barnes & Noble.

As with previous takeovers, Waterstones intends to keep the Blackwell’s name. “I cannot think that anybody who cares about bookshops would want those [Blackwell’s stores] to close,” said Daunt, seated in the café of Waterstones’ flagship branch in London’s Piccadilly, the largest bookshop in Europe.

But for independent chains, it is difficult to support large stores such as the Oxford branch of Blackwell’s without deep pockets, Daunt added. Blackwell’s suffered repeated losses in recent years.

Toby Blackwell, the last remaining family owner of the chain, made several cash injections to provide working capital and fund digital expansion. During the pandemic, the group explored passing into staff ownership, a long-held ambition for Blackwell, but it was unable to find a bank to fund the restructure, former chief executive David Prescott told the Financial Times.

Waterstones, which has bought the 18 Blackwell’s stores for a figure in the low, single-digit millions, will refinance the company, investing in its stock to “allow it do its job well,” said Daunt. Prescott and sales and marketing director Phil Henderson left the business at the start of April.

The acquisition marks another page-turn in the slow transformation of British bookselling led by Daunt.

After successfully launching in 1990 the eponymous Daunt Books, a London-based chain that remains independent under his ownership, the 58-year-old former banker was appointed to rejuvenate Waterstones in 2011. After several years cutting costs and reworking strategy, including empowering booksellers to make each store unique, the company began to turn a profit by 2016.

You are seeing a snapshot of an interactive graphic. This is most likely due to being offline or JavaScript being disabled in your browser. 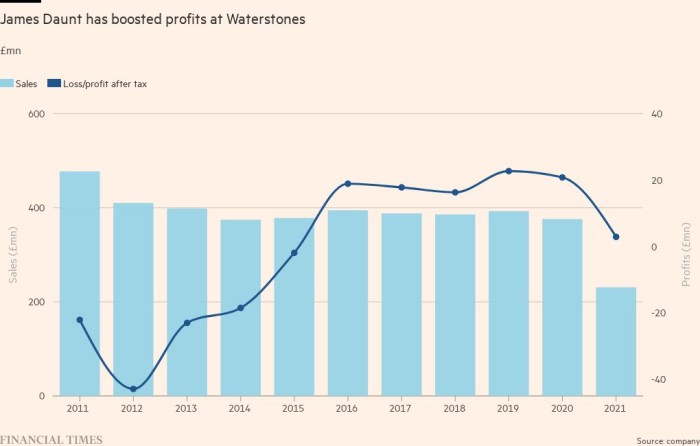 “One of the advantages of going bust is all of that complacency, that God-given right to exist, is finally punctured,” he said. “You never want to be back there again.”

Waterstones’ survival and revival took place under the ownership of Russian billionaire Alexander Mamut, who sold the business to Elliott in 2018. But it would be “catastrophic” today if the business were still under Russian ownership, Daunt said.

He rejected suggestions that Waterstones, financed by Elliott, was monopolizing high-street bookselling in the UK. “Amazon is clearly the dominant monopolistic bookseller, not Waterstones,” he said.

Elliott’s portfolio of British book brands was not enough to ward off the online behemoth, said Daunt. “If the United States has no main, effective physical bookseller, given the scale of the market, whatever the arrangement that large publishers [in New York] make with Amazon is the one that inevitably comes over here,” he said, explaining how Waterstones benefits from Elliott’s acquisition of Barnes & Noble and its 627 stores for $683mn in 2019. 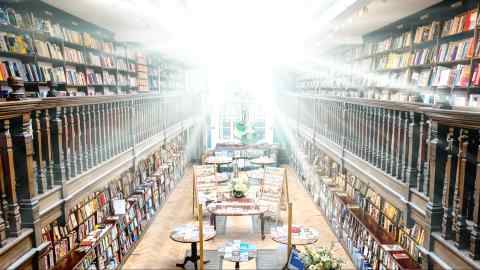 Still, US expansion has not been without its challenges. Daunt halved the number of Barnes & Noble’s head office staff and sacked 5,000 employees.

In the UK, Waterstones has been criticized for paying staff less than the real living wage, though Daunt defends the policy of employing people on what he calls “inadequate” entry-level wages, saying the company promotes quickly.

Waterstones can take comfort from Amazon’s failings in physical retail after the company last month said it would close its 68 bricks-and-mortar book, toy and homeware stores in the US and UK to focus on groceries.

But online sellers of print books are taking a greater share than ever. Etailers, dominated by Amazon, sold 37 per cent of print books in 2019, according to Nielsen Books and Consumers survey data, compared with 24 per cent for chain bookshops such as Waterstones.

That figure for etailers jumped to 49 per cent in 2020. “Until the pandemic, online enjoyed a fairly consistent, slow and steady increase and that’s accelerated in the pandemic,” said Philip Stone, media manager at Nielsen BookData. “All the signs are it will return to a state of steady increase again.”

You are seeing a snapshot of an interactive graphic. This is most likely due to being offline or JavaScript being disabled in your browser. 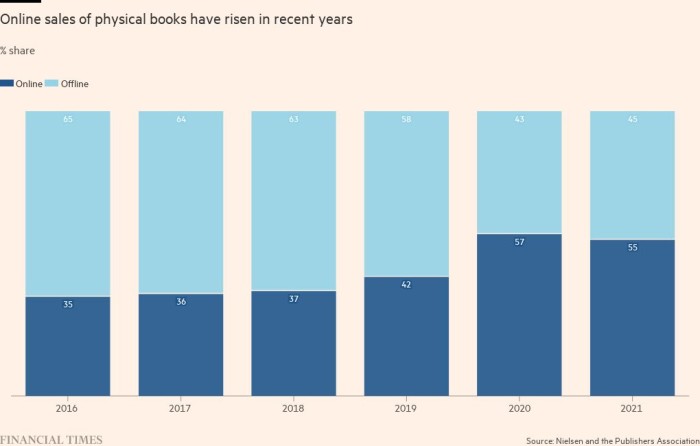 There is no complacency in the fight to save bookshops, but data from the Booksellers Association offer some encouragement. The group counted 1,027 independent bookstores among its members at the end of last year, the highest level since 2013. It is the fifth consecutive year of growth after more than two decades of decline.

Sales at Barnes & Noble have started to rise, while Daunt said Waterstones had recovered from a dip during the pandemic. Sales dropped from £376mn in the year to April 2020 to £230.9mn in 2021.

Daunt expects Elliott to exit his investment in a matter of years, his end goal being to take Waterstones public. The underlying motivation remains the same as when he launched Daunt Books: “Our job as booksellers matters.”