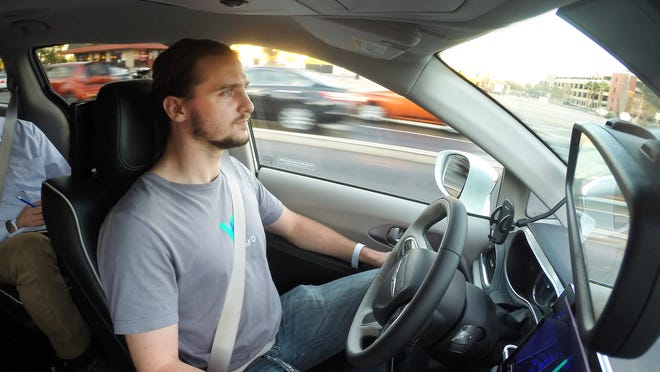 Waymo plans to begin offering rides for a fee to people in central and downtown Phoenix to test its autonomous Jaguar I-Pace vehicles, the company announced.

People interested in using the vehicles can sign up using the Waymo app on their smartphone. Waymo, an affiliate of Google, will select people eligible for the program starting this week, allowing them to hail rides in the new service area.

Waymo has operated in an approximately 50-square-mile area covering parts of Chandler, Mesa and Tempe for years, both with a test program and a public ride service called Waymo One. Now it’s officially expanding to Phoenix.

It’s the first time Arizona riders have a chance to try the I-Pace vehicles rather than Waymo’s vans.

The company hopes to eventually connect the two Arizona service areas, allowing people to travel between Phoenix and Chandler in its vehicles.

How the Phoenix service will work

The company will charge for the rides in its electric Jaguar I-Pace vehicles, which will have a backup driver in them for now. Some rides in the Chandler area are fully autonomous with no driver in the Chrysler vans used there.

The “autonomous specialists” in the vehicles work for a partner company called Transdev.

Waymo operates I-Pace vehicles with no backup driver for its rides in San Francisco, so it’s likely to operate that way in Phoenix eventually.

Waymo has a few hundred vehicles operating in Arizona in the two areas.

The service launching in Phoenix is ​​called Waymo’s “Trusted Tester” program. It is a research project where participants offer feedback to the company. It is slightly different than the Waymo One commercial service.

When the same service launched in 2017 in the Chandler area, called the “Early Rider” program at the time, Waymo officials said they selected the initial testers based on people they felt would use the service regularly and offer constructive feedback. The rides initially were free to testers, then later were offered for a fee.

“This will be a highly interactive program where Trusted Testers use the Waymo One app to hail autonomous rides for their everyday mobility needs and provide customer feedback to us during and after their rides,” the company said in the Phoenix expansion announcement.

The company has tested vehicles in central Phoenix for months and announced in March it would begin offering rides first to Waymo employees and later to people in the test program.

“If you live or work in downtown Phoenix and want to join, just download the Waymo One app. You’ll then be able to create an account and express interest in joining our Trusted Tester program,” the company said.

Giving rides to testers will roll out slowly, the same way Waymo launched its service in San Francisco. It will start with a few customers this week and gradually expand, according to a company spokesperson.

Stressed by drought and pests, trees are losing resilience to changing climate