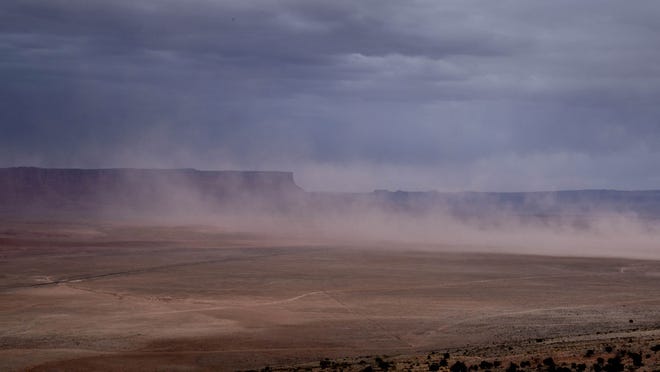 Forecasters report Monday’s southerly winds have restrained the smoky gray haze, which resulted from the Crooks Fire north of Flagstaff, into the northern regions.

The clearing comes as Phoenix prepares for fairly warm weather over the next few days, with Wednesday having a 35% chance of breaking 100 degrees.

“It’s going to be fairly warm over the next couple of days,” Mark O’Malley, meteorologist with National Weather Service in Phoenix, said. “High temperatures this afternoon in the lower-to-middle 90s, and tomorrow, it’ll be even warmer with temperatures in the upper 90s.”

On average, Phoenix breaks 100 degrees on May 2. Last year, the first 100 degree day was May 5. O’Malley said the Valley is “right on schedule” for Arizona’s stereotypical summer heat.

National Weather Service forecasters urge people to take precautions as we head into the warmer weather. Forecasters urge everyone to hydrate and to take breaks in shady or air-conditioned spots if they plan on working or recreating outside.

“Don’t spend too much time in the direct sunlight. Outside of a sunburn, which is very easy to get this time of year, you could become dehydrated very quickly,” O’Malley said.

Nearly 3,000 people visit Arizona emergency rooms because of heat-related illnesses annually, according to the Arizona Department of Heath Services. AZDHS recommends hydration in addition to monitoring the elderly or young for heat stroke.

According to the Arizona Department of Environmental Quality, southern winds will push smoke from the Crooks Fire away from Phoenix and toward Prescott, Prescott Valley, and around the Verde Valley.

“Light to moderate smoke impacts will be possible as the smoke interacts with terrain and may reach the ground from time-to-time during the afternoon,” said the smoke forecast for Tuesday.

Smoke from the Tunnel Fire burning northeast of Flagstaff will also be impacted by the forecasted light southern winds. There may be some light impact on Navajo and Hopi tribal land.