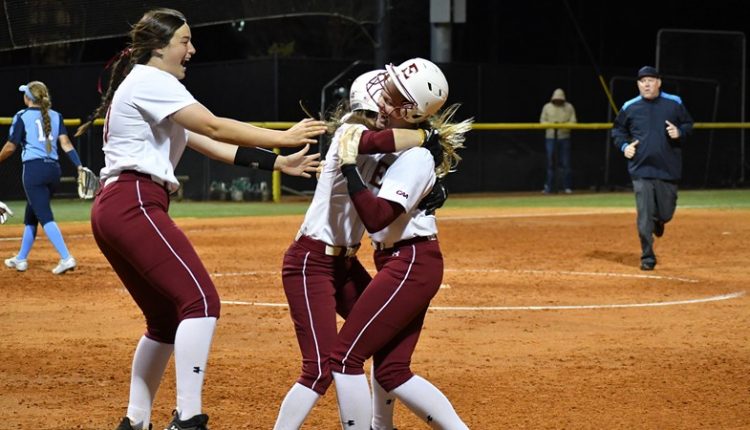 ELON, NC – A walk-off hit from first-year Kaitlyn Wells in the bottom of the seventh lifted the Elon University softball team to a 4-3 win over its intrastate rival North Carolina on Wednesday evening, Feb. 16, at Hunt Softball Park.

The win improved the Phoenix to 4-0 on the young season, matching its best start since 2019. It was also the fourth win out of the past five meetings that Elon has had over the Tar Heels, who suffered their first blemish of the year to fall to 4-1.

“We have so much respect for North Carolina and I feel they have respect for us as well,” said Elon head softball coach Kathy Bocock. “We are always going to battle each other and I think we were able to capitalize on some of their mistakes. I am proud of our team and the way they stepped up in a big game tonight and we were able to get the job done. “

• The Phoenix outhit the Tar Heels, 9-6, at the plate for its highest hit total of the season.
• Three players had multi-hit efforts for the maroon and gold with Wells, Megan Grant and Carley Davis each having two base hits. Wells drove in two RBIs in the contest.
• Chloe Hatzopoulos had her first career home run in the game in the second inning.
• Elon left seven base runners stranded while UNC had four.

• First-year Isley Duggins (2-0) won her second game of the season in her first collegiate start. The Burlington, NC, native pitched a complete game where she allowed six hits and three earned runs.

• The Tar Heels were the first team to get on the scoreboard in the top of the first. North Carolina had runners reach scoring position with one out after a stolen base, but Duggins induced the second out on a strikeout. Elon could not get out of the inning unscathed however as UNC’s Kianna Jones worked a full count before blasting a three-run home run to center to give the Tar Heels a 3-0 lead.
• Elon answered back in his home half of the second. Hatzopoulos took a 1-0 pitch over the center field wall for her first career round tripper, putting the Phoenix on the board to lead off the frame. North Carolina set down the next three batters as the game moved to the third inning.

The rookie with HR to center to put the Phoenix on the board!

— Elon Softball (@ElonSoftball) February 16, 2022 • The Phoenix got into a jam in the third as the Tar Heels had runners on first and third with two outs after a walk to Bri Stubbs. As Stubbs made her way to first, the Tar Heels attempted to catch the Phoenix off guard and score from third, but a heads up play from the Elon infield caused the runner to be tagged out at home.
• In the bottom of the fourth, Elon took advantage of a Tar Heel miscue to score his second run of the contest. Claudia Penny reached on an error before being replaced on the bases by Drew Menscer. Menscer would move to third on Davis’ two-out single down the right field line before crossing the dish on a wild pitch to bring the Phoenix within one, 3-2.
• Wells would eventually send the Phoenix home happy in the bottom of the seventh. Elon had each of its first three batters reach to start the frame and load the bases with Roswell, Ga., native coming to the plate. Wells took the first pitch she saw and sent it to the wall in center field with the defender tracking it towards the warning track. The ball fell into the defender’s glove but a collision at the wall forced the ball to become free as Elon scored the two go-ahead runs to come away with the 4-3 victory.

The maroon and gold is back to host its second tournament of the season, the Phoenix Invitational, this weekend, Feb. 18-20. Elon is scheduled to play five games versus the field of Providence, UMass-Lowell and Morgan State.

Bowers casts doubt on plan to break up Maricopa County