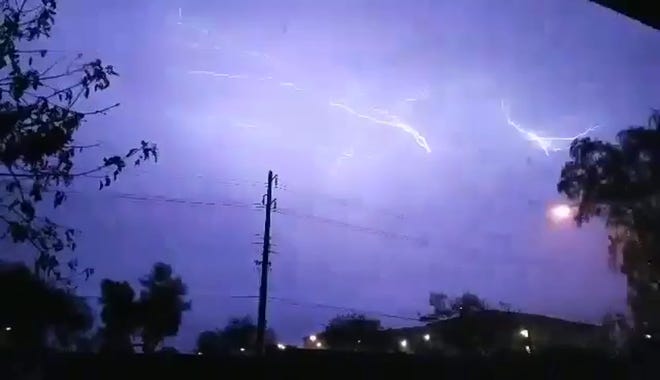 Isolated thunderstorms will develop in the greater Phoenix area and other parts of the state, according to the National Weather Service in Phoenix.

On Wednesday morning, the weather service tweeted that there was a “fair chance” between 30 and 50% for thunderstorms that begin in the afternoon in the lower deserts and in the greater Phoenix area.

“It could actually develop a little earlier than we normally see for the Phoenix area,” said Jaret Rogers, a meteorologist with the NWS in Phoenix. “We expect showers and thunderstorms to develop in some areas by the afternoon.”

Rogers said the thunderstorms projected for the afternoon through into the evening could hit all areas from Phoenix to Yuma and move towards California.

The National Weather Service issued an important weather alert for parts of Maricopa County by 4:30 p.m. At 3:50 p.m., a severe thunderstorm was located near Goodyear, moving northwest, with the potential for gusts of wind up to 60 miles per hour.

From 4:20 p.m. it was near Wickenburg. A severe thunderstorm warning was issued for Wickenburg, which could see a gust of wind of 70 mph, hail the size of nickel, and rain.

“One thing that stands out today is that we have a lot of moisture in the air,” said Rogers, adding that the moisture content is closer to record levels. “That gives us more confidence that storms will develop and if they do there will certainly be the potential for heavy rains and severe thunderstorms.”

“We see it every monsoons, but we are now at a time where we certainly have a lot of moisture,” he said.

At the beginning of the month, according to the National Weather Service for Phoenix in July, an “above-average” rainfall was forecast.

“The month-long precipitation forecast from the Climate Prediction Center now gives Phoenix a ~ 42% chance of above-average precipitation for the month of July,” tweeted the weather service.

Rogers said the rainfall varied across regions in the state that month.

The storm chances will increase on Thursday

From Wednesday, Phoenix Sky Harbor International Airport reported less than half an inch of rain for the 2021 monsoon. Even so, other parts of the state have received over an inch of rain, Rogers said.

“It’s pretty typical that this time of year it rains a lot in one area and not so much in another,” he said. “Widespread rainfall will help most areas get above average rainfall for this time of year. We can actually bring this Thursday into the weekend.”

According to the weather service, the probability of storms increases to 50 to 60% from Thursday evening with the risk of flash floods.

The Meteorological Service has issued flash watchers for Phoenix, Tucson, and Flagstaff, and most of central and eastern Arizona, including the areas near Prescott and Mohave. The clock starts on Thursday evening and lasts until late Saturday evening.

“We expect fairly active weather over a 48-hour period with a higher risk of flash floods,” said Rogers.

There were no widespread or significant flash floods in the greater Phoenix area. However, there have been other parts of the state where significant flooding has occurred, including Flagstaff and towards the Globe.

According to the Arizona Public Service outage map, approximately 3,086 customers in Flagstaff from the Route 66 to Melissa Drive and Woody Mountain Road to Knoles Drive areas suffered outages due to an interruption in the main power line.

Flash flood monitoring indicates that conditions are “favorable” for flooding, but that doesn’t mean they will occur in every area, Rogers said.

Given the danger of flash floods, Rogers advised not to drive on flooded roads or car washes.

“Avoid even normal dry washes as these can fill up with water very quickly,” he added. “Awareness is number 1, safe only practice safety when you are on the streets, do not try to cross flooded streets.”

The threat of blown dust and high winds are also other conditions people need to consider, particularly in areas west of Phoenix, Rogers said.

If a widespread dust storm is building up, a dust storm warning could be issued, indicating that the conditions are very dangerous.

If you are driving and a dust storm begins, Rogers recommends stopping on the side of the road as much as possible instead of trying to drive slowly or stopping where you are.