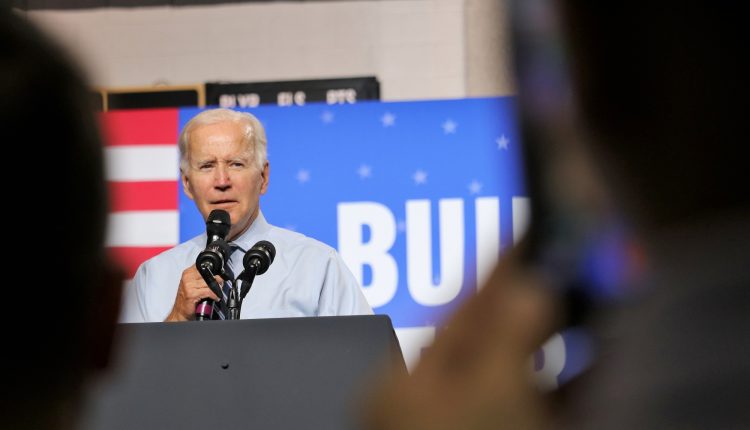 What Biden has and, maybe just as importantly, has not done

President Biden has announced he will be cutting or eliminating student loan debt for millions of Americans. It’s the latest in a growing list of tangible, beneficial achievements by his administration.

One of the best ways to assess what President Biden has accomplished since taking office is to put his administration’s achievements into context — and, while we’re at it, to talk about what he has not done.

The context: The global pandemic.

When Biden took office in January 2021, the world was still reeling from a once-in-a-century global pandemic that was killing more than 3,000 people in the U.S. a day and climbing.

On the day of his inauguration, Biden told the country his strategy for combating the virus would be “based on science, not politics” and “truth, not denial,” while pledging to administer 100 million shots of the COVID-19 vaccine in his first 100 days in office.

By late April 2021, the Biden administration had doled out 200 million shots of the vaccine. Nineteen months later, just over two-thirds of all Americans have been vaccinated and the nation’s COVID-19 death toll has dropped precipitously — though the pandemic is still not over.

What Biden did not do is downplay or outright deny the deadly nature of the virus, unlike Donald Trump and his allies, who’ve done all they can to convince the public, without evidence, that the threat from COVID-19 was always overblown and/or part of a secret plot by the Democrats to make Trump look bad.

Let’s be clear: More than 1 million Americans in the U.S. have died of COVID-19 and hundreds of thousands of them would likely be alive today if more people had gotten vaccinated and Trump and company had not spent most of 2020 saying, “It’s going to disappear. [the virus] is disappearing” — a claim he repeated dozens of times, including the day after checking out of the hospital where he was being treated for, you got it, COVID-19.

The context: When Biden took office our economy was still reeling from the devastating impact of the pandemic, which, let’s not forget, had all but paralyzed the richest economies around the world.

What President Biden did was get to work immediately working with Democrats in Congress — because Republicans opposed the entire effort — to pass the $1.9 trillion American Rescue Plan Act. By early March 2021, Biden had signed the bill into law.

Critics blame Biden’s mass infusion of federal dollars into our economy triggered today’s high inflation. Really? How about the fact that some 20 million Americans were thrown out of work practically in one fell swoop at the peak of the shutdown in 2020 because of the pandemic — the effects of which were exacerbated by the Trump administration’s disinformation campaign, incompetency, lack of leadership, and petty attacks on his political enemies.

And how about the fact that, with millions in the U.S. and hundreds of millions around the world thrown out of work, global production in many sectors came to a screeching halt in 2020. Then, as people began to go back to work, the economy had to ramp up again so quickly that it created historic bottlenecks along major shipping routes, leading to mass product shortages, higher demand, and spiking prices?

Plain and simple, if the American Rescue Plan had not been passed by Democrats, the U.S. economy would have tumbled into recession — or far worse. Biden’s efforts helped millions stave off hunger, unemployment and eviction from their homes, it pulled millions of children out of poverty, and it helped save tens of thousands of small and big businesses.

Instead of falling into recession, the U.S. economy today is booming. More than 500,000 people found jobs last month, the unemployment rate is nearly half of what it was when Biden took office, wages are up, gasoline prices are dropping fast, and the country’s deficit has dipped by $350 billion with projections that somewhere “between another $500 billion and $1 trillion dollars in further reductions” could occur before the end of the year.

Yes, high global inflation is real and punishing, especially to those at the bottom of the economic ladder. But if we have to face inflation in the short run, isn’t it better to face it with a job under our belts instead of being unemployed and having to live through a recession that would inevitably lead to a massive loss of jobs? Of course it is.

The context: Our country’s infrastructure has been in desperate need of repair for decades. Our roads, bridges, airports, dams, and railroads are crumbling. Meanwhile, tens of millions of people, especially in rural America, have gone without internet access during what some have labeled the “Fourth Industrial Revolution.”

Enter President Biden’s bipartisan — and, yes, it really is bipartisan — $1 trillion infrastructure bill. The bill’s passage will lead to millions of new jobs in the coming years. Many of the projects have already begun.

“There are over 5,300 infrastructure projects getting underway across the country — in every state, and multiple in every congressional district,” CNN reports. “They range from laying wires for rural broadband to modernizing the terminals at Los Angeles International Airport.”

Unlike his predecessor, what Biden did not do was spend four years promising but failing over and over again to even offer up an infrastructure bill, much less get it passed.

The context: The Biden administration is run now by experienced professionals who have the country’s best interests in mind.

Other stuff Biden has done: He ended U.S. involvement in the war in Afghanistan (the longest in U.S. history); he signed the first major gun reform bill in decades (though it does not go far enough to curb today’s wave of mass shootings); he signed a bill that makes us less dependent on overseas manufactured computer microchips, the lifeblood of the Fourth Industrial Revolution; he signed the Inflation Reduction Act, which will cut the cost of prescription drugs, ensure more people have health insurance, and provide hundreds of billions to combat climate change; he rallied the world to help defend Ukraine against Russian dictator Vladimir Putin (who Trump called a genius for invading Ukraine); he hired what is said to be the most diverse presidential administration staff in U.S. history; and he just ordered that student loan debt be cut by as much as $20,000 for many borrowers.

And as for other stuff he did not do?

He didn’t steal top secret government documents, including information about our nuclear arsenal, from the White House and keep it stored in the basement of a Florida golf resort; he hasn’t supported anti-democratic, white nationalist candidates running for office who are still circulating false claims that the 2020 election was stolen from Trump; he hasn’t ordered federal immigration authorities to separate children from their families at the border as a way to punish them for escaping poverty and persecution; he has not appoint judges to the Supreme Court like the ones who recently stripped women of a constitutionally protected right to decide what to do with their own bodies; he didn’t try to overthrow the government by urging fellow Republicans to pose as fake electors; and he didn’t direct a violent mob of domestic terrorists to attack the U.S. capitol to keep Congress and Vice President Mike Pence from certifying the votes cast by the country’s actual electors.

The context: President Biden has acted like the rational, informed, fair-minded, decent human being that he is instead of like the petty, self-serving, vengeful, racist, ignorant, criminal-minded, misogynist, and wannabe dictator who had the job before him.

All-in-all, that’s quite an accomplishment.

Unraveling the Interplay of Omicron, Reinfections, and Long Covid