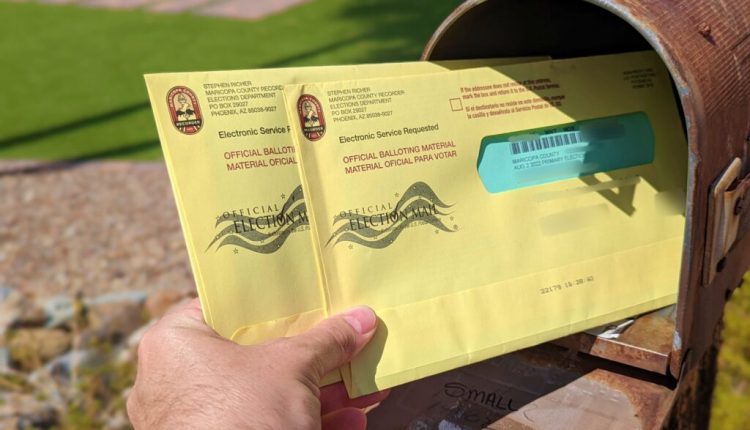 Whether voters fill out their ballots at home or head to the polls for the primary election in Arizona this summer, they’ll see some minor changes from 2020, but most new laws you may have heard about won’t affect this primary.

Lawmakers considered more than 100 bills to address perceived election problems based on unsupported allegations emanating from last year’s Senate-led review of Maricopa County’s 2020 election and former President Trump’s stolen-election claims. The most extreme measures did not pass, including attempts to end mail-in voting as Arizonans know it. The vast majority of Arizonans cast their ballots via the state’s long-running vote-by-mail option.

Some changes did get approved by the legislature and signed into law this year and last. The new laws passed this year, though, won’t go into effect until September at the earliest, which means the general election may have some slightly different rules than the primary.

Early voting began this week. If you’re on the early voting list, you can expect to get your ballot in the mail in a few days. Some voters have already gotten their ballots — election officials sent military and overseas voters’ ballots in mid-June.

Here’s a rundown of changes you could see when you cast your ballot for the August primary.

During the 2021 legislative session, lawmakers approved some small changes to the envelopes you receive from elections offices, including the one that contains your ballot and return envelope and the return envelope itself.

One 2021 law stipulates that early ballot envelopes cannot reveal political party affiliations. Counties use codes instead of identifying parties on the envelopes, which allows workers to make sure the ballot type matches the envelope.

Another 2021 law requires counties to add language to their ballot envelopes allowing someone to check a box indicating it should be returned to the election office if the person it’s addressed to no longer lives at that location.

At the polls, another law approved in 2021 calls for voters to be offered a “privacy folder,” essentially a file folder to hide their vote, though they are not required to use it.

Where you will vote may have changed

This year, Maricopa County added many more in-person voting locations using a vote center model, meaning you can vote anywhere instead of in your specific precinct. Vote centers aren’t new for the county this year.

Some longtime polling sites in Maricopa County weren’t used in 2020 because of physical distancing concerns during the worst of the pandemic, said Megan Gilbertson, a spokesperson for the county’s elections department. Those sites will be back in use this year.

Most counties will use some kind of vote centers this election. Pima County, for instance, switched to a vote center model for the first time this year. The county has held mock elections to show voters how new equipment, like ballot-on-demand printers and e-pollbooks, will work.

If you’re an independent, you can make a one-time request to vote in either the Republican or Democratic primary. To do so by mail, you need to request which ballot you want by July 22. (Maricopa voters can do so online here.) If you’re voting in person, you can request a party’s ballot on site at the polls.

To vote your ballot at home, Maricopa County says to use blue or black ink. At the polls, the county will hand out markers with fast-drying ink — but not Sharpies — so that selections don’t smudge, Gilbertson said. While presenting the county’s 2022 election plan, Maricopa County Director of Elections Scott Jarrett told the county’s board of supervisors that Sharpies won’t be used this year, but not because they affected anyone’s votes in 2020. Instead, the county conducted tests on multiple types of marking devices and found a marker that didn’t bleed through ballot paper as much as Sharpies. (Bleed-throughs in 2020 did not affect votes because the ballots are designed with offset columns of the bubbles voters fill in.)

The county is still using Vote Secure paper, a recommended ballot paper to use with its Dominion machines, though the thickness of the paper will be different, Gilbertson said. Last cycle used 80-pound paper; this year it will be 100-pound. The increased paper weight also helps limit bleed-through, Jarrett told the board.

“We are using 100-pound paper for this election because we were able to get it,” Gilbertson said, adding that supply chain issues limited the availability of the heavier paper in 2020.

Counties can now begin tabulating early and mail-in ballots sooner, which will help with staffing and seeing results earlier.

A law approved in 2021 allows the tallying of ballots after a successful logic and accuracy test, which every county recently passed, and after the voter’s envelope signature is verified. Previously, counties could start processing ballots as soon as they received them but couldn’t count them until two weeks before Election Day. Results won’t be released until 8 p.m. on Election Day, per Arizona law.

In the 2020 primary, Maricopa County was able to include all early ballots except those received on Election Day into its first drop of results at 8 p.m., Gilbertson said.

The upside of the new law is that “it allows our staff to not work overtime, or as much overtime,” Gilbertson said.

Active Early Voting List in place, but won’t drop you yet

One of the most significant shifts to election law in 2021 changed the state’s Permanent Early Voting List — the feature of Arizona elections that allows voters to receive a ballot in the mail for every election without re-applying for one — into the Active Early Voting List. The shift is more than semantic.

In order to stay active, you need to participate by mail ballot in at least one election every four years, including primary and general elections and municipal elections. Voters will receive a notice from their recorder by mail if they don’t vote at least once in that period, asking them if they want to remain on the Active Early Voting List. If they don’t respond saying yes, they’ll be removed from the list. Voters may also request an early, mail-in ballot as a one-time request instead of joining the AEVL.

It’s not yet clear how many voters will be removed from the active list and no one will receive notice of removal until after the 2024 election cycle. Voters would remain registered if they’re removed from the list, they just won’t automatically receive a ballot via mail anymore. The law is the subject of a lawsuit by groups that claim it violates the federal Voting Rights Act and is racially discriminatory.

Gov. Doug Ducey signed several new voting-related laws in the 2022 legislative session, though they won’t be in effect until the general effective date for new legislation, which is Sept. 24 this year.

Among those newly signed bills was House Bill 2492, which requires federal-only voters to provide proof of citizenship before casting a ballot. Currently, voters who don’t provide proof of citizenship can’t vote in state elections, but they can vote in federal ones, like congressional and presidential contests. A similar Arizona law went all the way to the U.S. Supreme Court, which ruled in 2013 the state’s requirement was unconstitutional. This law is not in effect yet, though two groups immediately sued after Ducey signed it. The U.S. Department of Justice also sued Arizona over the law this week, saying the measure violates the National Voter Registration Act.

Other new bills include one that allows people to have their early ballot tabulated on-site at a polling place on Election Day if they show ID. Currently, voters can either drop off early ballots at a polling place or dropbox on Election Day, but can’t put their ballots directly into a tabulator if they want to see the final step of the vote-counting process for themselves. Another signed bill calls on the Arizona Game and Fish Department to provide voter registration forms or links to online voter registration to people who get hunting and fishing licenses. (A similar provision was in the state budget last year, but was struck down in an Arizona Supreme Court ruling over unconstitutional budgeting.)

Senate Bill 1008 increased the margins for automatic election recounts, which will likely result in far more recounted races, though that won’t be in effect until the general election.

One bill Ducey signed this week would require voter rolls to be compared to other databases and records, like voter registrations and driver’s licenses in other states, jury forms, and death records. Ducey vetoed a bill with some of these provisions earlier this year.