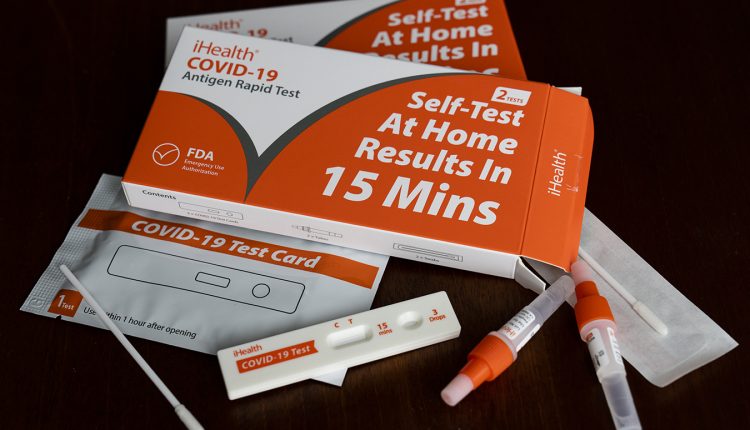 What Patients Can Learn With Confidence From One Negative Rapid Test (Hint: Very Little)

Julie Ann Justo, an infectious disease clinical pharmacist for a South Carolina hospital system, hoped Christmas week would finally be the time her family could safely gather for a reunion.

Before the celebration, family members who were eligible were vaccinated and boosted. They quarantined and used masks in the days leading up to the event. And many took solace in negative results from rapid covid-19 tests taken a few days before the 35-person indoor gathering in South Florida to make sure no one was infectious.

But within a week, Justo and at least 13 members of her extended family tested positive for covid, with many feeling typical symptoms of an upper respiratory virus, such as a sore throat and a runny nose.

Like many other Americans, Justo’s family learned the hard way that a single negative result from an at-home rapid test, which takes about 15 minutes, is no guarantee that a person is not ill or carrying the virus.

There are just so many variables. Testing may come either too soon, before enough virus is present to detect, or too late, after a person has already spread the virus to others.

And most rapid tests, even according to their instructions, are meant to be used in pairs — generally a day or two apart — for increased accuracy. Despite that, a few brands are sold one to a box and, with the tests sometimes expensive and in short supply, families are often relying on a single screening.

While home antigen testing remains a useful — and underutilized — tool to curb the pandemic, experts say, it is often misused and may provide false confidence.

Some people mistakenly look at the home tests “like a get-out-of-jail-free card,” said Dr. William Schaffner, a specialist in infectious diseases at the Vanderbilt University School of Medicine in Nashville, Tennessee. “‘I’m negative, so I don’t have to worry anymore.’”

That is even more true now that the new more transmissible variant dominates the country.

“Omicron is so transmissible that it is challenging to use any kind of testing strategy in terms of get-togethers and be successful,” said Dr. Patrick Mathias, vice chair of clinical operations for the Department of Laboratory Medicine & Pathology at the University of Washington School of Medicine.

Rapid tests are pretty good at correctly detecting infection in people with symptoms, Mathias said, with a 70% to nearly 90% range of accuracy estimated in several studies. Other studies, some that predate current variants or were performed under more controlled settings, have shown higher rates, but, even then, the tests can still miss some infected people. That raises the risk of spread, with the chance rising dramatically as the number of people attending an event grows.

Results of antigen tests are less accurate for people without symptoms.

For the asymptomatic, the rapid tests, “on average, [correctly] detect infection roughly 50% of the time,” said Shama Cash-Goldwasser, an adviser for Prevent Epidemics at Resolve to Save Lives, a nonprofit group run by Dr. Tom Frieden, a former director of the Centers for Disease Control and Prevention.

Looking back, Justo said her family took precautions, but she acknowledges missteps that put them at increased risk: Not all family members were tested before getting together because of a shortage of test kits. Some members of her family who could find rapid tests tested just once because of the need to ration tests. And in attendance were several children under age 5 who are not yet eligible for a covid vaccine. They were later among the first to show symptoms.

“We probably were relying too heavily on negative rapid tests in order to gather indoors with others without other layers of protections,” she said.

Even if everyone tested properly before the party, health experts said, it wouldn’t mean all attendees are “safe” from getting covid. Testing merely reduces the risk of exposure; it doesn’t eliminate it.

Other factors in assessing risk at a gathering: Is everyone vaccinated and boosted, which can help reduce the likelihood of infection? Did attendees properly follow all the steps outlined in the test kits’ instructions, which can differ by brand? Did anyone test too early after exposure or, conversely, not close enough to the event?

One critical detail “is the timing of the test,” said Schaffner at Vanderbilt. Another, he said, is how well the tests can spot true positives and true negatives.

Test too early, such as within a day or two of exposure, and results won’t be accurate. Similarly, testing several days before an event won’t tell you much about who might be infectious on the day of the gathering.

Schaffner and others recommend that self-testing start three days after a known exposure or, if one feels ill, a few days after the onset of symptoms. Because the timeline for detecting an infection is uncertain, it’s always a good idea to use both tests in the kit, as instructed — the second one 24 to 36 hours after the first. For an event, make sure one of the tests is performed on the day of the gathering.

Antigen tests work by looking for proteins from the surface of the virus, which must be present in adequate amounts for a test to spot. (Lab-based PCR tests, or polymerase chain reaction tests, are more accurate because they can detect smaller amounts of the virus, but they take longer to get results, possibly even days, depending on the backlog at the labs.)

Covid markers may linger as remnants long after live virus is gone, so some scientists question the use of tests — whether antigen or PCR — as a metric for when patients can end their isolation, particularly if they are looking to shorten the recommended period. The CDC recommends five days of isolation, which can end if their symptoms are gone or resolving, with no fever.

Some patients will test positive 10 days or more after their first symptoms, although it is unlikely they remain infectious by then.

Still, that means many people are using the rapid tests inappropriately — not only over-relying on them as a safeguard against covid, but also as a gauge for when an infection is over.

Rapid home tests need to be used over multiple days to increase the chance of an accurate result.

“Each individual test does not have much value as serial testing,” said Dr. Zishan Siddiqui, chief medical officer at the Baltimore Convention Center Field Hospital and an assistant professor of medicine at Johns Hopkins University. And, because the tests are less reliable in those without symptoms, he said, asymptomatic people should not be relying on a single rapid test to gather with friends or family without taking other mitigation measures.

Worse still, a recent study looking at the omicron variant found that rapid tests could not detect the virus in the first two days of infection, even though lab-based PCR tests did find evidence of covid.

The study examined 30 vaccinated adults in December 2021. “Most omicron cases were infectious for several days before being detectable by rapid antigen tests,” according to the study, which has not been peer-reviewed.

False negatives are also more likely when the extent of the disease in a certain area, called community spread, is rampant, which is true for most of the United States today.

“If there’s a lot of community spread, that increases the likelihood that you have covid” at a gathering, explained Cash-Goldwasser, since one or more attendees who tested negative may have received a false result. Positivity rates are running over 25% now in some U.S. cities, indicating a lot of virus is circulating.

So, right now, “if you get a negative result, it’s important to be more suspicious,” she said.

Vaccinations, boosters, masking, physical distancing, ventilation and testing separately are all imperfect strategies to prevent infection. But layered together, they can serve as a more effective barrier, Schaffner said.

“The rapid test is useful” — his own family used them before gathering for Thanksgiving and Christmas — “but it’s a barrier with holes in it,” he added.

The virus moved through those gaps to crash the party and infect the Justo family. While most of the attendees largely had mild symptoms, Justo said she was short of breath, fatigued and experienced headaches, muscle pain and nausea. It took about 10 days before she felt better.

“I certainly spent a lot of time going back to what we could have done differently,” Justo said. “Thankfully no one needed to go to the hospital, and I attribute that to the vaccinations — and for that I am grateful.”