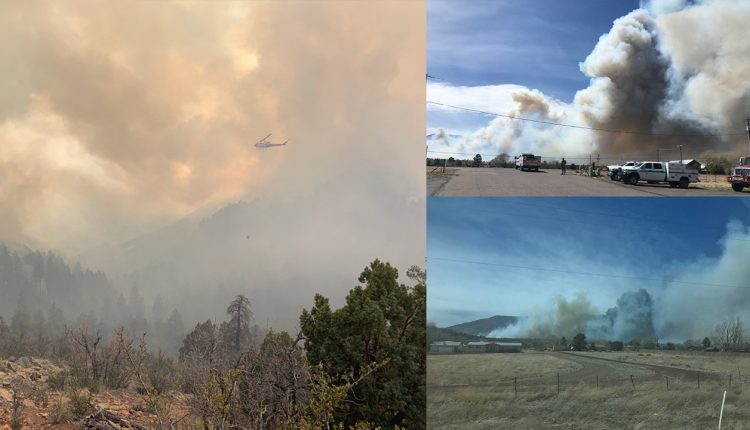 What to know about the fires burning in the state

A windy day with a high near 89° for the Valley.

PHOENIX – Peaks wildfire season has started in Arizona as several fires burning more than 100 acres each have popped up across the state.

We have a look at each fire, how big it is, the communities impacted, and who should be evacuating, or who should be ready to evacuate.

Below is a map of the different wildfires across the state:

the Tunnel Fire began on April 17 near Flagstaff in Coconino County. Officials say the fire is rapidly spreading in a northeast direction due to high winds.

A Red Cross Shelter is open for residents evacuated due to the Tunnel Fire at the Sinagua Middle School, located at 3950 E.Butler Ave.

The cause of the fire is unknown and currently under investigation.

More information on the Tunnel Fire can be found here.

the Crook’s Fire burning in the Prescott National Forest has prompted evacuation orders for some communities and has others on alert.

The Crooks Fire was discovered Monday, April 18 around 10 am It’s about two miles north of Palace stationjust off Senator Hwy.

A shelter has been set up at Findlay Toyota Center in Prescott Valley. The address is 3201 Main St.

More information on the Crooks Fire can be found here.

Presumido Fire burning at 150 acres in Pima County on March 27. Photo by Arizona Department of Forestry and Fire Management

The Arizona Department of Forestry and Fire Management says a wind-driven fire that sparked near Sasabe in Pima County, close to the Mexico border, is now completely contained.

More information on the Presumido Peak Fire can be found here.

It’s barely the first week of March, but firefighters in eastern Arizona are already battling the year’s first wildfire in the state. The Ranch Fire has burned near 1,700 acres near Concho and is 95% contained.

It was barely the first week of March, but firefighters in eastern Arizona already battled the year’s first wildfire in the state. The Ranch Fire burned nearly 1,700 acres near Concho.

More information on the Ranch Fire can be found here.

Pilots will attempt to swap planes in mid-air on Sunday – ^