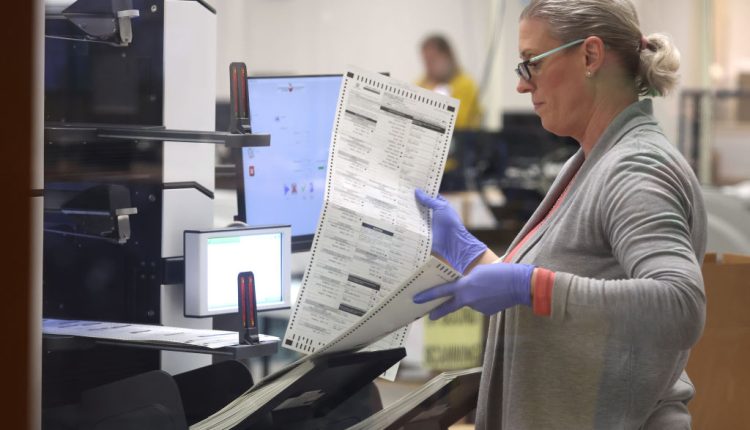 Maricopa County saw widespread problems tabulating ballots on Election Day on Tuesday, and answers are still emerging about what happened.

All voters were still able to cast ballots, but many were rightfully concerned because they couldn’t see their ballots counted on site, and many questions remain about the problem.

Here’s what Votebeat knows so far, and what questions remain.

Vote-counting machines were unable to count ballots at about 30 percent of Maricopa County vote centers on Election Day, causing concerns for voters and some long lines.

By early afternoon, Maricopa County officials had figured out a fix: Changing a setting on the printer so that the toner printed darker.

How many voters did this affect?

We will never know exactly how many, but it was at least 17,000 voters.

We know this because voters who were having trouble getting the machines to read their ballots were told to instead put them into a slot in a secure box, labeled “door 3,” to be taken back to the county’s election center and counted later.

Additional voters could have decided not to do that, instead choosing to properly discard their ballot, known as a “spoiled ballot,” check out at that location, and go to another location to cast their ballot

When did the county learn about the problem, when was a fix discovered, and when was the problem fixed?

By around 7 a.m., the county was seeing enough widespread problems to call on backup. Technicians from Runbeck Elections Services, which manufactures ballot printers and provided the county at least some of its printers, were dispersed to vote centers to help the county’s technical staff figure out the cause, according to Runbeck CEO Jeff Ellington.

Around 8 a.m., County Supervisors Chairman Bill Gates tweeted out tips for voters, giving them the options above. By 8:30 a.m., county officials knew of problems at “a bit more than” 10% of the 223 voting locations, according to a text message a county spokesperson sent Votebeat at the time.

Shortly before 9 a.m., they knew of issues at about 20% of vote centers, which they announced at an impromptu news conference at the central elections center. At the time, Gates said that they had “been able to remedy it at some centers.”

He also said that the county did not know what was causing the glitch. Runbeck’s Ellington told Votebeat that the company’s technicians “thought they knew the problem early, but needed to do appropriate testing and confirmation before rolling out the solution.

Once the solution was agreed to, the county and Runbeck sent a team out to change the printer setting in all locations. Because the county is so large, it took time to get to all the sites that needed the fix, Ellington said.

Gates said at a news conference that the county had figured out the fix by 1 p.m. on Election Day. By 4 p.m., the problem had been solved at most of the 70 affected locations. By the time polls closed, county officials said they thought the solution was in place at all or nearly all locations.

There are two ways those ballots could be counted at the central elections center. The county’s election director was confident they could be counted by vote-counting machines there, because those machines use different technology to count the ballots.

If the machines rejected the ballots there, though, the ballot would need to be duplicated by hand. A bipartisan team transfers the voters to a new ballot, which is then sent through the machines. The original ballot is not counted, but the county keeps it to have a record of the original vote.

At a 4 p.m. news conference Thursday afternoon, Gates said that they had started running the 17,000 ballots through the vote-counting machines and they were “running through well.”

“The results so far have been very positive on those,” Gates said, adding that the county would have more to share on that later.

What printers does the county use?

The county had two or three ballot printers at each location. The larger locations had three.

The county used two brands of printers, Lexmark and Oki, according to the county’s 2022 Elections Plan.

The Oki printers are much smaller, mass-market printers. They were the ones that needed the settings changed, Megan Gilbertson, spokesperson for the election department, told Votebeat on Friday. The county has been using those printers only since 2020, according to the elections plan, when it “proved to be a very reliable BOD printer.”

The Lexmark printers were used at larger locations and sites open during early voting, since that requires “the use of a larger more robust ballot on demand printers,” according to the plan. “This printer excels at producing high quality ballots, envelopes and receipts in as little as 5.5 seconds per print item.”

The county contracted with Runbeck to purchase both brands, Gilbertson told Votebeat on Friday. “Both printers were purchased in consultation with Runbeck, including the software, firmware and retrofitting to turn commercial off-the-shelf printers into ballot-on-demand printers,” Gilbertson said.

Votebeat requested the county’s contract for the printers on Thursday and that request is still pending.

Votebeat asked how many Oki printers the county used during the primary and is awaiting an answer.

What printer setting was changed to fix this?

The fix set all three paper types to “heavy,” she said. It’s unclear why the settings for receipts and envelopes could have affected the print quality of ballots.

The county “prepares the printers according to Runbeck’s recommendation and with the support of our vendor,” Gilbertson told Votebeat.

Why didn’t this cause problems in early voting or the primary election?

For the primary election, we do know that the county used fewer printers. County officials have not yet responded to Votebeat’s question about how many Oki printers were used in the primary but has said that some were used.

Machines at a small number of locations saw problems, but the cause was thought to be the types of pens voters were using.

It’s also unclear how many Oki printers were used during early voting. The election plan says that sites open during early voting require the use of the Lexmark printers, which it says are “larger more robust ballot on demand printers.”

The county may not have spotted the problem during early voting because it does not count ballots on site at vote centers during early voting. Ballots are brought to the central elections center to be counted. And those machines are not having problems reading the 17,000 ballots so far, according to county officials.

What testing was done on the printers? Why wasn’t this caught then?

The county tests the printers before the election begins, along with when they get to a vote center. During what’s called a logic and accuracy test of vote-counting machines, the county uses mail-in ballots that Runbeck prints as well as ballots printed from the county’s printers.

Also, the county does a stress test on the printers. “During the stress test, we print hundreds of test ballots in quick succession and run them through our precinct-based tabulators,” Gilbertson said.

It’s not clear why this did not catch the problem.

County officials have said that they will be investigating the debacle further after the election. Gates has repeatedly apologized to voters, saying that this cannot happen again.

He’s also defended county workers, saying there is “no perfect election,” and that there was no fraud or malfeasance involved.