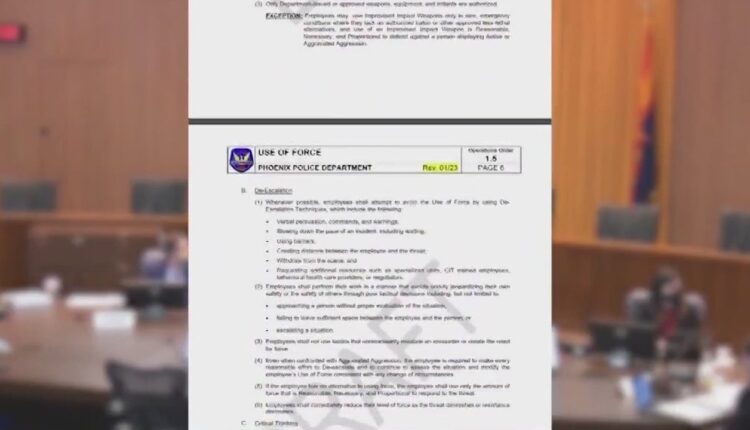 Phoenix Police asking for public input on use of force policy

Phoenix Police is seeking the community’s input before making changes in its use of force policy. FOX 10’s Lauren Clark has the story.

PHOENIX – Officials with the Phoenix Police Department are asking the community for input, after the department revisited its use of force policy.

On Jan 11, we obtained a draft document on the policy. While the draft is not the full use of force policy, it does cover a number of issues.

“Chief [Michael] Sullivan is very clear about this when he talks about meaningful community engagement,” said Assistant Phoenix Police Chief Bryan Chapman. “This is not a checkbox for him. This is one facet of several where we hope to have dialogue with the community on a variety of topics.”

Here’s what you should know about what police officials in Arizona’s largest city have done, and what they are proposing, in terms of policy changes.

Why are police officials asking for public input?

The invitation for public input follows several incidents involving allegations of excessive force with the department in the past few years.

In addition, Phoenix Police became the target of a widespread sample by the US Justice Department in 2021. Attorney General Merrick Garland said the probe will, among other things, also examine whether police have engaged in discriminatory policing practices and will work to determine if officers have retaliated against people engaged in protected First Amendment activities.

Were there recent use of force incidents that led to deaths?

A police shooting in Ahwatukee that resulted in the death of Ryan Whitaker happened in 2020.

In 911 calls made to Phoenix Police on the night of the shooting, portions of which were released by police in July 2020 via audio recordings, the voice of a man told 911 dispatchers of a domestic dispute incident.

“I can tell they’re just at each other’s throats down there,” said the man on the 911 call.

Body camera video released by Phoenix Police shows two Phoenix Police officers walking to an apartment. Police say Whitaker came out the door holding a gun, and stepped toward one of the officers. Investigators say the officer who fired his weapon feared for the life of the other officer.

Following the shooting, Whitaker’s girlfriend was heard screaming and stepping out of the apartment with her hands in the air.

“Why did you guys shoot him?” the girlfriend was heard yelling to police officers at the scene.

Whitaker’s girlfriend later told police that she and Whitaker were playing a video game.

Whitaker was 40 at the time of his death, and his death sparked protests, along with demands for change.

“Nothing has been done, so the wound is just like how it was on the first day,” said Whitaker’s father, Alan Whitaker.

The officer who shot Whitaker was eventually reinstated to the Phoenix Police forceafter the County Attorney at the time, Allister Adel, declined to file charges.

“I still have a hard time living with the fact that my son died for nothing,” said Alan.

The Whitaker family accepted a $3 million dollar settlement with the City of Phoenix.

What’s in the draft document?

The draft document released by Phoenix Police officials is nine pages long, and listed in the document is a list of core values ​​in regards to use of force, including, among other things:

We were also told that getting public input on major policy changes is a new standard for Phoenix Police, going forward. In addition, mandatory training on the policy for officers will also be done, once the policy is in effect.

Where can I read the draft?

You can read the draft below.

What are officials saying about the draft?

“We want to be very transparent with the community about when we use force, how we report it, when it’s going to be reviewed, and the expectations organizationally that they have,” said Chapman.

Chapman said the document is formatted easily for people to understand.

“It’s very concise, easy to read, and levels out our levels of force in three areas,” said Chapman.

What are others saying about the draft?

Alan Whitaker said while he feels this step taken by Phoenix Police does not go far enough, he will be submitting his thoughts to the department.

“There’s a deeper issue than a written policy,” said Alan. “If you’re not disciplining them according to that policy, then it never works. It’s set up for failure, no matter what.”

Public input and comment period on the policy will last for two weeks, from Jan. 17 to Jan. 31. A link for the feedback form will be sent out when the comment period opens.

Will there be more comments on other police policies

More policies will be reportedly amended and released for comment, including those on reporting requirements and duty to intervene.