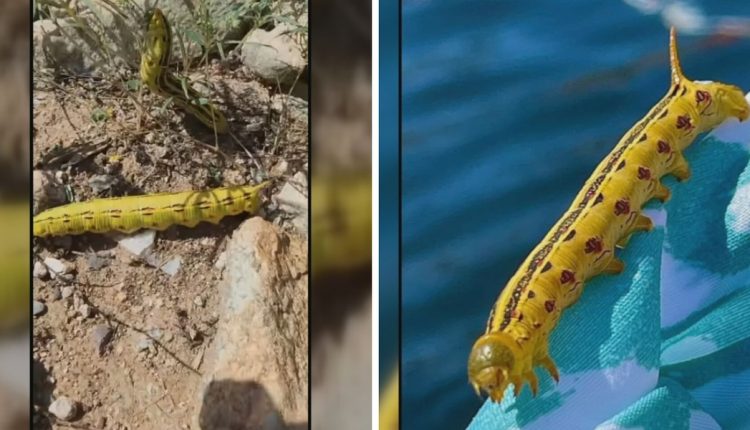 “They’re not really having any method to their madness there,” Butterfly Wonderland Entomologist Derek Kellogg. “They’re just trying to get from point A to point B.”

Kellogg says the end goal for these caterpillars is to come down from the mountains to the valley to hibernate before the monsoon season ends. “They’ll migrate into Phoenix, where they’ll then head onto people’s backyards,” he said. “Sometimes there will be groups of them that go across streets.”

But while these caterpillars might not be everyone’s cup of tea, they’re not dangerous. If anything, there’s a benefit to having them where you live. “If you’re looking to have your weeds mowed down they can definitely do a number on your weeds if they stay long enough in your yard to do that,” Kellogg said.

These caterpillars won’t chew through any of your clothes or food, including grains, that might be in the pantry. Instead, Kellogg says they feed off the desert’s natural vegetation, and any caterpillars that end up inside a home or in a pool do so on accident.

“They don’t really want to be in your house at all,” he said. “If they do end up in your house, just send them right back outside. You’ll be happier, they’ll be happier. They’re not going to try and come back in at that point.”

Kellogg doesn’t think calling an exterminator is necessary, especially when the caterpillars will only be visible for another week. “Just be patient because they’re not looking to hang around where you’re at,” he said. “They’re actually looking to get to where they want to go. As soon as September rolls around, they’ll probably be basically gone from everywhere.”

Kellogg says they will disappear underground in a few weeks, turning into a pupa, before eventually transforming into those white lion sphinx moths sometime next year.