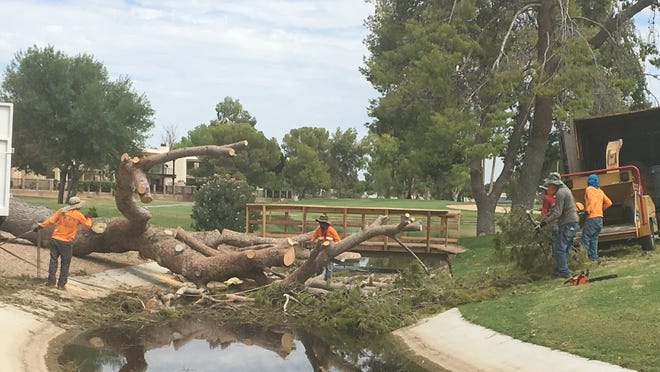 When should you trim trees in Phoenix? Advice from an arborist

While there haven’t been any major monsoon storms since the season officially began June 15, the threat of storms persists this week and all through the summer, according to the National Weather Service in Phoenix.

You may be wondering whether it’s a good idea to trim your trees in anticipation of wind and lightning. We talked to LoriAnne Barnett Warren, an urban forestry specialist and certified arborist with the Arizona Department of Forestry and Fire Management to find out her advice for homeowners.

Trees that will better weather the storms are the ones that have been cared for year-round, Barnett Warren said.

“Trees are like pets or family members. They need to be nurtured to thrive because they are living things and can’t just be planted and forgotten. Even the natives need care year-round in our harsh urban environments,” Barnett Warren said.

Tree-care tips for Phoenix from an arborist

Question: Should people get their trees trimmed in anticipation of the monsoon?

answer: Not necessarily, unless they have been neglected during the rest of the year. I would definitely not recommend pruning just because it is monsoon season, without considering why you are pruning.

More often than not, trees don’t need pruning, and if you are pruning to get a tree to fit into a space, then it’s not been properly planted in the right location.

Pruning takes away the living tissue, which is what the tree needs to produce food. Taking out a lot of branches in the summer also risks the tree being exposed to sun scald or sunburn.

But, if trees have not been maintained over the years, have uneven canopies due to improper pruning in the past or have crossing branches, you might want to carefully prune out some of the canopy … being careful not to take out more than 25 % of the canopy cover.

Q: When is the most important time for tree maintenance, and why?

A: Pruning trees when they are young, ie, trees that are small and have been put in the ground recently, maybe a year after it’s been established, is a good idea. You will set it up for success then.

But if you’ve inherited an older tree, as many people do, taking care of it as soon as you can is important. If there are dead branches in an older tree, caused by stress, then you’d consider pruning them out for sure. If there are large trees, I’d recommend hiring a certified arborist to come and do the work because they are licensed and trained in tree climbing, care and maintenance.

Having them come out sometime before June to assess and schedule work would be good. This can be a busy time of year for them.

Forecast:‘Normal to above normal rain’ expected for Arizona monsoon season in 2022

Q: What are some pruning guidelines people should know?

A: In general, if you are talking about low desert trees in Phoenix you can prune them successfully year round. In other locations and other types of trees (northern Arizona) you’d want to prune when the tree is dormant in winter, for deciduous and conifer trees.

As a rule of thumb, you should never remove more than 25% of the branches and canopy in any given year. It will damage the tree because it takes out too much of the living tissue.

Pruning should be done early in the tree’s life for better results later, and if you find an older tree needs lots of trimming, then it may not be the best suited for the space and environment after all.

Q: Is any particular tree maintenance or preparation recommended at this time of year?

A: Again, trees should have been set up for success before now, but some other things to consider include monitoring rainfall amounts received and adjusting watering schedules accordingly to conserve water and not give the trees too much water during this rainy season.

Q: What common trees in metro Phoenix are particularly susceptible to storm damage?

A: Any tree that is exhibiting stress. Trees with dead and dying limbs, brown needles and leaves, and dropped leaves would be susceptible to storm damage.

Species such as those large Aleppo pines that are suffering from our extreme drought may lose dead branches with high winds. Mesquites and paloverde trees also tend to topple, even if healthy, given strong winds because they have shallow root systems by design — so they can soak up surface water when it arrives.

Trees in open spaces, like golf courses, also may be more subject to wind damage and lightning strikes.

A: Trees like desert ironwood are a good choice. And native trees that maintain their natural form — like desert willows, paloverde and mesquite that actually grow in a shrubby form when not limbed up for human navigation around them in a park — tend to be more stable.

Non-natives can be OK but may be more subject to stress, like the elm or ash trees, so those might be more susceptible to damage if their health is not good going into monsoon season. That’s not a reason to avoid the non-natives. Some do well if they are cared for throughout the year.

Q: What should owners of palm trees know?

A: Palms are definitely something that should be maintained because the flower stalks — or inflorescences, as they are technically called — can become a hazard. Most of the species we have, Mexican and California fan palms, put out stalks in late April through June. Those can dry out and become a hazard.

The skirts (the dead remains of fronds that have fallen or been trimmed) attached to the tree are also very heavy and can injure people if they are in highly trafficked areas and they blow down in a storm. However, keeping skirts on the trees that are not in direct contact with people can benefit birds and other wildlife because they are good habitat.

I would recommend a certified arborist for pruning palms because it is very dangerous and pruning too much can cause the palm to die. Palms are actually more related to grasses than trees — they are monocots and have a totally different root system.

Q: What are the benefits of keeping trees well maintained?

A: The benefits of keeping them maintained are they will be more likely to remain stable during the monsoon storms. Healthy trees also provide shade, reduce cooling costs for buildings and heating in the winter, and curb greenhouse gas production.

These articles will give you more information on how to care for your yard.