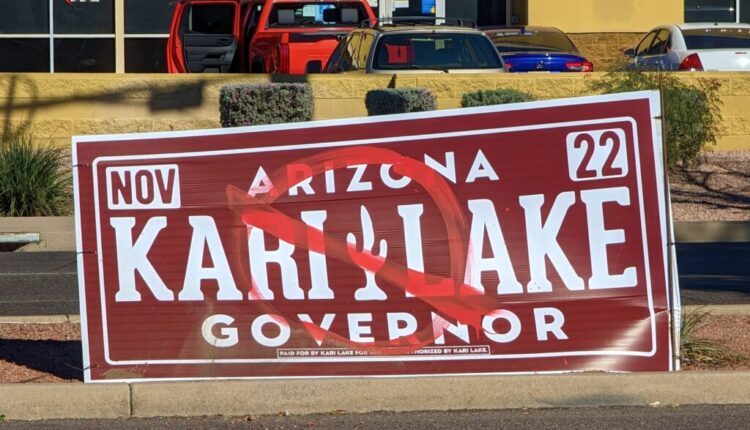 Kari Lake performed historically badly in her bid to be governor. And there’s no debate about why she and her merry band of MAGA extremists lost all of the top statewide races this year: Republican voters abandoned them.

Not that they could ever admit that, of course, as Lake and her allies have spent the weeks since she lost diving headlong into fanciful and evidence-free claims that the election was rigged against them.

And it’s not all Republican voters who couldn’t stomach the intentional demolition of faith in American elections, obviously. The GOP remains firmly under the thumb of former President Donald Trump, and the vast majority of its voters remain enthralled by the reality-TV-star-turned-politician and his incessant, delusional blathering about stolen elections.

But data published about the recently certified election makes clear that a significant number of GOP voters rejected the Republicans at the top of the ticket.

The political climate couldn’t have been better for Lake and Blake Masters and Mark Finchem and Abe Hamadeh. Midterm elections are historically great for the party out of power in D.C., and with surging inflation and an unpopular Democratic president, Republicans were predicting not just a “red wave,” but a “red tsunami” that would “break the establishment.”

Republican enthusiasm was strong in the election. In Maricopa County, where about two in every three Arizona voters live, more than 75% of registered Republicans cast a ballot, outpacing Democrats (69%) and independents (49%).

Critically, overall turnout in Maricopa heavily favored the GOP. More than 40% of voters were Republicans, about 8.3 percentage points more than Democrats — slightly better than the eight-point edge that reputable polling predicted.

It’s a massive loss, and it’s strictly due to campaign malpractice. The Republicans should have swept.

And yet, Lake lost 315 precincts that voted for Doug Ducey in 2018, when he easily secured reelection over David Garcia. Between Maricopa and Pima counties, where some 80% of Arizona voters live, 295 precincts flipped from R to D in the governor’s race.

At the same time, Kimberly Yee secured reelection as treasurer by more than 280,000 votes, an 11 percentage point margin over her Democratic opponent. And Republicans picked up competitive congressional seats in Phoenix and Tucson.

You don’t have to crunch the data too hard to understand that Lake’s loss wasn’t because of fraud or the hacking of machines, as she desperately wants people to believe. It’s because her message about pervasive election fraud and fealty to Trump — also the central message of the Masters, Finchem and Hamadeh campaigns — drove Republican and conservative-leaning independents away from her by the thousands.

By contrast, Yee didn’t cozy up to Trump — or to Lake, Masters, Finchem and Hamadeh, for that matter. Neither did U.S. Rep. David Schweikert, who narrowly won reelection, or Juan Ciscomani, who was elected to Congress in a tight race in Tucson.

One look at the map of the precincts in Maricopa County shows clearly what happened in Lake’s race: The ones that flipped are primarily in north Phoenix and Chandler, two areas that have historically been Republican strongholds but are increasingly becoming purple.

None of that surprised Ryan Smith, a lifelong Republican and former political consultant from Mesa who voted for Hobbs. Lake ultimately faltered, he said, because her focus on feeding red meat to the die-hard, Trump-loving GOP base turned off Republicans like himself who want to move away from the Trump era.

The result, he said, was that some of those voters cast a ballot for Hobbs, while others skipped voting in the contest altogether. Election data shows there were roughly 32,000 voters who didn’t vote for governor, nearly twice the margin that Lake lost by.

“That combination, in small-margin races, is the kiss of death,” Smith said.

We might be a conservative state, but we’re not a Trumpy state.

“We might be a conservative state, but we’re not a Trumpy state,” she said, noting that this is the third straight election in which Trump-backed statewide candidates have lost.

Yee’s victory is indicative of what the state’s red wave ought to have looked like, had there been better candidates at the top of the ticket, said Tyler Montague, a lifelong Republican who has spent more than a decade in the intraparty fight between the GOP’s increasingly more powerful right wing and the more moderate business-centric wing.

“It’s a massive loss, and it’s strictly due to campaign malpractice,” he said. “The Republicans should have swept.”

Lake’s campaign rhetoric, Montague said, was particularly damaging — especially in the campaign’s closing weeks, when she repeatedly shared a stage with convicted felon Steve Bannon and told voters who liked the late John McCain to “get the hell out” of a rally.

Led by Lake, none of the Republicans who lost their statewide races seemed to recognize — or care — that they needed to shift their rhetoric in a general election to win votes from people who didn’t vote in the primary.

That led to a campaign focused on personal and political grievances. While that might fire up the base, it wasn’t the base that was ever going to deliver a statewide victory.

“You can’t own the libs into the Governor’s Office. Or into the Secretary of State’s Office. Or the Attorney General’s Office, thank God,” Petsas said.