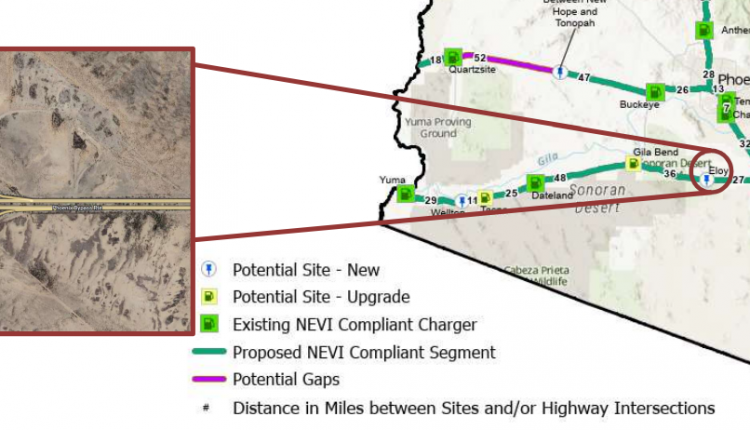 In Part 1, I covered some basic information about charging station locations in Arizona and talked about the challenges the state’s facing in locations stations along I-10. Now, I’m going to finish up discussing the other interstate corridors and what we can probably expect to see in the next couple of years.

Interstate 8 is going to be relatively simple for ADOT to plan along its route, but there will be one challenging segment.

Yuma already has a compliant station (Electrify America), but there’s a big gap between that and Dateland. They’ve got an option to upgrade a station at Tacna (another Tesla Supercharger) to have CCS plugs available. Or, the state may add a station at Wellton. So, filling that gap isn’t going to require any extraordinary methods.

Adding a station at Gila Bend (several places to choose from) would be another 48 miles, and that’s perfect, but Gila Bend to Casa Grande is going to be a problem, as that gap has basically nothing in it and it’s over 50 miles. ADOT chose an exit that could work, but there’s nothing there. In this case, the state is going to either need to apply for a waiver or do something to build a complete station in the area. So, expect either nothing to happen at that exit, or expect ADOT to attract a private business to host the site there.

Coming from California, there’s a station at Kingman that meets federal requirements, but that’s more than 50 miles from the state line.

There is a truck stop at the Yucca exit, so the red circle must mean they don’t think there’s enough power in the area. So, ADOT is probably going to need to allocate some of the funding to adding power to the grid in that area, adding storage, or both battery+solar. Whether they do that or apply for a waiver is still up in the air.

The next segment is going to be challenging with fewer options. There’s a 70-mile stretch from Kingman to Seligman (where the next station will have to go). My guess is that ADOT applies to a waiver here, but it’s possible that they choose to create a special station along the route that runs on solar and storage. As I’ve pointed out in other articles, this could be a viable option if pricing is done such that the special limited-service station is only used by people who really need it. Getting a private partner for this seems unlikely, though. The next stretch of road with charging gaps is I-40 from Flagstaff to the New Mexico line. Fortunately, they have better options in this area. The Twin Arrows Casino splits the difference between Flagstaff and Winslow pretty well, but there’s the possibility of using Meteor Crater as an alternate partner if the Navajo Nation doesn’t want to do it. The town of Holbrook has a number of businesses, and they also have a Tesla Supercharger that makes for a good candidate for upgrade/addition of CCS Plugs.

The next stretch of road between there and Gallup, New Mexico (the next Electrify America station) has plenty of good options. I like that they’re thinking of partnering with the Petrified Forest National Park, as that would make it easier for EV drivers to confidently drive around the park (which goes quite a ways south) and then charge again before jumping on the highway as needed . For people not visiting the park, it’s also got restrooms and food just outside the park gate.

My Nissan LEAF out in nature at the Painted Desert in the Petrified Forest National Park. Getting there in 2019 was a royal pain in the ass.

Putting a station at Chetco (next to Sanders, Arizona) splits the difference between the Petrified Forest and Gallup nicely, leaving only 42 miles. So, that seems to be the most likely place to put it. The time I drove my 2018 LEAF out of Phoenix toward Flagstaff, it almost didn’t make it. The steep hill heated up the battery, and it was reducing power by the time we reached Cordes Junction. We stayed the night at an RV park that had a few hotel rooms, and we charged the car up while we slept to make it the rest of the way to Flagstaff the next day.

I was glad to see that ADOT chose Cordes Junction as a place to add a rapid charger. It won’t help EVs that lack liquid cooling, but for everyone else who didn’t buy junk like I did, it’s a good place to get a charge after that crazy climb. There’s already a Tesla supercharger there, which may be a good place to upgrade or colocate.

There’s still another appreciable climb before Flagstaff, but they’re looking at adding stations at Camp Verde and Munds Park, which would make it possible for just about any EV to get from Phoenix to Flagstaff. Another corridor they’re planning on is Interstate 19, the only interstate highway with metric signs. Their map says there’s an upgradable station in Nogales, but I can’t find anything about fast charging in the area. But, if they upgraded a Level 2 station to host a Level 3 station with four stalls, and then add a station or two between Tucson and Nogales, it should be no big deal. They’ve already identified several possible areas with good services, amenities, and power.

A Highway That Barely Touches Arizona

One last highway that they put on the map but don’t mention stations for is I-15. It cuts across the very northwest corner of the state, only spending 29 miles in Arizona. Coming from Utah, about half of the drive is a rugged canyon, followed by a very small town and then a flat area until the Nevada line. The drive from St. George, Utah, to Mesquite, Nevada, is only a total of 39 miles. There are Electrify America stations in both towns that meet federal requirements, and they’re 44 miles apart.

So, there’s not really a reason for Arizona to bother with adding a station at the small town of Littlefield right now. The town should definitely get one someday, but EV drivers in the area already have better access to charging than people in many other parts of Arizona.

Featured image and other screenshots by ADOT.

Have a tip for CleanTechnica, want to advertise, or want to suggest a guest for our CleanTech Talk podcast? Contact us here. advertisement