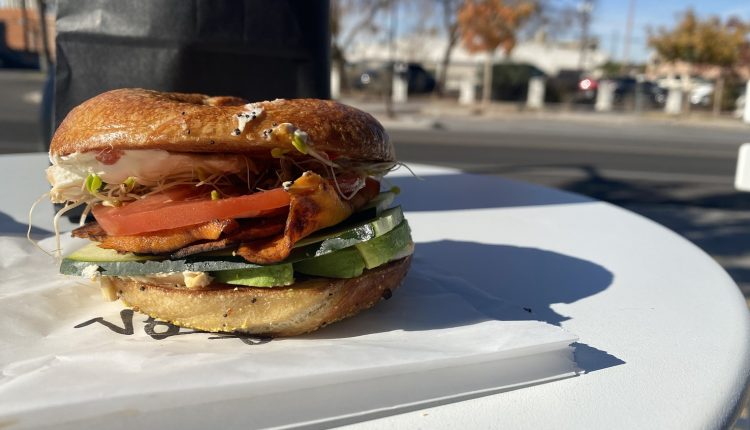 Many Jewish folks choose to break the sundown to sun up Yom Kippur annual fast with a hearty spread of bagels accompanied by sides and toppings such as tuna salad, whitefish salad, eggs, smoked salmon, various cream cheese, and a good cup of coffee.

For those living in metro Phoenix, finding good bagels is a source of frustration as well as heated debate in the Valley, especially among New York transplants. Some people protest that the water just isn’t right for baking conditions, but we disagree.

Whether looking to break the fast or just satisfy breakfast cravings for a fully-loaded bagel, here are six bakeries and delis to visit for the best locally-made bagels in the Valley.

Get some bagels and beyond at New York Bagels ‘N Bialys.

Multiple Locations NYBB for short, New York Bagels ‘N Bialys has several locations in Scottsdale, including a brand new one in the Village Plaza, and offers a great selection of both bagels and bialys for that East Coast-meets-West Coast flavor. Bialys are not as common in the Valley and NYBB has an excellent selection. The Polish-Jewish flat-looking bagel is a great choice for a smaller, lighter version of the breakfast item. The best part of a bialy is the deeper middle groove that isn’t punched through like a bagel but instead filled with toppings like onion filling. Order an Egg-A-Bagel, a bagel or bialy with egg, bacon, ham, or sausage and cheese for $7.99 or an Egg-A-Bagel-Pileup with all the meats plus a potato pancake and Hollandaise sauce for $14.99. A dozen bagels or bialys to go are $19.17, and gluten-free bagels are available for $3.99 each. Check out the menu for more Yom Kippur-friendly options such as the fish plate, traditional bagel with lox, and assorted tubs of cream cheese to enjoy with the family.

16895 North 29th Ave
602-942-7786 Established in 1995, Bagel Gourmet is a great option for coffee and bagels. Get a taste of fall with pumpkin-flavored bagels paired with Pumpkin Spice lattes. Other exciting offerings include the Cinnsational cinnamon flavored bagel with a sugar crust, the jalapeno cheddar flavored bagel, blueberry cream cheese, and lox cream cheese. The Nova Lox special comes with the customer’s choice of bagel and cream cheese topped with capers, cucumbers, tomatoes, onion, and smoked salmon for $9.90. Bagel Gourmet also offers a half dozen special with six bagels and a tub of cream cheese for $12.20.

K May Donuts and Bagels

8495 Grand Ave, Peoria
623-979-0040 This modest-looking donut and bagel shop is locally owned and much loved in the Peoria area. Stop by K-May Donuts and Bagels for favorites including a bagel sandwich with egg, ham, and cheese for $3.99 or one of many donut choices including seasonal flavors. The small store also offers an extensive coffee menu to enjoy with a breakfast or lunch bagel. K-May’s opens early at 5 am, so it’s a great option for early risers or commuters.

The yam and cheese, money shot, and everything bagel with cream cheese wait to be devoured.

901 First Street The most trendy option on the list, Stoop Kid is a unique restaurant with slinging burgers, bagels, and coffee with a Brooklyn spin. Many of Stoop Kid’s bagel sandwiches have creative ingredients and names such as the Money Shot which has bacon jam, cream cheese, marinated tomato, Tillamook cheddar, scrambled egg, and a hash brown cake on an asiago bagel for $10. Megan Thee Stallion fans or those that like a good food pun can try the Egg the Scallion with scallion and parmesan cream cheese, a soft egg, honey ham, and Gruyere and Mornay cheese sauce on an Asiago bagel for $12. A bit more adventurous than some of the other bagel spots in the valley, Stoop Kid has fully stacked portions and fresh takes on non-basic bagels. They do offer simple bagel and cream cheese options for the less adventurous, or less hungry, for $4.

Multiple Locations Open every day and offering a wide assortment of bagels, cream cheeses, cold sandwiches, and breakfast options, Hot Bagels & Deli has that East Coast feel and is super reliable for delicious bagels. Hot Bagels consistently has harder-to-find egg bagels and fresh strawberry cream cheese, a great combo, by the way, for $4.75. Get classic bacon, egg, and cheese on any bagel for $8.99. A traditional Nova Lox with cream cheese, tomatoes, onion, capers, and smoked salmon on a bagel is $13.99. Hot Bagels also offers an extensive catering menu. Bagel flavors include garlic, poppy, wheat, rye, salt, blueberry, cinnamon, spinach, chocolate chip, and everything. Homemade cream cheese offerings include walnut-raisin, blueberry, strawberry, lox, veggie, and jalapeno for $10.99 by the pound.

Many people eat bagels and cream cheese to mark the end of Yom Kippur.

Multiple Locations Although Chompie’s is more of a large-scale diner than a typical deli, the restaurant has a reliable East Coast-style selection of bagels and spreads. Try the delicious Cragel, a croissant bagel hybrid, with scrambled egg, bacon, onion, and cheese for $12.79. The bagels and bialys with flavored cream cheeses are $3.99 each or $4.99 for the lox-based cream cheese. Chompie’s offers a Keto-friendly bagel option for an extra $1.50 and a gluten-free roll or bagel for an extra $1.49. The cinnamon raisin, cinnamon crunch, egg, blueberry, and cheddar jalapeno bagels are some of our favorite flavors. Feel like drinking or celebrating with a cocktail? Add on a bloody mary for $10 or share a mimosa flight for $15.