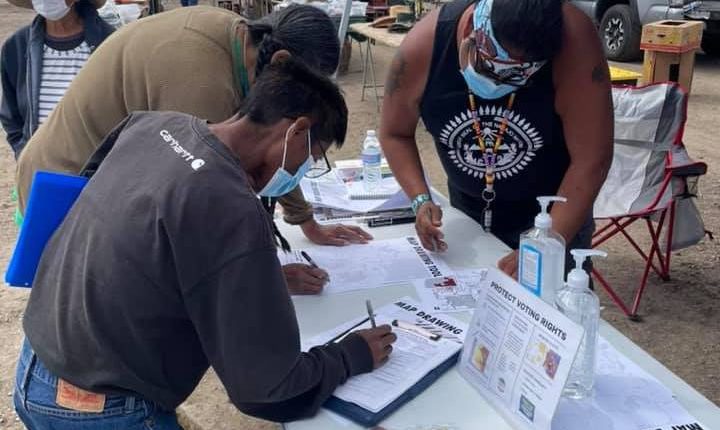 Native Americans face recurring and unnecessary barriers when it comes to exercising their right to vote, according to a report released by the White House.

“Many of the voting barriers faced by Native American communities are persistent and longstanding, with deep historical roots,” the report states.

And those conditions were only exacerbated by the COVID-19 pandemic.

“Many of these represented longstanding barriers or difficulties, all too familiar to many voters and advocates,” the report concluded. “They can and should be mitigated and eliminated wherever possible, to ensure that the promise of democracy is equitably available to all.”

The report was conducted as part of an Executive Order on Promoting Access to Voting that President Joe Biden issued in March 2021. The order had a provision to create a study group to study the barriers that Indigenous voters face when casting their ballots.

The Interagency Steering Group on Native American Voting Rights released their report in March that revealed the recurring, unnecessary, and unacceptable burdens that face Native workers. The group also provided recommendations to mitigate or eliminate these barriers.

The group compiled information for the report by meeting with tribal leaders and Native Americans across the country. It also engaged in listening sessions with Native Hawaiians, organizations advocating for improved tribal voting rights, and state and local election officials in jurisdictions with sizable Indigenous populations.

The report also identified barriers specific to electoral practices that impact Native voters, including barriers in receiving information about the voting process, redistricting, voter registration, voter identification, access to voting in person and access to voting by mail.

“The Steering Group heard, repeatedly, that Native American communities faced unnecessary barriers in each part of the process, which non-Native voters did not face. And these barriers add up to decreased faith in democracy,” the report found.

Native voting rights advocates praised the report, saying it is needed to help non-Natives understand the barriers that Indigenous people face when it comes to voting.

“It’s nice that this is part of that larger policy and education process, which I think is really an important part to try and get people excited or informed about,” she said.

Parrish, who is Navajo, said Indigenous people facing voting barriers is a generational thing, and it is heartbreaking because it seems that new layers get added every year that have a lasting impact on tribal communities.

“It feels like steps back with what we have to come against, but we also know that we’re not new to this,” she added. “It comes back to the same goal of making sure that we’re heard and that our voices are genuinely taken into consideration in our government.”

For instance, the report recommends that federal and state policymakers pass legislation that protects voting rights but also incorporates and builds upon the protections in the Native American Voting Rights Act.

As part of the inclusion and communication recommendation, the report states that federal, state, and local policymakers should institutionalize engagement of tribal leaders and Native communities through representation on task forces or similar bodies so that Native voices are part of the decision-making process.

The Native American Rights Fund (NARF), which issued a report in 2020 chronicling barriers to political participation for Indigenous people, praised the Biden administration for its examination of the issue.

“We commend the Biden administration for doing the hard and necessary work of investigating, documenting, and confirming what NARF has long said: it is too hard for Native Americans to vote,” NARF attorney Jacqueline De León said in a statement.

“We look forward to implementing the excellent recommendations made by this report, including passing the Native American Voting Rights Act, turning federal agencies that service Native Americans into National Voter Registration Act sites, and increasing addressing and mail delivery to rural Native Americans,” she added.

NARF said the White House report confirms a lot of the findings from their report, which includes that Indigenous peoples face unreasonable barriers when exercising their right to vote.

“It is a strong first step in ensuring that Native American voters have equal access to the vote,” the organization said in a news release. “NARF is proud to be part of this essential process that will help strengthen our democratic processes and begin to address a long history of discrimination and disenfranchisement at the polls.”

As part of the release of the White Houses report, the Department of the Interior announced in March that it will start working with states to formally designate two post-secondary Tribal institutions as voter registration agencies under the National Voter Registration Act.

The institutions will be Haskell Indian Nations University in Kansas and the Southwestern Indian Polytechnic Institute (SIPI) in New Mexico, and the designation will facilitate voter registration opportunities for enrolled students and members of the community.

“Tribal nations have played a significant role in influencing the contours of American democracy, yet systemic barriers continue to disenfranchise Indigenous people and impede a free and fair electoral process,” Interior Secretary Deb Haaland said in a press release. “The Interior Department is committed to defending the right to vote, which includes increasing access to voter registration and engaging young people in our democratic system.”

“Haskell and SIPI serve as important touchpoints in their respective communities,” he added. “Designating these schools as voter registration agencies is an important move that will allow more Native people the opportunity to register to vote.”

Navajo homes are finally getting hooked to power grid