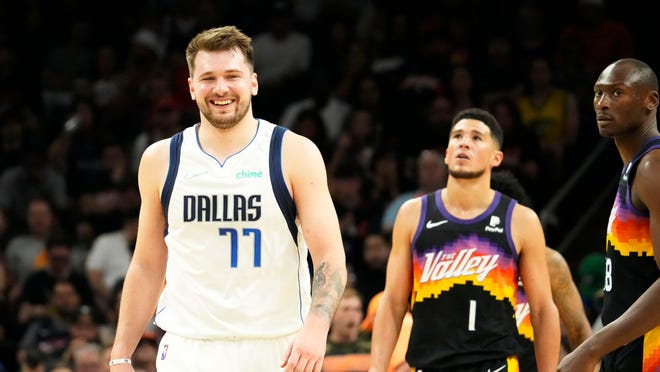 Who should the Phoenix Suns look to trade after Game 7 collapse?

A team usually does two things after a special season ends in disaster like Phoenix’s did in Sunday’s Game 7 of the Western Conference semifinals against Dallas.

Stay pat for the most part in believing they can make another run at a championship or make major moves.

Impossible to do both. So who could they trade?

On ESPN’s First Take on Monday morning, JJ Redick said Deandre Ayton is the one player on the roster the Suns could ‘do a sign-and-trade’ as Phoenix didn’t offer him the rookie max extension going into the 2021-22 season .

The Suns may believe they can live with a big man doing primarily pick-and-roll and don’t need to pay someone the max do to that job.

Trading Ayton may lead to them getting a wing player in return who can score as Devin Booker and Chris Paul are the only two who can score off the bounce.

Cameron Payne is tradeable after the way he performed in the playoffs after a down year, as is Landry Shamet, who has a very tradeable contract he signed that kicks in next season (four years, $43 million).

hot topic: Where will Ayton stand with Suns after Game 7 loss to Mavericks?

Dario Saric is expected to be ready come next season after missing the entire 2021-22 season with a torn right ACL suffered in Game 1 of the 2021 finals.

He’ll be an unrestricted free agent in Summer 2023. The latest procedure on his right meniscus wasn’t a major one.

Saric has continued his rehab without a hitch. So he may be someone the Suns look to move before the trade deadline.

Bigs JaVale McGee and Bismack Biyombo just finished one-year deals. They could bring one of them back on a one-year deal next season.

Booker is going to command a huge contract as he’ll be eligible for a supermax if he makes All-NBA this season. He’s almost a lock to make All-NBA.

So the Suns have to take that into account for future moves.

Cam Johnson is up for a rookie extension heading into his fourth NBA season.

He’s the best shooter on the team and could start next season as a starter as he’s a better offensive player than Jae Crowder, who is entering the final year of the three-year deal he signed before the 2020-21 season.

Crowder will be an unrestricted free agent after next season. He’s come off the bench before, but the Suns have a decision to make on him, too.

Then there’s Paul, who signed a four-year, $120-million deal going into this season. The third year is partially guaranteed while the fourth is non-guaranteed.

At age 37, Paul is on the downside of his career. With the way he ended the playoffs, Phoenix should be looking at a replacement, such as Grizzlies backup point guard Tyus Jones, who is an unrestricted free agent this summer.

All-Star Ja Morant has the point guard position on lock for Memphis. Jones could play behind Paul a season and then be ready to start in 2023-24.

Tracksters get busy as state is nearly here – Yuma Pioneer