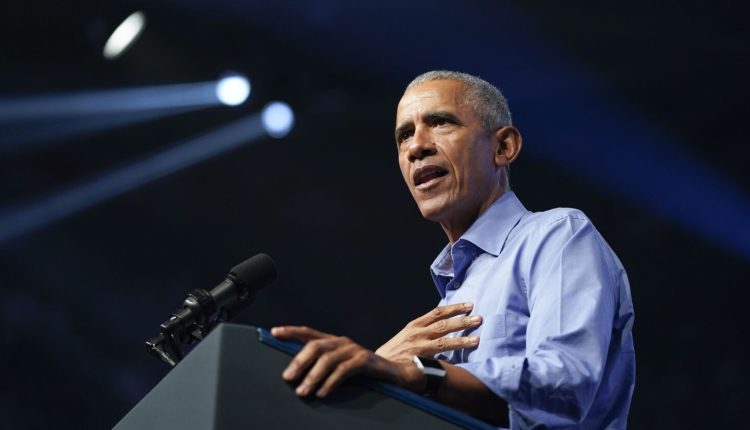 While campaigning for Democrats at a rally in Phoenix on Nov. 2, former President Barack Obama addressed rumors that he is part of a group interested in buying the Phoenix Suns.

“It’s good to be back in Arizona,” he said, per Fox 10 Phoenix. “I wanted to come out here, not only because it’s sunny and warm, but also, you know, there have been these rumors about me and the Phoenix Suns.”

The former president claimed he hadn’t been looking into purchasing the team, but he didn’t shut down the possibility of joining an ownership group in the future.

“I didn’t know I was in the market, and by the way neither did Michelle, but I will say this, the Suns are looking pretty good,” he said. “I gotta admit that. I think they have a few more wins than my Bulls right now.”

How did the Obama rumor start?

The rumor that Obama would purchase the NBA team started when former Suns player Charles Barkley joined “The Bill Simmons Podcast” on Oct. 25 and discussed who will buy the NBA franchise.

“I’m probably breaking some news here, but I heard Obama’s involved in one of the groups,” Simmons said. “And that’s the one guy that I feel like they would make him the actual face (of the group), and the money guys would be so happy.”

The former president’s involvement would be enough for Barkley to consider joining an ownership group with him.

“If Obama called me, hell yeah I’m buying in,” Barkley said. “I got so much love and admiration for that guy.”

Unfortunately for Barkley, the rumor is apparently unfounded.

Who else is rumored to be interested in buying the team?

Forbes valued the Suns at $1.8 billion last year but recently reported that the franchise could sell for $2.5 billion.

But Bezos may be out of the running now. With Washington Commanders owner Dan Snyder hiring Bank of America to explore the sale of his NFL team, the Amazon CEO is supposedly interested in buying the Commanders, The Washington Post reported.

Why are the suns for sale?

On Sept. 21, Suns majority owner Robert Sarver announced he was starting the process of selling the team and the WNBA’s Phoenix Mercury.

The announcement came in the wake of his one-year suspension and $10 million fine after the NBA’s investigation found Sarver guilty of using conduct that “clearly violated common workplace standards, as reflected in team and league rules and policies,” according to ESPN.

“I do not want to be a distraction to these two teams and the fine people who work so hard to bring the joy and excitement of basketball to fans around the world,” he said in a statement, per ESPN. “I want what’s best for these two organizations, the players, the employees, the fans, the community, my fellow owners, the NBA and the WNBA. This is the best course of action for everyone.

PayPal, one of the team’s sponsors, threatened to terminate its sponsorship of the team if Sarver returned to his ownership role after completing his suspension, ESPN reported.