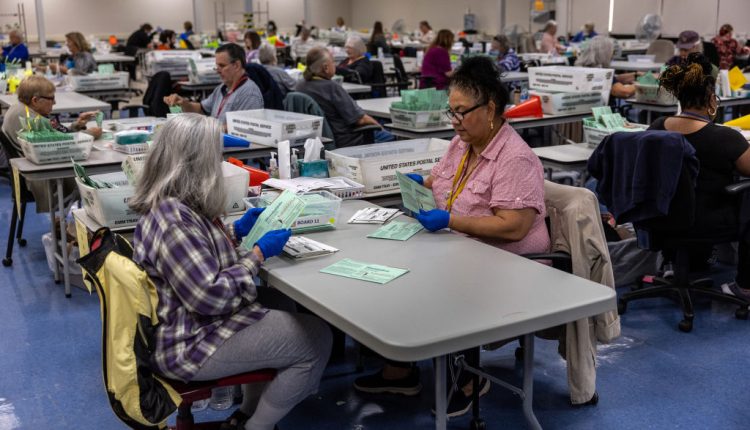 Why can’t Arizona be more like Florida? In the last few days, this has become a common refrain.

Florida had posted the vast majority of election results by the end of the night on Election Day. But on Thursday afternoon, Arizona still had a substantial quantity of ballots outstanding. Maricopa County, where more than half of voters live, was estimating it still had 26% of ballots to count

On “The Charlie Kirk Show,” gubernatorial candidate Kari Lake said that the state was intentionally delaying the results to “pour cold water on this movement.” To which her opponent, Secretary of State Katie Hobbs, tweeted that the speed at which results were coming in was “exactly what we expected.”

Here we have two swing states, with widespread mail-in voting, and similar laws. So, why is Florida so much faster?

The main difference: Florida doesn’t have an avalanche of mail ballots on Election Day. The state doesn’t allow mail voters to drop off their ballots anywhere but the county elections office on Tuesday.

Arizona does, and Maricopa County voters took advantage of late voting this year more than ever before. The county received 290,000 mail-in ballots on Election Day, according to County Supervisors Chairman Bill Gates, the most ever, and a 70% increase from 2020’s general election. That includes mail-in ballots sent in the mail, or dropped off at a vote center or drop box.

The voter signatures on the envelopes of those mail-in ballots take time for county workers to verify.

Florida is already done verifying those signatures before Election Day. Mark Earley, supervisor of elections in Leon County, Florida, explains it like this: “By election morning, we have processed roughly 95% of our (mail-in ballots), tabulated them, and the results are sitting there waiting to be uploaded into our election management system, and compiled and released promptly after 7 p.m. on election night.”

Florida also has no choice but to count quickly. Florida law requires, with some exceptions, counties to finish counting early ballots by 7 p.m. the day before the Election Day, and requires those results to be posted within 30 minutes of polls closing.

There is also one major difference in how Florida counties process mail-in ballots. Florida counties have in-house scanners that process the ballot envelopes. Maricopa County does not. Election workers must pack the ballots up to be sent in their original envelopes to a separate facility in Phoenix, owned by Runbeck Election Services, to be scanned.

This transfer of ballots takes a long time. Richer tweeted that it took his team five hours, from midnight on Election Day to 5 a.m. Wednesday, to prepare the 290,000 mail-in ballot envelopes to send to Runbeck to have them scanned. The scanning process there also takes time. Votebeat reporter Jen Fifield’s ballot, dropped off at a vote center on Election Day, wasn’t scanned — indicating it was officially received — until 6:11 p.m. Wednesday, according to a text from the county’s ballot tracking system.

After scanning, Runbeck sends the ballots back to the county and signature verification can begin. Richer tweeted that the county had started verifying signatures by 7 a.m. Wednesday on the Election Day mail ballots they had received back. They come back in rounds from Runbeck, he said.

Gates defended the time it was taking the county to count ballots at a Thursday news conference. The county’s election workers are working long hours, he said.

“Quite frankly, it is offensive for Kari Lake to say that these people behind me are slow-rolling it when they are working 14 to 18 hours,” Gates said.

Richer said the county has made its signature verification process more rigorous, after getting concerns after 2020’s election that it was done too quickly.

But he also pointed out that it was normal to not know the results of tight races by now. He wasn’t certain he had won his race for county recorder in 2020 until the week after the election, he said.

His opponent at the time, Adrian Fontes, the former county recorder who is now running as the Democratic candidate for secretary of state, also defended Maricopa County’s process in a tweet on Thursday, saying that the county had been counting early ballots for over two weeks “because they’re careful and thorough.”

Richer tweeted that, as the number dropped off on Election Day grows, “we will likely want to have a policy conversation about which we value more: convenience of dropping off early ballot on election day or higher percentage of returns with 24 hours of Election Night.”

Asked if he thinks the state should change its laws, Richer said at the news conference Thursday that “it would have been nice” to get the mail-in ballots sooner.

When someone tweeted at him that Arizona “should take lessons from states that actually figured out how to do it efficiently and adjust their methods,” Richer said he agreed.

“We should take a good look at some of these laws and methods,” he wrote.

But Gates said Thursday he isn’t sure he would want to change the laws. He said there are positives to allowing voters to turn in their mail-in ballots so late. Like skipping lines on Election Day.