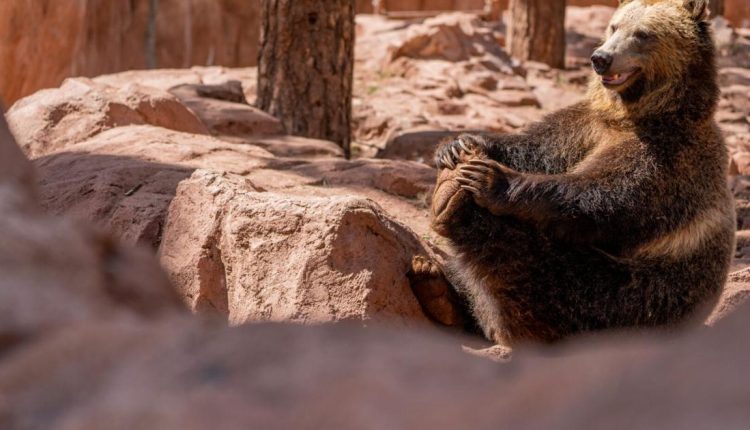 Why Fat Bear Week is more than a beauty contest

WILLIAMS — No one likes to get on the scale, but what if there was a reward for looking at the number? That’s the case for Crockett, a 2½-year-old grizzly bear at Bearizona Wildlife Park in Williams just west of Flagstaff.

Every week, this 460-pounder willingly steps on a scale the size of a wooden pallet, and gets salmon in return.

A fat bear is a healthy bear.

As winter approaches, bears prepare for hibernation, eating as much as they can before their long winter’s nap. The process is called hyperphagia, which happens in the fall months when bears eat and drink constantly to put on weight.

Fat bears not only are healthy, they’re fun to look at, too. From Oct. 9 to Oct. 16, Bearizona is having some fun as the bears pack on pounds by hosting Fat Bear Week on their social media channels to show off the park’s fattest female black bears. The idea came from Katmai National Park in Alaska.

“We work with so many bears and use it to show off our animals that we have at the park and at the same time educate guests about why it’s alright to be a fat bear,” said Dave O’Connell, director of animals at Bearizona . The park is home to many animals including black bears, grizzly bears, bighorn sheep, reindeer, white bison and javelinas.

Bears getting fat is important, O’Connell said, because “their whole year is based around getting food,” they need to build up enough fat reserves to make it through their six-month hibernation. Fat Bear Week puts the bears head-to-head in a bracket, giving viewers online the chance to vote for their favorite fat bear.

Katmai National Park, southwest of Anchorage, held Fat Bear Tuesday in 2014 to educate the public about the importance of bears to a healthy ecosystem. It was a success, so the park started Fat Bear Week in 2015. This year, Fat Bear Week began Wednesday and runs to Oct. 11.

People can vote for their favorite fat bear to win the competition using a March Madness style bracket. There’s no right or wrong way to choose a bear, but voting for the fat test of the fat is one approach.

The week is not only about voting for your favorite bear. Chris Kliesrath, an interpretive park ranger at Katmai, said the week allows the park to share more about what a healthy ecosystem looks like.

A fat bear, Kliesrath said, means the salmon run is healthy; bears get six months of food and nutrients they need from the fish to make it through hibernation. Most bears in Katmai hibernate from October or November to April.

Although the salmon and the bears in Katmai are healthy, Kliesrath said climate change is a concern.

“The salmon require a cooler temperature, so if the water starts to heat up, it could make spawning difficult,” Kliesrath said. “It’s not a good situation. If it starts to decline, then the bears are affected as well.”

Bears that come out of hibernation early don’t have the food that would be available to them later. Kliesrath said in Yellowstone National Park, bears have been observed emerging from their dens as early as February.

According to Climate Central, an organization of science researchers and communicators focused on climate change, fall temperatures in Flagstaff have increased 2.1 degrees since 1970.

In Arizona, increased overnight lows are the “most significant and noticeable” part of warming patterns, especially in Arizona, said Bianca Feldkircher of the Phoenix office of the National Weather Service.

“We can say confidently that overnight lows will probably just keep going up, too, especially like outer cities of the Phoenix metro,” Feldkircher said. “As those start to become more urbanized, too, we’ll probably start to see that warming trend start to occur in other places too. Not just in big cities in Arizona.”

Overnight lows are not the only change in Arizona. Trends show the state will have shorter winters and more days above 90 degrees, Feldkircher said, although it will vary from year to year.

“Those times are going to keep earlier and later, and in essence our winters will then be shorter, which is terrible,” Feldkircher said. “But luckily, that is not something that is going to happen every year.”

For Arizona black bears, this could impact natural hibernation cues. Bears wait for the right time to leave their winter dens, which could be when the spring snow starts to melt and food becomes more available.

“A lot of the time, that is cued off of the temperature,” O’Connell said. “In the wild, temperature change is a much bigger cue for hibernation than here at the park.”

“We also have to make sure that the bears that are going to sleep through winter are going to get fat enough,” O’Connell said. “Hyperphagia is an important time for us for managing the bears at the park.”

Although Bearizona makes sure the bears don’t get too fat, people can observe and vote for their favorite female fat bear on the park’s social media, which O’Connell said is the best way to get involved with Fat Bear Week.

“Since we stole Fat Bear Week from the National Park Katmai, the idea, because it was an amazing idea, check out their social media as well,” he said.