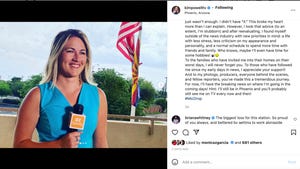 Powell, a reporter who joined Arizona’s Family in July 2018, said in Instagram posts on Saturday and Sunday, “After 10 years in TV news, I’m hanging up the microphone, the bold colored dresses, and hairspray.”

The decision was not easy, she says in the posts, and it sounds like it wasn’t her idea, at least not fully.

“Somewhere along the way, I was told to reevaluate my goals,” she says in the posts. “I just wasn’t enough. I didn’t have ‘it.’ This broke my heart more than I can explain.

“However, I took that advice (to an extent, I’m stubborn) and after reevaluating, I found myself outside of the news industry with new priorities in mind: a life with less stress, less criticism on my appearance and personality, and a normal schedule to spend more time with friends and family.”

Neither Powell nor representatives for Arizona’s Family responded to requests for comment.

Moving on:Kris Pickel, gone from Arizona’s Family: ‘I ought to get fired more often’

Powell’s departure is the latest of several for Arizona’s Family stations, Channels 3 and 5 in Phoenix, both owned by Atlanta-based Gray Television.

She came to Arizona’s Family from WINK in Fort Myers, Florida. She also worked in Midland, Texas, and in Las Vegas.

While in Midland in 2014, a video of her rapping “Alphabet Aerobics” by Blackalicious as her warm-up for a live shot went viral. The video has garnered more than a million views on YouTube.

Powell doesn’t say in her posts what she will do next, but she hints at it.

“For now, I’ll have the breaking news on where I’m going in the coming days!” she says. “Hint: I’ll still be in Phoenix and you’ll probably still see me on TV every now and then!”

Subscribe to azcentral.com today. What are you waiting for?