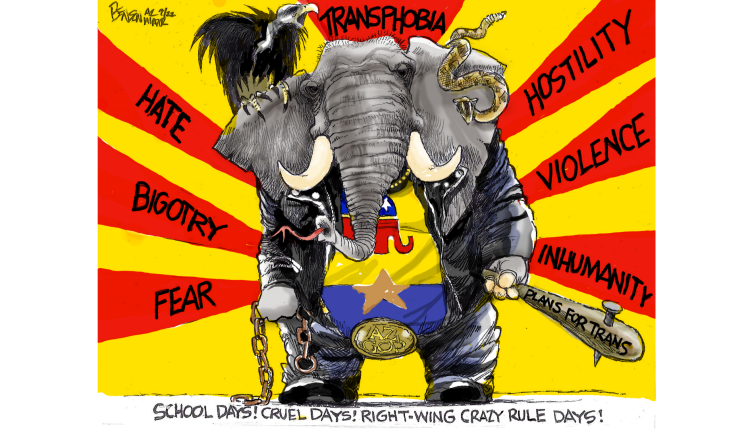 Tucson, with its heat and dryness that mitigate my chronic pain, proximity to the beaches of Mexico, diverse population, and year-round opportunities for hiking and mountain biking, is the perfect city to raise our two children. Yet, like many other families, my husband, Amit, and I plan to leave our dream home to protect our transgender daughter after the elections because of the Republicans’ focus on attacking transgender kids to rile up their base.

On the first day of this school year, we pulled out of the driveway shortly after 7 a.m. after some obligatory photos. Our eldest daughter began kindergarten, and our son began preschool. Amit had requested the morning off to celebrate this milestone and make the hour-long commute as a full family. Our daughter could attend the nearby school with bus transportation or even a short bike ride, but we make this long commute everyday because this school district is known to be the safest district for transgender students.

I feel defeated and, at the same time, grateful that my daughter can be safe at school.

Our family is not alone. Our friend Lizette has made the long commute to take her transgender son to this district for seven years. They left their previous school, which was just three minutes from their home, after her son repeatedly came home crying and expressing, “I’m afraid to die.” Lizette has pain in her hips from the drives, but she’ll tell everyone “it is so worth it.” Daniel transitioned at the new school in fourth grade with thoughtful support by teachers and a counselor.

Our friends Michelle and Andy, parents of a transgender daughter, desperately moved into the safe district when their Montessori school refused to support their daughter’s transition. Andy and all his siblings attended the Montessori school as kids. It is where his mother taught for 20 years and his father served on the board. The school had been a safe and magical place with only positive memories, which he had hoped to share with his daughter, but now he cannot.

My husband and I eagerly moved to Tucson to raise our two kids. In addition to having the financial security that I didn’t have as a child, we wanted to spend time with our kids outdoors and traveling together – things I never had as a child. My parents made $5 an hour when we arrived in the U.S., which meant they worked nonstop to make ends meet. We finally bought our dream house in Oro Valley, a suburb northwest of Tucson, within walking distance from the neighborhood school. I fantasized about our kids and their friends walking to our home for snacks, gossip, and homework.

When my daughter cannot safely use the bathrooms, cannot join a sports team, or cannot access life-saving medical treatments, she will become a fugitive, uprooted from safety, permanence, and security, running from state to state as her human rights change with every election.

What counts as quality to us changed when our daughter, who was assigned male at birth, began identifying as a girl. We began to listen to new stories, such as kids denying themselves of water because they felt unsafe going to the bathroom, teachers refusing to use correct pronouns and names, principals regarding parental support as immoral and dismissing bullying against transgender students.

In addition to hearing families’ testimonies, I spoke to an administrator at Amphitheater Public Schools about protections for our daughter’s basic rights. I received vague answers that emphasized that policy changes depend on who holds federal and state offices. Amit was troubled by the dismissal of the stories we’ve heard and worried about how conversative families might treat our daughter. “I just can’t get over the weight of the stories we’ve heard,” he told me.

The long commute to the new school became an easy choice: Our daughter could play sports, go to the bathrooms without fear, feel safe in the hallways and be called by her correct pronouns.

We share this ever changing and heart-breaking journey with many other families, whom we have come to depend on for encouragement and tips. We parents live with constant anxiety. In 2017, when the Trump administration withdrew Obama-era protections for transgender students in public schools that let them use bathrooms and facilities corresponding with their gender identity, Lizette and other parents of transgender children brought in flowers, banana nut bread and Starbucks gift cards to plead with the school to continue to support their children.

The threats against our children heighten every year. With some 300 proposed bills targeting the LGBTQ+ community according to the Human Right Campaign, 2022 is already on track to top 2021 as a record-breaking year for anti-trans legislation. This legislation restricts school curricula that deal with LGBTQ+ topics and religious exemption bills, bar or criminalize health care for our children, block access to the use of appropriate facilities like restrooms, prohibit our kids from fully participating in school and sports, and allow discrimination against them.

I know too well that there is a time to run. In 1995, my mother cupped my mouth in the middle of the night, and we fled to Ho Chi Minh City, then into the U.S. in darkness. Having been caught by Vietnamese officials in their first attempt to escape after the Vietnam War, my parents could not be too careful. We have all made plans – our family will go to California, Lizette’s family to Nevada, Michelle and Andy’s family to Massachusetts.

When my daughter cannot safely use the bathrooms, cannot join a sports team, or cannot access life-saving medical treatments – which it might with this November’s election – I will squeeze her hands and remind her to look back at the millions who cannot cross state lines like we can. Perhaps my daughter will become a fugitive, uprooted from safety, permanence, and security, running from state to state as her human rights change with every election.

Parades, ceremonies, memorials in the Metro-Phoenix area in the Valley