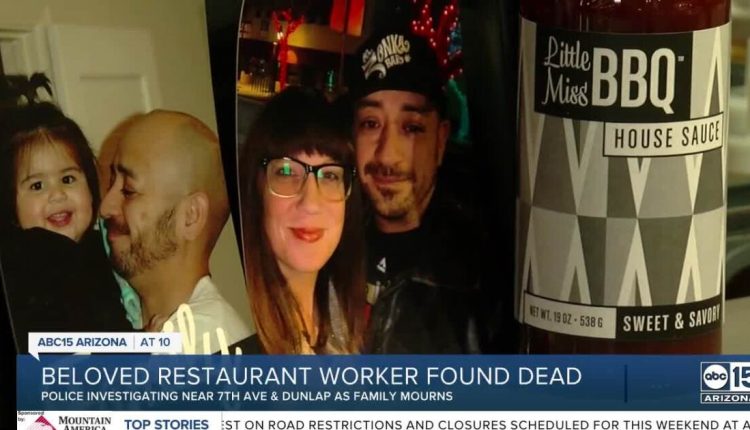 Mourning the loss of a loved one, friend and colleague. A beloved worker at a Valley barbecue staple was found dead in a Phoenix canal.

“I mean to even come in the doors it took a minute,” said Amanda Nash-Jimenez.

The smells inside Little Miss BBQ’s Sunnyslope location are familiar but what she sees is not.

Nash Jimenez’ husband Jose would be behind the counter cutting and handing food to people and helping create smiles.

“It’s heart-breaking. He was such an amazing, amazing man, he was loved by so many. He is so missed,” added Nash-Jimenez.

Together for 18 years and married for 10, Amanda and Jose tried to always spread love and positivity.

“We dated for about four weeks and like crazy 20-year-olds, we moved in together and we have loved each other ever since,” added Nash-Jimenez.

Nash-Jimenez grew nervous when Jose, who rode his bike on the same path to and from work, didn’t arrive home at his usual time.

Phoenix Police told her an SRP employee found Jose’s body in a canal near 7th and Dunlap avenues.

“I just find it hard to somehow believe he ended up in a canal without somebody doing something to him,” added Nash-Jimenez.

“Jose was our right-hand man. Any time we needed him,” said manager and friend Kiara Hernandez.

Already known as a good husband, father and host to a half dozen foreign exchange students, he was a big supporter of children’s charities at the restaurant.

“Obviously, emotionally. But, on the business side, too. He was our fastest cutter,” added Hernandez.

Jimenez’ BBQ team is raising money for their friend and planning his private celebration of life.

“We are going to do whatever we can to make sure Jose’s name still lives within the community,” added Hernandez.

You can help the family by donating to their GoFundMe.