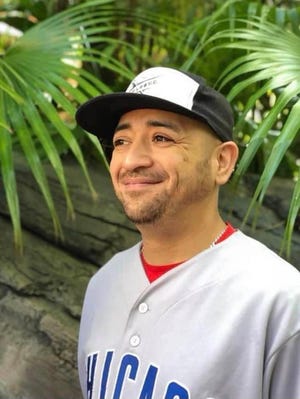 A widow in Phoenix has been leading her own personal two-week investigation into the strange drowning death of her husband.

Jose Jimenez, 47, cooked at many popular kitchens across the valley, including Little Miss BBQ, Welcome Diner and Cloth and Flame. He also participated in foreign exchange programs and other community volunteer programs.

According to his wife, Amanda Nash-Jimenez, Jimenez was always willing to help his community and his family, building relationships with most he met.

“He was so proud to own a house and make a home even though he came from the streets,” she said.

Amanda said detectives showed up at her door the day her husband was found and gave her his backpack, still dripping wet, letting her know he was dead.

An hour later, two officers came around to take the bag back, “They were like, ‘We never DNA swabbed that.’ “

She felt guilty about not having protected the evidence.

“At that moment, I wasn’t playing private detective,” she said, “And I was just thinking about how do I preserve the last items I have of his.”

Police explained that this was a cautionary move on the detective’s part.

Police labeled the case a “death investigation.” Though not now considered an accidental death, that is not final until the case is closed, according to police Sgt. Philip Krynsky. The case will remain open until the final report by the Maricopa County Medical Examiner’s Office in February.

A detective working the night desk under the Violent Crime Bureau had been assigned to the desk but that did not mean that his had been a violent crime or that they believed the case to be suspicious.

According to the Phoenix Police Department operating manual, a death investigation will be assigned to the Violent Crime Bureau if:

But by Tuesday, when medical examiners issued an update, the Phoenix police did not believe any of the above fit the case.

According to Amanda, she saw wounds on Jimenez’s body a few days later that made her wonder about how he died.

The medical examiner’s report has not mentioned those injuries. It only cited alcohol intoxication as a contributing cause, without clarifying. The report has not been finalized. A full report, including the cause of death, will not be released for another 90 days. A complete investigation includes a toxicology report and a review of his medical background, according to Maricopa County spokesman Fields Moseley.

It wasn’t unusual for Jimenez to have a beer after work, but it was unusual for him to have so much to drink he couldn’t bike home, according to Amanda and co-workers.

For now, all that Amanda knows is Jimenez was found somewhere strange and that his bike and cell phone were missing.

She said that since detectives returned to get the bag, she has been confused about his death and the investigation. “That was my first red flag.”

Now a group of six people has been leading a community investigation into his death. These include other chefs and restaurant owners who had worked with Jimenez.

They have traced his past bike routes home, found footage of him biking away from work, requested phone records, tracked possible witnesses, and offered their findings to the detective assigned to the case.

“I guess I come from a community perspective, where it’s like, hey, let’s just help each other, you know, we all have the same goal here,” said Nick Campisano, executive chef at Cloth and Flame.

Campisano, though one of the last people known to see Jimenez leave his work that night, has yet to be contacted for a police interview.

“I understand we live in a day and age where stuff happens, but I still feel like there’s a due process here. We need to put this time in and, you know, follow some tracks and see where it goes, before they go ice cold,” he said.

Jimenez had gotten off from work near Seventh Street and Dunlap Avenue and usually biked home after. A route he shared with his daughter Vanessa in the past.

Jimenez sent Amanda a text telling her he was biking home around 10:20 pm that night.

During those 20 minutes, Amanda believes Jimenez was served one beer at a bar not for from his route.

She spoke to a bartender who served Jimenez, and the bartender explained to her that he had been talking to a man who seemed unstable.

The man talked to Jimenez about money problems, according to the bartender. After Jimenez finished his beer, he left and the man did too.

Though she could not get location information from her phone provider, Amanda got a log of his phone records that showed his phone was not receiving any of her calls at around 11:45 pm.

According to Amanda, his phone could have been turned off or damaged.

The group has asked anyone for camera footage along that route and talked to neighbors and business owners seeking sightings of Jimenez that night.

Now they are asking for anyone in the community with information to come forward and offering a $5,000 reward.

“Though he wasn’t my family member, in a legal stance, he meant a lot to me and everyone on my team. And that’s just the impact that Jimenez had,” Campisano said.

He felt that it was his responsibility that everyone on his team felt safe, and that included everyone getting home after work. “I owe it to the team to find out what happened to Jimenez.”

For Jimenez’s daughter, Vanessa, this is about figuring out whether her husband was murdered or died some other way.

“I need those answers in order for my grieving process to move forward. And I feel like I’m just never going to be able to grieve my father until I know.”

“In order to grieve and be able to actually mourn the loss of such a huge part of our life and our community. It would really help to know more about what happened,” she said.

But for her, this is about something larger.

“If my husband isn’t safe riding his bike for 20 minutes from Seventh Street and Butler Drive to 23rd Avenue, my kids aren’t safe in this neighborhood, his coworkers aren’t safe.”

She remembered Jimenez staying late at Little Miss BBQ to ensure everyone left okay because “he knew that the neighborhood was not safe.”

“This is about my husband, but it’s also bigger. This is a community problem.”

“He would want us to make sure that everyone else is safe, and that nothing else happens to members of our community.”

The family will hold a candlelight vigil on Dec. 3 at 7 am, walking the canal from Central and Alice to where he was found.

On Dec 4, cooks and coworkers from Cloth and Flame will host “Jimenez’s Last Concert Under the Moon,” a benefit dinner and party celebrating his life. The event will take place at The Icehouse in downtown Phoenix from 5 pm to 9 pm featuring food and music.

Jimenez is survived by his wife, Amanda; his son, David, 30; his daughter Vanessa, 28; his granddaughter, Nadia, 8, and his godmother, Maria Lopez.