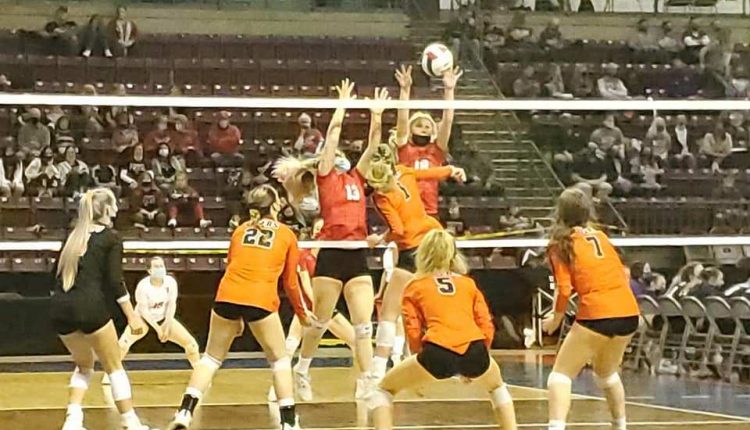 Wiggins Volleyball sure knows how to put on an exciting show.

In their first Class 2A state volleyball tournament on Wednesday morning against Yuma, the eighth seed, the Tigers demonstrated exactly why CHSAA awarded them the # 1 Overall Seed for the competition. They dropped Yuma – who would be a middle-class seed in a normal year – in just three sentences.

However, Yuma made it far from easy.

The Tigers had to earn every single point as the match saw 25-22, 25-21 and 25-23 final results. A late mistake could easily have swayed the games in Yuma’s favor at any point.

“We knew that Yuma had always been a tough team over the years. To be honest, we didn’t play well today. There have been a few things we’ve been working on over the past week, ”said head coach Michelle Baker. “I think that shows how talented they really are, that we can go out and not happy with the performance and know that they definitely have more.”

However, the tigers kept their composure.

Call the Wiggins the comeback kids.

After 18-10 years and struggling with ball control early, the Tigers began to recover. They curbed their ball handling, placed their hits better and stormed back point by point with anger.

It wasn’t long before the Tigers tied Yuma at age 22. They swept the last three points to win the match and stun their opponents 25-22.

“We realized at the time that it was for us to do or to die, to change our momentum, get the negative thoughts out of our heads and step in positively, knowing that we had beaten this team before and that Have the ability to do it again, ”said Bre Gilliland, senior outside hitter.

Baker believes her incredibly young team just lost focus a little before the ladies could regroup.

Wiggins came back even stronger in the second frame.

The Tigers opened the game 7-2, but they knew Yuma would not go down easily. Yuma started arguing again, reaching that mark minutes later when the score was 9-9, then 16-16. A Baker hiatus at that moment resulted in a five-point run by Wiggins that prepared them well for success as Yuma began to lose that lead.

The third and final game turned out to be even more difficult as the two teams competed point by point throughout. Once one team took the lead, the other erased it just minutes later. The last points could have gone either way.

Wiggins took the lead 23-21. Yuma fell out of rotation to give the Tigers an easy match point. Yuma scored the next two points and made the next point for the top seed.

Wiggins did what he had to when freshman outside hitter Tyleigh Fehseke put down the final kill to run away with the 3-0 win. Now the Tigers only have one day left to prepare for their next opponent, No 4 Fowler.

Fowler overtook Vail Christian in four sets (3-1) in Wednesday’s quarter-finals. The Grizzlies have improved to 13-3 over the course of the season and are the conference champions of Santa Fe. Their program includes 13 state championships in school history, numbering second in Colorado history. The last crown came in 2010.

The semi-final game starts at 8 a.m.