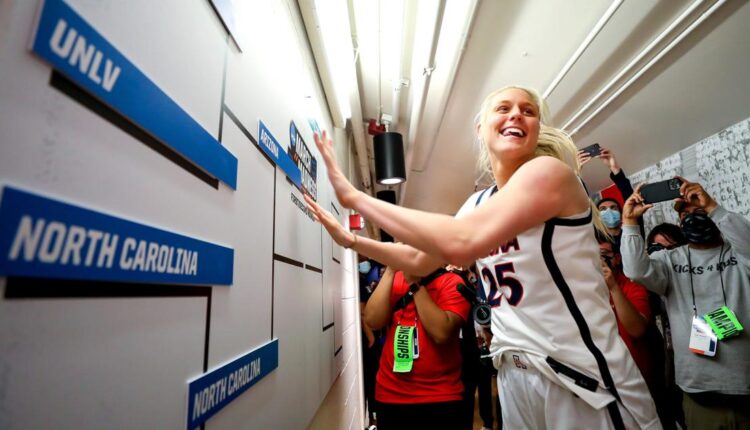 It was a year of evolution for several Arizona Wildcats programs, with incredible highs and some sad lows.

Ultimately, 2022, with all its ups and downs, was yet another great year for Tucson and the UA.

For five months, the Arizona men’s basketball team was a well-oiled machine, with arguably one of the best seasons in program history. The Wildcats got off to an 11-0 start before falling at No. 19 Tennessee last December, then went a stunning 18-2 in Pac-12 play to climb up to No. 2 in the rankings.

Even the conference championship tournament was a breeze for the Wildcats, who beat No. 13 UCLA in the title game.

Lloyd guided Pac-12 Player of the Year Bennedict Mathurin and led Arizona into the Sweet 16, where the Wildcats ran into a brutal matchup in Houston.

Despite the disappointing exit, it was one heck of a debut season for Lloyd.

Caitlin Lowe led the Wildcats to the Women’s College World Series during her first season as head coach.


2. Highs and Lowe: UA softball makes it to WCWS

The men’s basketball team wasn’t the only Arizona program replacing a well-established coach.

In fact, if you think Sean Miller’s shoes were hard to fill, what about Mike Candrea?

But the Caitlin Lowe Era did not get off to the grandest of starts, as the Wildcats lost 11-0 to Alabama in five innings on Day 3 of the season, Feb. 12. And when Arizona hit conference play, it was in for an ever ruder awakening, as the Cats lost their first eight straight Pac-12 games, with sweeps at the hands of UCLA and Arizona State before losing two of three to Washington and at Oregon State. When the Wildcats’ postseason kicked off in Columbia, Missouri, Arizona had lost four of six.

Something clicked for the Cats in Columbia, though, as they beat Illinois on Friday then swept Mizzou on Saturday and Sunday, setting up a Super Regional showdown in Starksville, Mississippi, against Mississippi State. The Wildcats again turned it on with a 3-2 win and a 7-1 closeout victory, clinching their first Women’s College World Series appearance under Lowe and third straight as a program.

As they opened the season against San Diego State at Snapdragon Stadium, not many gave the Wildcats a chance. But Arizona spoiled the Aztecs’ grand opening with a 39-20 win, then held on for a 38-21 win two weeks later over North Dakota State. Another two weeks after that, and the Cats again were victorious, sending them to a 3-2 start (with losses to Mississippi State and at Cal) and tripling their 2021 win total by Oct. 1.

Then came a hard month, with losses to Oregon, Washington, USC and Utah, four of the top five teams in the conference.

Just like they were written off against SDSU on the road, few gave Arizona a chance in Week 11 at UCLA, but the Wildcats waltzed into the Rose Bowl and snuck out with a 34-28 win before closing out the season two weeks later with a 38-35 Territorial Cup win over Arizona State, the team’s first since 2016.

Tetairoa McMillan was a force during his first season with the Wildcats.

What led to all that momentum? Arguably one of the best recruiting classes in Arizona sports history. UA coach Jedd Fisch planted his flag in Southern California, particularly at Servite High School in Anaheim, where the Wildcats landed several key freshman contributors.

That started all the way at the top in stud wide receiver Tetairoa McMillan, the No. 51 prospect in the country and the fourth highest-rated in the state. Serving as the third option in a passing game that featured a pair of 1,000-yard receivers in Dorian Singer and Jacob Cowing, McMillan still managed 702 yards on 39 receptions, with a team-high 18.0 yards-per-catch average and a team- leading eight touchdowns.

Arizona posted the best season in program history in 2020-21, advancing to its first-ever Final Four before losing to Stanford by one point in the national championship game.

The Wildcats then ran it back, hosting the first two rounds of the NCAA Tournament as a No. 4 seeds. Arizona fell to North Carolina in the round of 32, ending standout Sam Thomas’ storied career.

Andy Lopez led the Wildcats to a College World Series title in 2012, finishing 48-17 in what was a dream season. Lopez, who had won a national title with Pepperdine in 1992 and advanced to four other College World Series appearances, appeared destined for the hall of fame. Earlier this month, the College Baseball Foundation announced his selection into the National College Baseball Hall of Fame. The former UA coach will travel to Omaha in February for the induction ceremonies.

Arizona’s big high school recruiting class paid instant dividends for the Wildcats in 2022. But it was the arrival of transfer portal entrants Jayden de Laura and Jacob Cowing that truly turned things around.

De Laura, the 2021 Pac-12 Offensive Freshman of the Year at Washington State, found a top target in wide receiver Cowing, who starred for UTEP before arriving in Tucson.

Bull fighter Nate Jestes takes a flying leap over bull during a demonstration to wrap up the last of the events on the opening day of La Fiesta de los Vaqueros.

The 2021 La Fiesta de los Vaqueros was canceled because of the coronavirus pandemic, marking just the second time in the Tucson Rodeo’s 95 years that a year was skipped.

The Tucson Rodeo Parade returned Feb. 24 after the 2021 parade and rodeo were postponed.

The Rodeo returned in 2022, a point of celebration for the event planners.

Bijan Robinson starred at Salpointe Catholic High School before signing with the University of Texas. He emerged as one of the top college running backs in the country in 2022.

Robinson announced this month that he will leave school early and turn pro. He is expected to be among the top picks, and likely the first running back selected, in the upcoming NFL draft.

10. Hale to the chief: Wildcats legend leads team to Regionals

Jay Johnson left Arizona for LSU following a 2021 College World Series berth. He took some great talent with him to Baton Rouge, but didn’t exactly leave the cabinets bare.

First-year coach Chip Hale kept the Wildcats afloat with a 39-25 record and a near-miss in the NCAA Regionals, when the team made it to the elimination game against Ole Miss before falling 22-6.

Pedestrian struck by car in south Phoenix dies from injuries