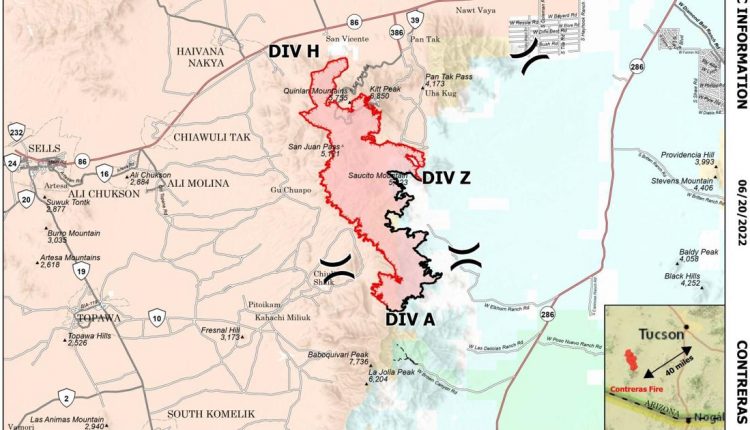 The Contreras Fire, burning southwest of Tucson, grew to about 20,000 acres as of Monday as crews worked to keep the northern edge of the fire south of Arizona 86.

The fire started June 11 on a remote ridge of the Baboquivari Mountain range, north of the Baboquivari Peak, 20 miles east of Sells, on the Tohono O’odham Indian Reservation. It destroyed four structures on site of the Kitt Peak National Observatory last Friday, but did not damage the telescopes or other scientific facilities, officials have said.

Fire officials Monday were worried about the weather, especially lightning that could spark other fires. Weather weather was expected to move into the area later this week, according to an update from the Eastern Area Incident Management Team.

In the north portion of the fire, ground crews were being aided by aircraft dropping retardant and water to keep the fire south of Arizona 86 and west of the community of Pan Tak, which was previously evacuated. Crews were working with the communities of Pan Tak and Hayhook Estates to develop a structure protection plan.

West of Pan Tak and Pan Tak Pass, bulldozers and hand crews will remove brush and grass on existing road systems to reduce the threat of fire spread. The fire is expected to flank toward Kitt Peak Road and Coyote Mountain Wilderness due to a shift in winds. Crews will focus on defensive firing operations below Kitt Peak Observatory.

Very little smoke can be seen in the area. Monitoring of the fire in the south and the west will remain a priority, but very little fire activity is anticipated.

There are more than 350 personnel assigned to the fire as well as numerous aircraft.

By allowing community choice energy, Arizona could take advantage of its solar potential