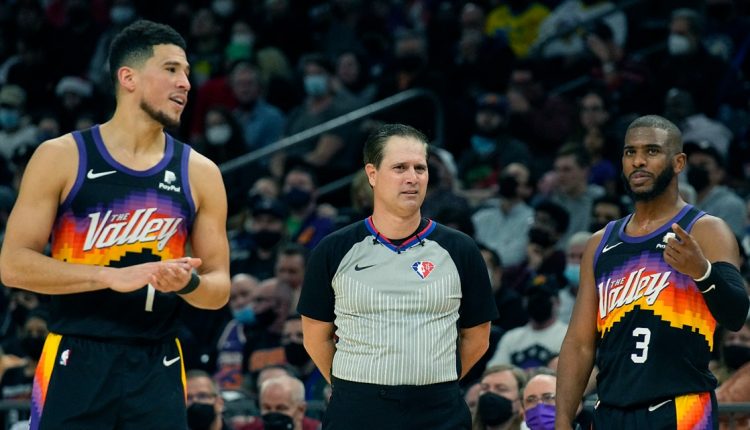 The Suns have the best record in the NBA and are picking up where they left off last year. But why aren’t they considered the NBA’s top contenders?

PHOENIX — For a second straight season, the Phoenix Suns show they belong in the NBA title contender conversation.

They had the second-best record in the NBA last season, after a woeful playoff drought. They even made it to the NBA Finals, where they lost to the Bucks.

Now they are back at the top of the NBA. Also significant. Midseason, the Suns have the NBA’s best record at 37-9, four games ahead of the Warriors and seven games ahead of anyone else in the Eastern Conference.

But here they are once again being overlooked as an NBA title favorite. The Suns aren’t even in the top three of NBA title odds, according to Vegas, sitting behind the Nets, Warriors and Bucks.

On Wednesday’s Locked On Today podcast, Brendon Kleen of the Locked On Suns podcast spoke with Peter Bukowski about the Suns’ efficient first half of the season and why people still doubt them.

SUBSCRIBE TO: The Locked On Today podcast hosted by Peter Bukowski gets you on track every morning greatest stories in sport without taking up your free time.

Kleen said he thinks some of the Suns’ perception likely carries over from last year’s NBA Finals, when many said they had the easiest path to the NBA Finals in the playoffs.

“I think it’s a bit of a carryover from the narrative that followed them last postseason, the fact that they should have been lucky. I don’t think you can still argue that case,” Kleen said in Locked On Today. “They’re basically two regular seasons where they’re one of the most dominant, deep and chemistry-filled teams in the league. They have two clutch time killers, Chris Paul and Devin Booker. There really may not be two players on the same team that are as good as these two at clutch moments in the entire NBA.”

“Maybe it’s just the people not catching up, I don’t know, they play a lot of national televised games, they beat the good teams when they have to attend to business, I don’t have a good answer,” Kleen continued.

SUBSCRIBE to the Locked On Suns Podcast, your daily Phoenix Suns podcast. Free and available on all platforms including YouTube.

Kleen said what handicapped the Suns in last year’s NBA Finals was the fact that the Bucks had three players who played like stars in Giannis, Khris Middleton and Jrue Holiday, while the Suns lacked that extra star power when Devin Booker and Chris Paul struggled down the stretch of the final.

Kleen says we’ve seen more of Mikal Bridges and DeAndre Ayton this year, which will be essential for another Suns title run, but there hasn’t been enough to call either of them a third star.

But what helped the Suns even more is the additional development of Devin Booker, Kleen said.

“I think Devin Booker’s progression was really the biggest story in terms of lifting the ceiling on this team,” Kleen said. “He’s taking and making more three-pointers, he’s reduced his turnovers, he’s maybe a little more equal as a playmaker with Chris Paul than he was last season.”

Another thing that may help the Suns make it back to the Finals for the second straight year is that the Western Conference doesn’t have the crowd of legitimate competitors that you have in the East.

“I don’t think the path is the same this season,” said Kleen. “The West looks very different, I would honestly say it’s not as scary and not as deep as the East.”

Chris Paul and Devin Booker are putting together All-Star campaigns again. Paul averages over 10 assists per game while Booker leads the team with an average of 24.5 points per game.

The Suns have a big game against the Jazz Wednesday night in Utah after their Monday night matchup in which the Suns came out on top. Tune in to the Locked On Suns podcast for pre-game and post-game coverage of each game.

SUBSCRIBE to the Locked On NBA Podcastyour daily podcast for league-wide news, rumors and more.