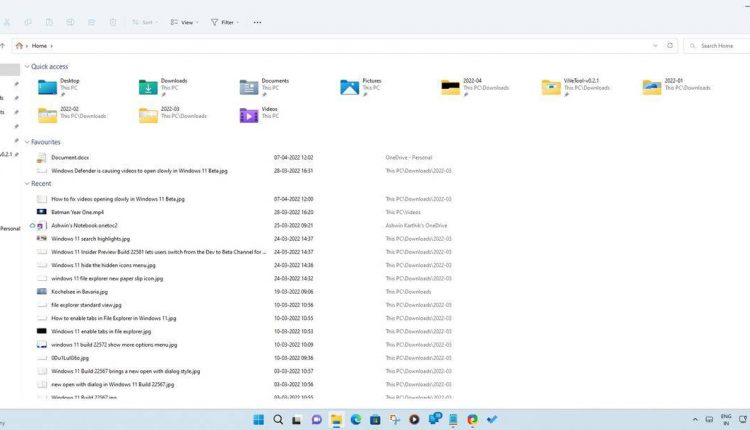 Windows 11 Insider Preview Build 22593 is now available for users in the Dev Channel. It brings some features that were announced in the recent Windows 11 event, along with various bug fixes.

The Home page for File Explorer is the new start screen for the built-in file manager. It consists of three sections: Quick Access, Favorites, and Recent. Quick Access is more or less similar to the legacy version. The Favorites section contains your pinned files, you can drag-and-drop files to pin them, it supports files stored on your computer and those available in the cloud in your OneDrive account. Recent files, as the name suggests, lists the files that you opened recently. The content in Recent and Pinned Files are searchable from File Explorer’s search tool.

Tabs in File Explorer were announced in the recent event, but are not here yet in this build.

Microsoft Journal in the Pen Menu

A new icon is available in the Pen Menu, for the Microsoft Journal app. Clicking the icon will download the app from the Microsoft Store if you don’t have it installed on the computer.

Pressing the hotkey WIN + Z to access the snap layouts panel now displays a number over each layout. Hit the number key to apply the corresponding layout quickly. 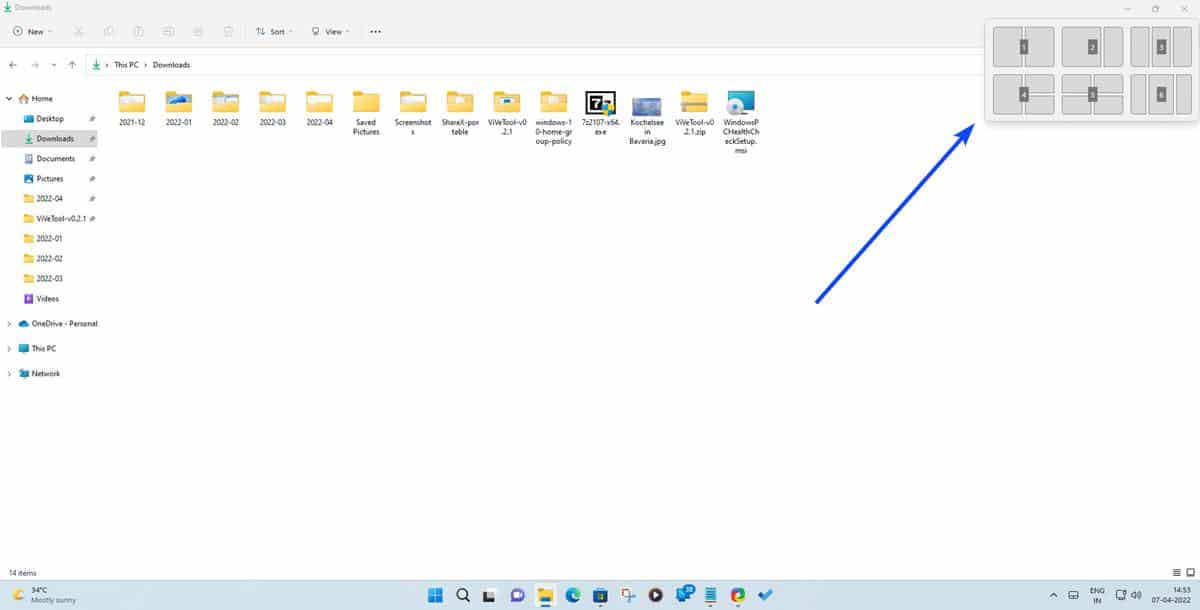 The Focus timer allows you to session lengths in 5-minute increments, for sessions that are less than 30 minutes long. So you can set mini-sessions ranging from 5 to 25 minutes, directly from the Focus control buttons in the Notification Center. 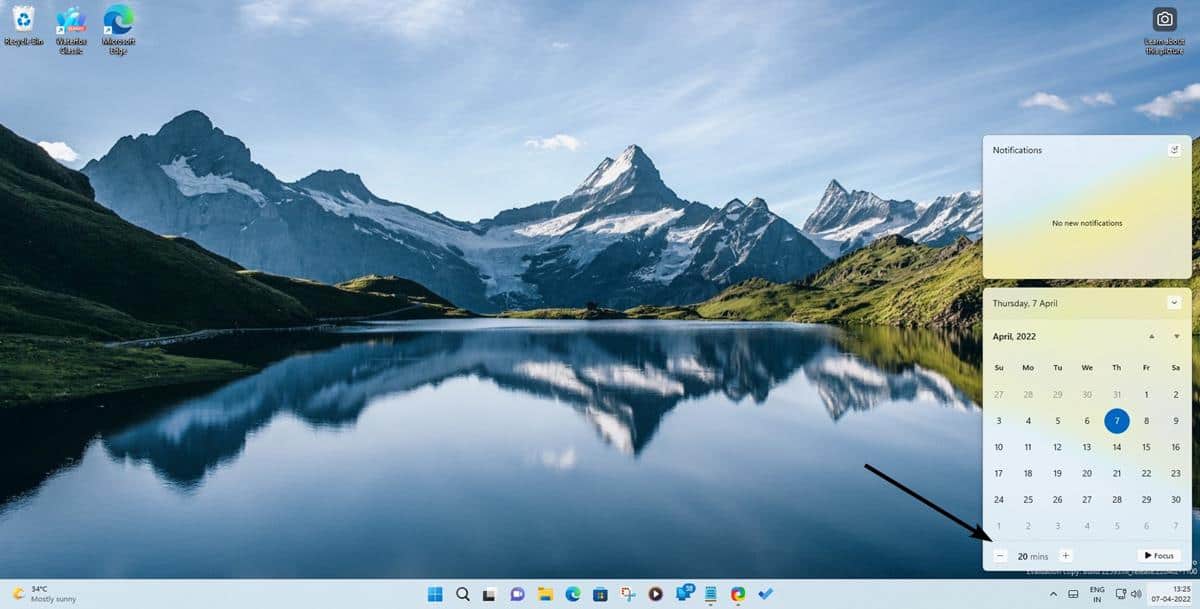 Windows 11 will start alerting users when the Memory Integrity option listed under Windows Security’s Device Security > Core isolation page is turned off. You can enable the option to strengthen your device’s protection against malicious attacks. It is worth mentioning that many users around the internet have experienced lags, performance issues, when the setting is enabled. So, use it at your discretion.

Microsoft says it fixed some issues that were impacting the reliability of Explorer.exe, it was crashing in a loop for some users and failed to load. Moving icons on the Taskbar is a more fluid process than before, it seems responsive and the animation is faster, and icons should no longer be duplicated or get stuck when opening or closing an app. Icons will not overlap the date and time in multi- monitor setup. The Taskbar’s auto-hide setting will work more consistently. The tablet-optimized taskbar will be visible when full screen apps are opened, and will be hidden when you collapse it. A bug that was causing the taskbar to crash in Tablet optimized view has been patched. The Notification Center should launch more reliably, and display the contents properly.

Folders in the Start Menu are a bit bigger to make it easier to see the icons inside them, without opening the folder. Hitting Escape while renaming a folder will dismiss the action. The Win + X menu has been optimized to work more reliably. The memory usage of the Search Indexer has been improved, and a couple of bugs that were affecting the Search window from opening or getting stuck have been patched.

The change-log reveals that an issue that was causing increased launch time for certain file types has been mitigated, it is unclear if Microsoft is referring to video files opening slowly in the previous flight. The latest build addresses a black screen issue in certain full screen games with Auto HDR enabled.

Right-clicking on a file to rename it may cause Explorer.exe to crash, users can use the rename button in the Command Bar as a workaround. An issue that is causing internet connectivity issues in apps when connected to some VPNs is being investigated. Microsoft says that devices using Windows Information Protection (formerly EDP) policies won’t be able to access controlled data via protected apps such as Outlook, Word, Microsoft Edge, etc. in this build. It is advising users to pause updates temporarily to prevent updating to Build 22593. Users who have installed the new build should roll back to the previous build to restore access to the data.

Please refer to the release notes for the full list of fixes and known issues in Windows 11 Build 22593.

The wallpaper in my VM was replaced with a black background (Personalization > Solid color) after installing the update, I was using Windows Spotlight earlier, and had to enable it again from the Settings. I mentioned that Tabs in File Explorer are not included in this build, you can’t enable them using the Vivetool trick. Microsoft recently removed the ability to rearrange icons in the system tray, this has not been fixed in Build 22593. The Start Menu’s animation seems to have improved in the current build, and opens instantly. 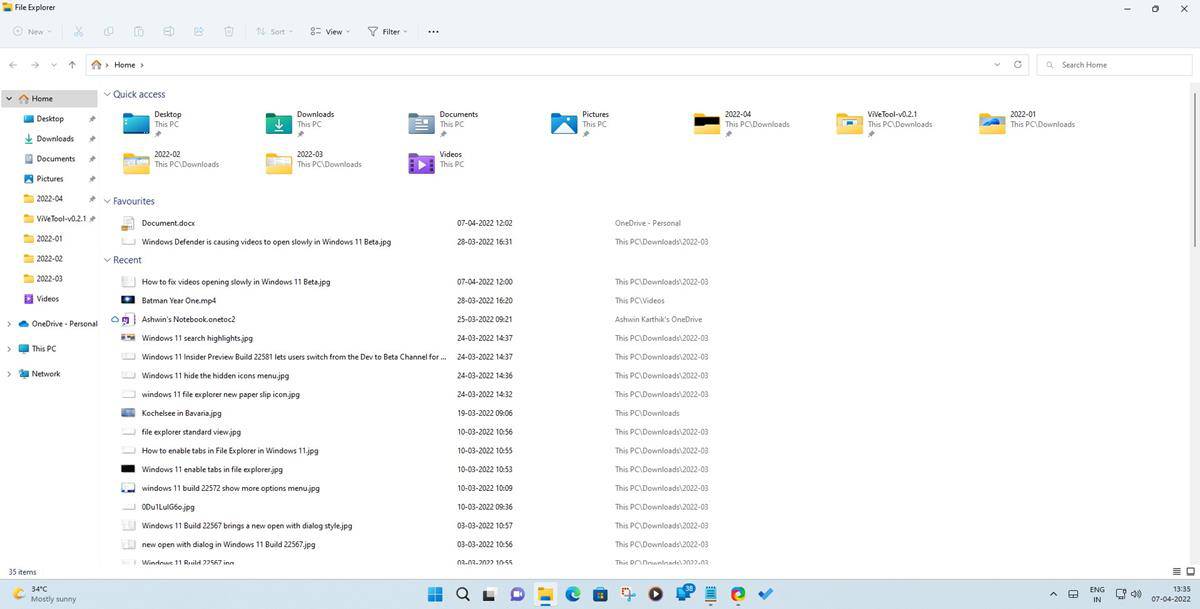 Windows 11 Insider Preview Build 22593 has been released to the Dev Channel. We take a look at the new features in it including the Home page for File Explorer.