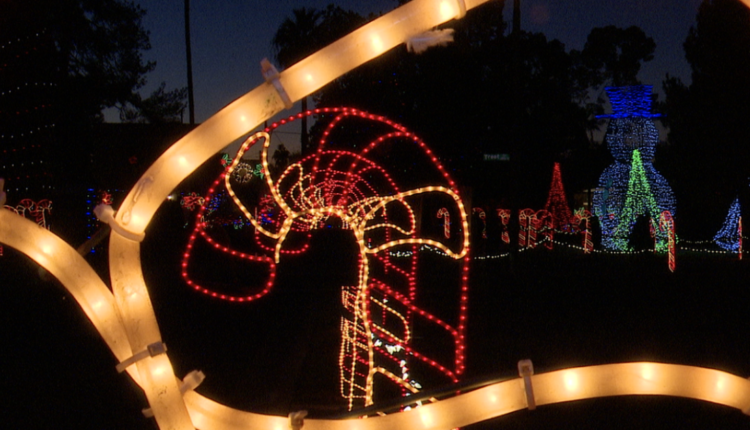 TUCSON, Ariz. (KGUN) — T’was a few weeks before Christmas and all throughout the houses on Winterhaven, not a creature was stirring, not even a mouse. Well, maybe a few creatures like the trolls and gnomes decorations at a few of the houses.

The Winterhaven Festival of Lights kicked off with an opening ceremony that included music from a mariachi band and counting down to light up a Christmas tree.

Emma Sawyer had never been to Winterhaven and enjoyed all of the lights and getting to spend time with loved ones.

“I’m having a lot of fun. I really like the zoo that’s over right over here, hanging out with my sister and some friends drinking hot cocoa. We’re having a great time!” Sawyer said.

The zoo she was referring to is Jim Tofel’s lawn. He had light displays that featured polar bears, lions, penguins, and even a mermaid!

Tofel has been participating in the festival for about 20 years and said he also owns the house next to him that features a Disney princess Christmas theme.

He said he enjoys the way the festival brings everybody together.

“Everybody’s happy. It just gets you in this holiday spirit.” he said

He said every year, he along with neighbors try and get more creative than the year before.

“We have competitions within the neighborhood and so everybody is always trying to outdo each other to get the awards. It’s kind of a sense of pride,” Tofel said.

Austin Baldwin also owns a house in Winterhaven and decorated his house with red and white lights that went on and off to some Christmas music. He also had Santa and Mrs. Clause in some old fashioned cars on his lawn.

“My favorite part about setting up the lights is the end result. The end result is definitely the best part because you get to see everyone enjoy it, and see all the kids mostly and they have a lot of fun with it,” Baldwin said.

The festival is collecting food for the Tucson Community Food Bank until December 26 and there will be people at each entrance to collect it.